How Azerbaijan kept the memory of Khojaly alive 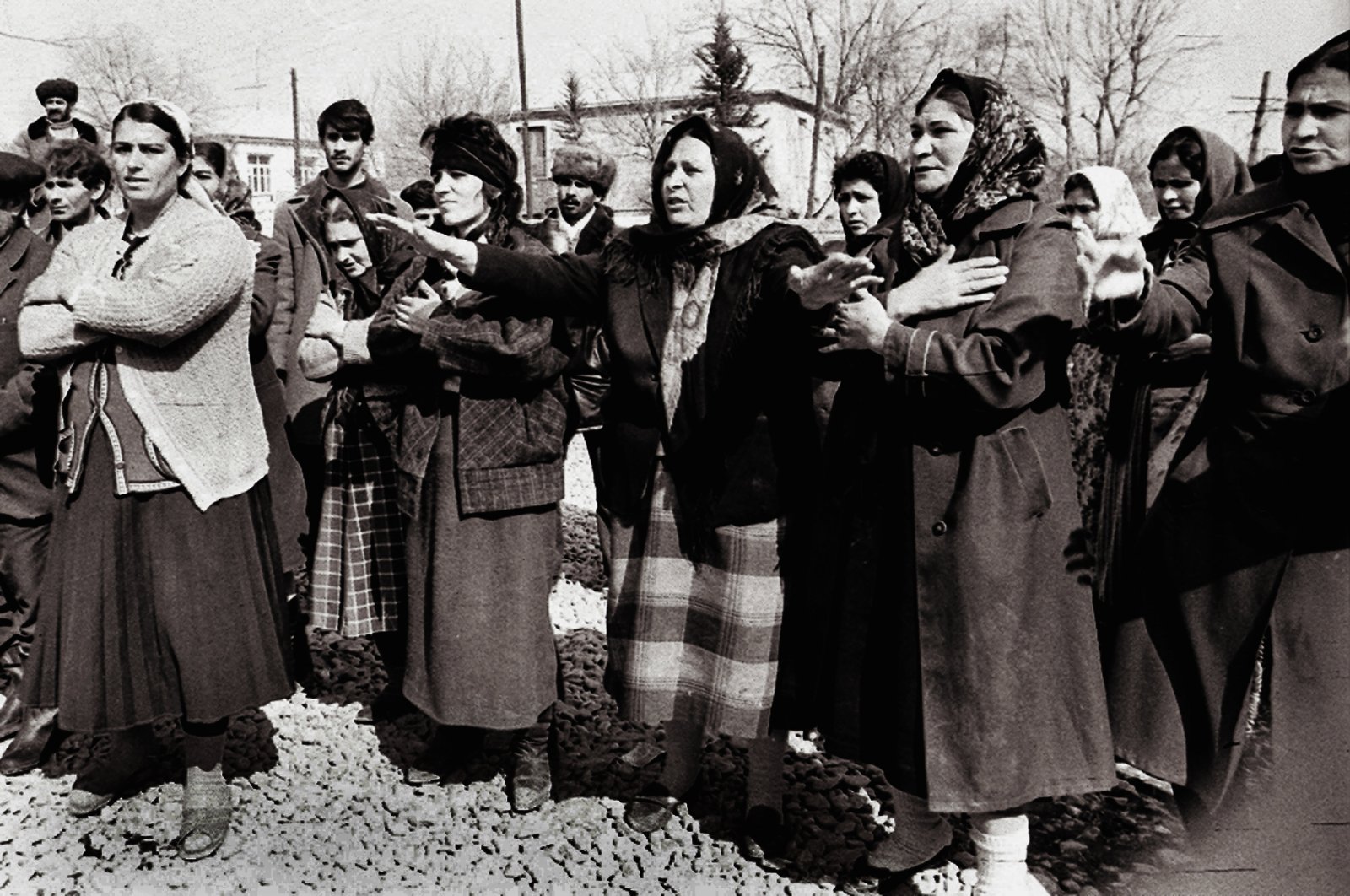 An archive photo shows people grieving for the massacre of ethnic Azerbaijanis by Armenians in the town of Khojaly, Nagorno-Karabakh, Azerbaijan, February 1992. (AA Photo)
by Hamza Karcic Oct 14, 2020 12:05 am

The ongoing fighting in Nagorno-Karabakh stirs up memories of Khojaly. This is a look at how Azerbaijan sought to internationally commemorate the crime committed almost three decades ago

During the Azerbaijani-Armenian war over Nagorno-Karabakh (1992–1994), one particular location was to emerge as the site of a major tragedy. In late February 1992, Armenian forces attacked the village of Khojaly in an attempt to take control of a nearby airfield. Khojaly had been under a blockade for a few months and was only lightly defended. As the village was attacked and its Azerbaijani inhabitants started to flee, they were gunned down by Armenian forces. Several hundred perished in this atrocity, which has since been termed the single worst massacre in the Nagorno-Karabakh war.

Khojaly, which emerged as the site of Azerbaijani suffering during the war in the early 1990s, has been annually commemorated since. Over the past years, Azerbaijanis across the globe have been undertaking efforts to commemorate the tragedy internationally. These atrocities have been a sorrowful wound in the Azerbaijani collective memory ever since. Azerbaijani diplomacy has since sought to disseminate information on Khojaly to achieve international recognition and condemnation of this atrocity.

Azerbaijan undertook efforts to internationally institutionalize the memory of the Khojaly massacre by making the commemoration of this event an integral part of its foreign policy. A series of events, rallies and photo exhibitions dedicated to the Khojaly victims have taken place in locations from Turkey to Mexico. A series of monuments commemorating Khojaly has similarly sprung up in Europe, from Bosnia to the Netherlands.

The quest for international recognition and commemoration of the atrocities takes several forms including (i) annual commemoration of the tragedy of Khojaly in cities around the world, (ii) the adoption by national parliaments of resolutions on Khojaly, and (iii) the construction of memorials and monuments dedicated to the Khojaly victims.

On the occasion of the 20th anniversary of Khojaly Massacre, a rally was held in Istanbul’s Taksim Square, where an estimated 100,000 people took part. This was the largest protest held outside Azerbaijan. Similar demonstrations were also held in Ankara and other Turkish cities.

A major public awareness campaign was held in the U.S. in February 2013. Organized by the Azerbaijan American Alliance, the campaign included posters reading, "Khojaly ... A Human Tragedy Against Azerbaijan," that appeared in nine metro stations in the Washington, D.C. area. Furthermore, mobile projections of the posters on buildings and mobile billboards were also featured in the campaign.

As of mid-2013, an increasing number of national parliaments have passed resolutions condemning the Khojaly massacre. According to Azerbaijani media reports, resolutions had been passed in Pakistan, Columbia, Mexico, Turkey, Bosnia, Serbia, Romania and the Czech Republic. According to Azerbaijani media reports from early July 2013, the Senate of Jordan also condemned the atrocities.

In the U.S., state legislatures in Arkansas, Mexico, Massachusetts, Texas, New Jersey, Georgia and Maine adopted resolutions on Khojaly. In the U.S. Congress, legislators friendly to Azerbaijan have issued statements for congressional record remembering the Khojaly victims. Several years ago, a petition urging the White House to commemorate Khojaly received more than 125,000 signatures. Several legislators in the U.S. Congress have also commemorated Khojaly in their speeches or remarks for the congressional record, which began in 2005.

In February that year, Congressman Dan Burton said: “Khojaly was a little known small town in Azerbaijan until February 1992. Today it no longer exists, and for people of Azerbaijan and the region, the word 'Khojaly' has become synonymous with pain, sorrow and cruelty."

The Khojaly tragedy has also been commemorated in the Balkans. In Bosnia-Herzegovina, the House of Representatives adopted a resolution "respecting and acknowledging the sovereignty and territorial integrity of the Republic of Azerbaijan." A similar proposal was tabled in the upper house (Dom Naroda) on Feb. 26, 2013. This resolution expressed support for Azerbaijan's territorial integrity and called for an immediate and unconditional withdrawal of Armenian troops from occupied Azerbaijani territories. It further condemned the atrocities against the civilian population in the town of Khojaly.

Khojaly is also commemorated through the construction of monuments and memorials dedicated to victims. Memorials to Khojaly were opened in Berlin, The Hague and Mexico City.

The memorial in Mexico City became contentious in 2012. A gift of Azerbaijan, the restoration of a park in Mexico City included a statue of Azerbaijan's first president, Heydar Aliyev. Though such statues were also set up in Ukraine, Russia, Egypt, Turkey, Georgia, Serbia and Romania, in Mexico City there was a grass-roots campaign to remove the statue. Azerbaijan’s embassy in Washington blamed the discontent on Armenian activists in Mexico.

In the Balkans, the Heydar Aliyev Foundation initiated the construction of the Khojaly memorial in Bosnia-Herzegovina. The Azerbaijani-Bosnian friendship park in Sarajevo, which opened in late February 2012, is dedicated to the victims of the war in Bosnia and the victims of Khojaly.

The frozen conflict that had been neglected by many for years has captured global attention over the past week. The perils of the separatism of the 1990s are all too clear.