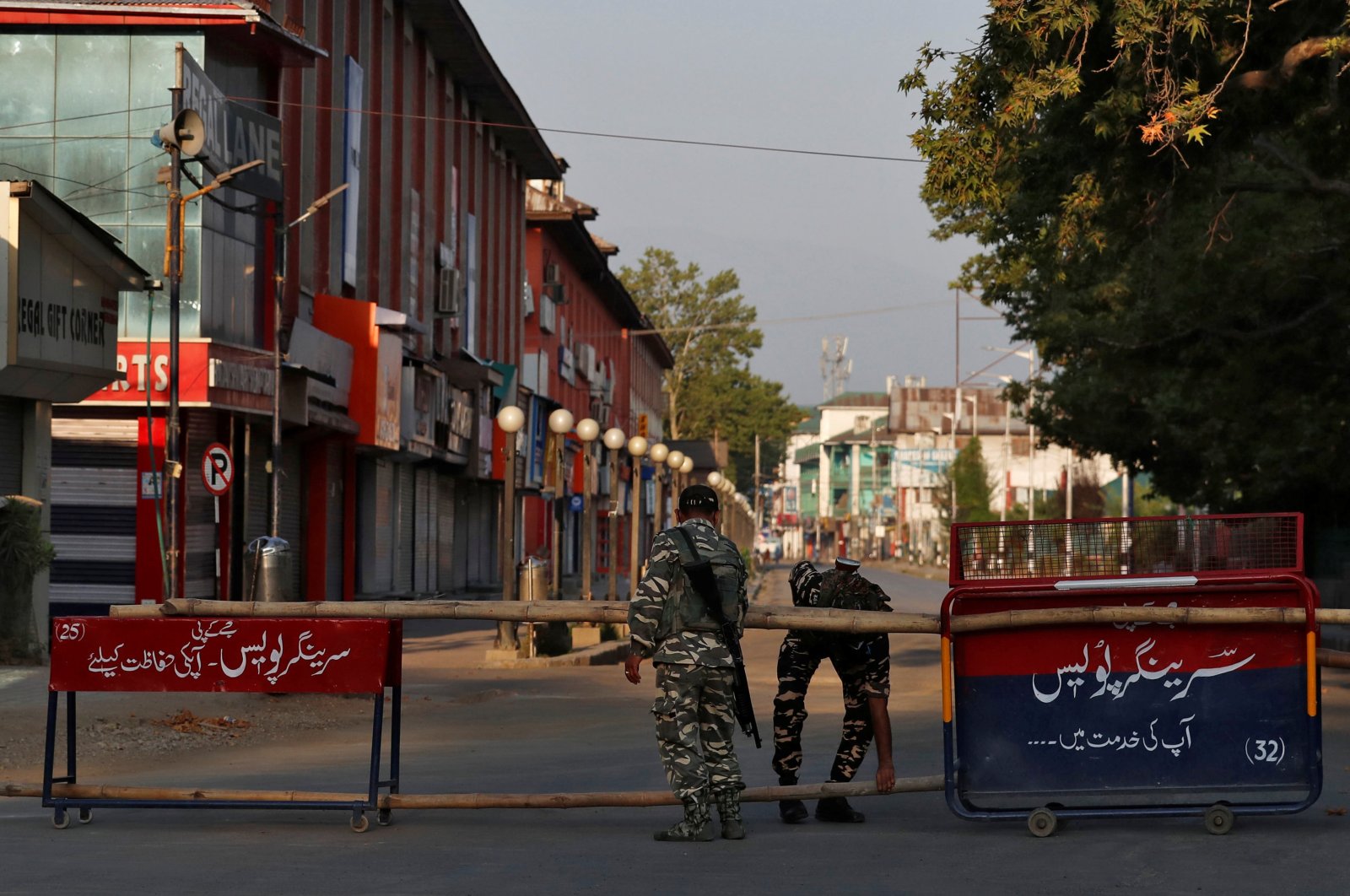 Indian officers put up a roadblock on an empty street during a lockdown on the first anniversary of the revocation of Kashmir's autonomy, in Srinagar, Aug. 5, 2020. (Reuters Photo)
by Nasir Qadri
Aug 27, 2020 12:05 am

Kashmir is fighting for its United Nations-guaranteed right to self-determination and to put an end to India's decadeslong military occupation of the region.

The Kashmiri dispute is categorized as an international armed conflict involving India and Pakistan. Both countries have fought three major wars – in 1948, 1965 and 1991 – over Kashmir. Indigenous armed groups in Jammu and Kashmir have also been fighting against Indian rule since the late 1980s.

According to several human rights organizations, thousands of people have been killed in the conflict since 1989. There are reports of torture, enforced disappearances, rape, arbitrary detentions and the use of lethal weapons on civilians, along with media censorship and attacks on journalists.

According to a U.S.-based independent nongovernmental organization (NGO), the Committee to Protect Journalists (CPJ), 27 journalists have been killed specifically for their work in India since 1992, while over 77 journalists and media workers were killed in general between 1992 and 2018. Though a motive was established in some of the killings, other investigations have been left with loose ends.

“The general trend is toward the deterioration of the working conditions of journalists covering armed conflict/resistance movements in Indian-administered Kashmir. Covering the Kashmir conflict has become more dangerous for journalists – over the years, several Kashmiri journalists have been killed and many arrested,” the CPJ said.

The number of incidents of violence against journalists in occupied Kashmir is staggering. Since 1990, 19 journalists have been killed in Jammu and Kashmir. Their deaths have come at the hands of “unidentified” gunmen, paramilitary forces, state police and the Indian Army. Given the perceived threat of the state, a Kashmiri journalist faces significant self-censorship in the conflict-ridden region.

Since the death of Burhan Wani, the popular rebel commander of the Kashmiri-based militant group Hizbul Mujahideen, in a 2016 shootout with Indian armed forces, armed militancy in the disputed region has witnessed a new resurgence.

In response, the Indian government has multiplied its anti-insurgency operations. In its first-ever report on the situation in Kashmir issued in 2018, the U.N.’s Office of the High Commissioner for Human Rights detailed the alleged human rights violations.

According to the 49-page report, Indian security forces have used excessive force leading to many civilian deaths and injuries since 2016. The report also called out the restrictions on the right to freedom of expression and reprisals against human rights defenders and journalists imposed by the Indian government in the occupied Kashmir.

Following the unilateral, illegal abrogation of Article 370 and Article 35-A of the Indian Constitution, which provided limited autonomy to the state and the downgrading of the former state into two federally governed union territories on Aug. 5, 2019, journalists have been harassed, intimidated and detained under counterterrorism laws irrespective of their organizations or experience.

In April 2020, cyber police in Kashmir booked three Kashmiri journalists, Masrat Zahra, Gowhar Geelani and Peerzada Ashiq, under various anti-terror laws. Zahra was suspected of offenses under Section 13 of the Unlawful Activities Prevention Act (UAPA), which refers to those who commit, advocate, abet or incite the commission with any unlawful activity, as well as Section 505 of the Indian Penal Code, which punishes those who induce others to commit an offense against the state or against public tranquility.

Meanwhile, the accusations against Geelani were based on social media posts. According to police, the posts glorified “terrorism” in Kashmir and were "prejudicial to the national integrity, sovereignty and security of India." The charge leveled against Ashiq referred to a piece written in The Hindu daily. Ashiq was summoned to the Srinagar police station in Kashmir, and subsequently to the Anantnag police station in South Kashmir, where he was interrogated about the report. It still remains unclear which laws Ashiq was detained under.

Human rights defenders believe that Zahra, Ashiq and Geelani are being targeted for their honest documentation of the lives of the Kashmiri people.

“The almost-simultaneous opening of three investigations reflects a deliberate desire by the Indian police to not just harass the three journalists targeted by the complaints but to thereby intimidate all reporters trying to work freely in Kashmir,” Daniel Bastard, the head of the Asia-Pacific desk at the international nongovernmental organization (NGO) Reporters Without Borders (RSF), said in a statement on April 19.

Last December, a group of journalists was manhandled by the state police while they were covering a demonstration in the capital city, Srinagar. Azaan Javaid, a reporter, told an Indian media outlet that during the protest they saw police detaining some boys, who were not the part of the protests. “We tried to click the video and in the meantime, police came and thrashed us,” he told Indian news website The Wire.

Anees Zargar, another reporter who was beaten, said a police officer acted out of a personal vendetta against him. “(The police officer) saw me and said, ‘I am the official you wrote a story about,'” Zargar told The Wire.

On Aug. 14, 2019, Irfan Ahmad Malik, a local journalist, was picked up by Indian forces from his residence in the Pulwama district in southern Kashmir during a midnight raid and was detained at a local police station. He was released after two days. The police, however, never specified the grounds on which he had been arrested.

Besides physical attacks, the Indian authorities in Kashmir have resorted to covertly silencing the journalists in Kashmir. This list is long. Almost on a daily basis, journalists in Kashmir are summoned, held hostage and shot at, while their family members are harassed and even arrested. Many other times, the harassment has been much subtler, by means of restricting the advertisements of newspapers, not allowing officials to give statements to journalists and not inviting reporters to important news briefings, thus killing their stories.

This particularly worrying situation prompted RSF to issue a statement last year, on the 100th day of the blackout on all communications in the besieged valley. RSF stated that there were constant violations of freedom of the press in India, with police violence against journalists and political activists.

In this regard, it is necessary to reaffirm the illegality of attacks on journalists and news media and to remind the authorities of their obligation to take precautions when perpetrating attacks that might affect journalists.

In addition to the power of governments to control the media, journalists’ assignments in armed conflicts are becoming increasingly dangerous due to two further controversial factors: firstly, the ever-developing and increasing technology used in war and secondly, the insatiable demands of the public to be provided with first-hand and close-up news stories around the clock.

In the months following the unilateral and illegal abrogation of the semi-autonomous status of the state in 2019, defenders and journalists reporting on violations were threatened, harassed and intimidated.

Journalists in Kashmir have even been fired at with pellet guns. They face constant surveillance and are regularly summoned to police stations and questioned about their reports and their sources of information.

War correspondents are in an almost impossible situation in which they have to try to please opposing interests of governments and demanding audiences while attempting to stay safe from increasingly high-tech military attacks. Recognizing the vital yet endangered role that journalists play in armed conflicts, the question arises as to whether journalists enjoy sufficient legal protection from dangers inherent to reporting on armed conflicts.

Even if the media is used for propaganda purposes, this cannot be deemed a military objective. The illegality of attacks on journalists and news media derives from the protection granted to civilians and civilian objects under international humanitarian law, so both journalists and their equipment benefit from the general protection enjoyed by civilians and civilian objects unless they participate in a military reaction.

India is a party to all four Geneva Conventions and entered the Geneva Convention Act of 1960 into its domestic legislation. The act obliges India to implement and respect all humanitarian laws and treaties.

According to the rule 34 of the study on customary international humanitarian law, civilian journalists engaged in professional missions in areas of armed conflict must be respected and protected as long as they are not taking a direct part in hostility. This protection remains almost the same in international and non-international armed conflict.

Resolutions and declarations have been undertaken within the U.N. system to prevent acts of violence against journalists including UNESCO Resolution 29 (1997), U.N. Security Council Resolution 1738 (2006), the Medellin Declaration, (May 4, 2007) and the Declaration on the Safety of Journalists (2009).

The resolutions condemn attacks on journalists in conflict situations and urge member states to investigate all acts of violence in which journalists fall victim, release detained journalists and sign and ratify the Additional Protocols I and II of the Geneva Conventions and Rome Statute of the International Criminal Court (ICC).

Faced with a general trend toward a worsening of the conditions in which journalists exercise their profession – and particularly since the conflicts in Iraq and Afghanistan – various professional organizations have launched protection and mutual aid initiatives.

RSF has drawn up a declaration on the safety of journalists and media personnel in situations involving armed conflicts. Recalling the principles and rules of international humanitarian law protecting journalists and the news media during armed conflicts, the declaration proposes improvements to the law in line with present-day requirements. The RSF has launched a number of initiatives to help journalists working in conflict areas. Those initiatives range from lending bulletproof vests and helmets to a free press SOS hotline for journalists in trouble and training for reporters going into war zones.

In addition, RSF, in partnership with UNESCO, compiled a “Handbook for Journalists” for those going to dangerous parts of the world, listing international norms protecting them and containing practical advice on how to stay alive and safe.

Meanwhile, since 1985, the International Committee of the Red Cross (ICRC) has been operating a hotline to provide assistance for journalists on dangerous assignments.

The ICRC can provide journalists with the following types of protection: obtaining information from parties to the conflict and any other source on journalists; passing on information to the journalist's family; enabling the journalist and his or her family to exchange family news, possibly via Red Cross messages; and helping to repatriate them if no other intermediary is available. Plus, the ICRC organizes regular international humanitarian law training sessions for journalists.

The media in Kashmir has, over the years, operated under tremendous hardship and, since August 2019, the situation has worsened.

While many local news organizations and journalists in Kashmir have given up due to state pressure and the media's dependence on government advertisements, a younger cohort of journalists is opting for alternative models to ensure their media enterprises succeed.