Idlib and a watershed moment for NATO-Turkey relations 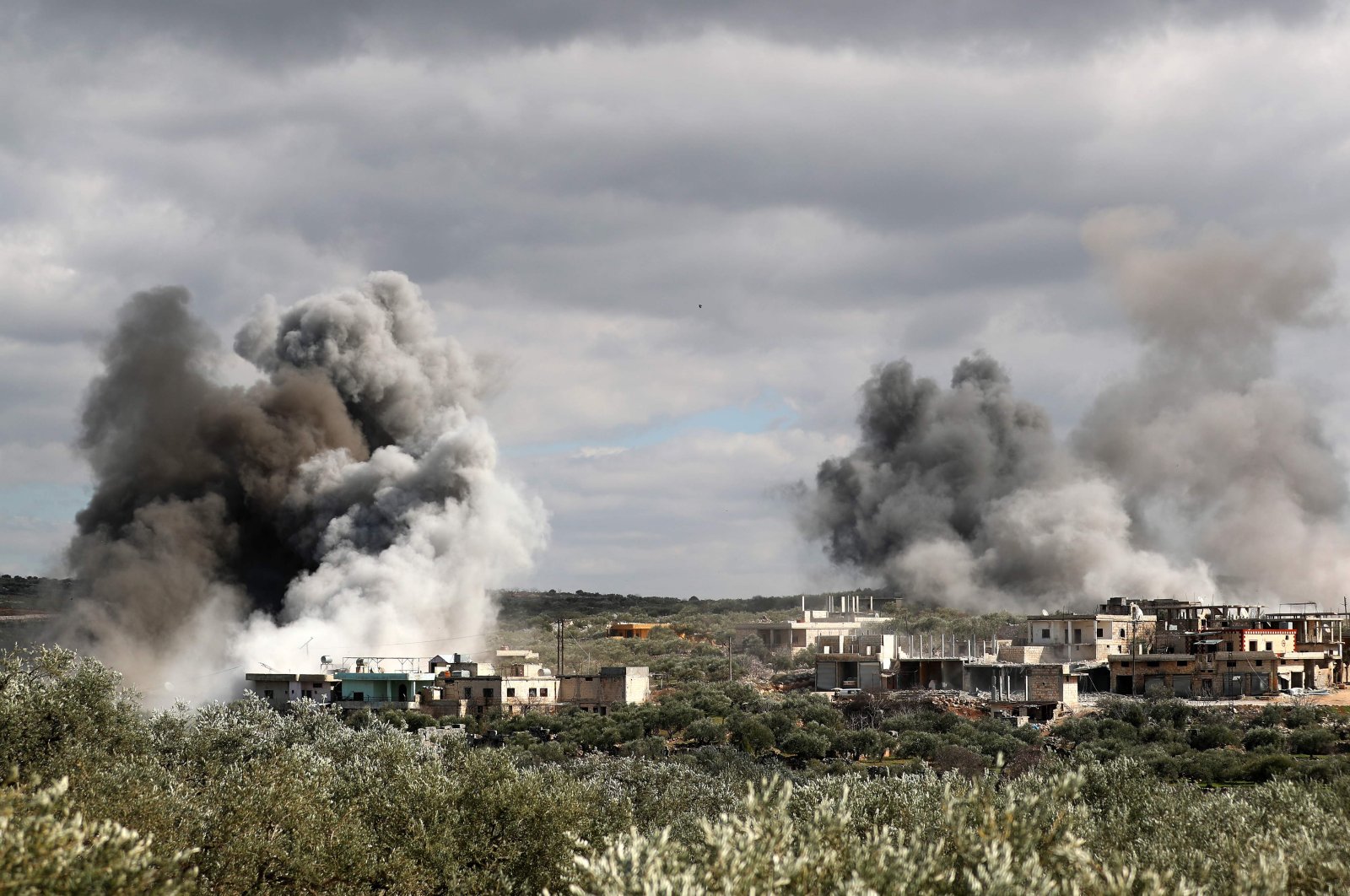 Smoke plumes rise after an aerial bombardment by Assad regime forces on the village of al-Bara in the southern part of the northwestern province of Idlib, March 2, 2020. (AFP Photo)
by Enes Güzel
Mar 06, 2020 12:05 am

Following the Syrian regime’s deadly attack on Turkish soldiers which killed 36 Turkish soldiers in Syria’s Idlib region, Turkey has called for an emergency NATO meeting to be held between the allies. Under NATO's Article 4 of the North Atlantic Treaty, when an ally thinks that territorial integrity, political independence or security is threatened, it can request a consultation with all allies.

Following the meeting, NATO Secretary-General Jens Stoltenberg expressed full solidarity and support with Turkey and the Presidential Communications Director Fahrettin Altun, said that Turkey's expectation from NATO is the establishment of a no-fly zone in northwest Syria. The attention then was turned to NATO members and whether there will be significant assistance to Turkish troops in Syria.

Since the outbreak of the Syrian conflict, NATO members, the United States, Germany and other countries deployed air-defense units to fellow NATO member Turkey in 2013 in response to shells fired from neighboring war-torn Syria which landed in the country. However, some member states, such as Germany, withdrew its Patriot missiles later in 2016, and as of now, Turkey is not adequately protected from potential cross-border attacks by Syria.

Since the start of the war in Syria, the NATO allies could not reach a consensus concerning Syria’s future.

In the Syrian conflict, the NATO countries act on their own and chase their narrow interests, therefore, contributing to the chaos in Syria. Turkey's Syria policy is also faced with this reality. In Syria, NATO allies say that they are allies on the battlefield but have conflicting goals.

Despite Turkey’s security concerns, some of the NATO allies still consider the YPG/PYD terrorist organization as their ally in the fight against Daesh, which makes the situation even more complex.

After the emergency meeting, Article 5 of the North Atlantic Treaty, which includes intervention for the protection of NATO member states, has been brought up again. Several member states rejected the case on the argument that the attack on Turkish troops did not take place on Turkish soil, and Article 5 only applies if the ally is attacked on its territory.

However, there are examples of NATO’s humanitarian intervention, such as Libya in 2011.

Although Libya is outside NATO's mandate, no attack or direct threat was originating from Libya against any NATO countries. However, NATO still decided to intervene in Libya to topple the Col. Muammar Gaddafi regime in the aim of protecting the civilians and preventing a humanitarian catastrophe in Libya.

The conflict in Syria should no longer be a matter of differences of opinion between the NATO members, and it should not be downplayed and reduced to whether Article 5 applies in Syria or not. As an energetic member of NATO, Turkey’s security is at risk and is threatened by Russia. The Syrian conflict is, in a sense, a test of whether an alliance system like NATO is expressing value today.

The increasing influence of Russia in Eastern Europe and the Middle East has been clearly visible in recent years. In addition to Russia's military interventions against Georgia in 2008 and Ukraine in 2014, the military and diplomatic role that Russia started to play especially in 2015 and onward in the Syrian conflict significantly increased its regional influence.

The U.S., the European Union and NATO could not play an effective role in the resolution of the Ukrainian crisis, nor could they influence Russia's policies too much through sanctions.

Moreover, the Donald Trump administration’s decision to withdraw U.S. forces from the Middle East has created a vacuum in the region. Russia is increasingly filling this vacuum in places such as Syria and Libya. Europeans have been merely watching the developments taking place for its neighbors despairingly.

As a staunch ally of the Syrian regime, Russia has offered air supremacy to Bashar Assad, which has given his regime the upper hand in the Syrian conflict. By using its advantage, the Syrian regime has constantly been shelling bombs on innocent civilians in Idlib at the cost of thousands of innocent lives. As a result, another refugee crisis was triggered, and a million civilians were pushed to the Turkish borders.

Consequently, Turkey as the only country that remains directly exposed to the negative consequences of the regime attacks in Idlib has launched the Operation Spring Shield against the Syrian regime to prevent the displacement of another million civilians and to ensure the safety and security of innocent civilians.

Test for the alliance

The situation in Syria today represents a test for the NATO alliance. If NATO support remains confined to words of support and does not materialize into action, it will harm the alliance. Such a situation will not only generate mistrust among its members and create a wedge within the alliance but also NATO will lose the power of deterrence, in particular, vis-a-vis the Russian threat. NATO’s appeasement policy toward Russia will further encourage Russia’s aggression, and Russia will be aware of the fact that whatever threat it poses to member states, it will not meet any considerable counteraction from NATO.

If Turkey cannot get sufficient support from its NATO allies, this will have a detrimental impact and undermine Turkish views of the NATO alliance. If the alliance leaves a member alone to take care of its problems, other members will learn from it and judge that the alliance is not looking after its members. NATO needs to assure its members that it is able and capable to meet with the security needs of its member states when they need it and should not put its credibility in danger.