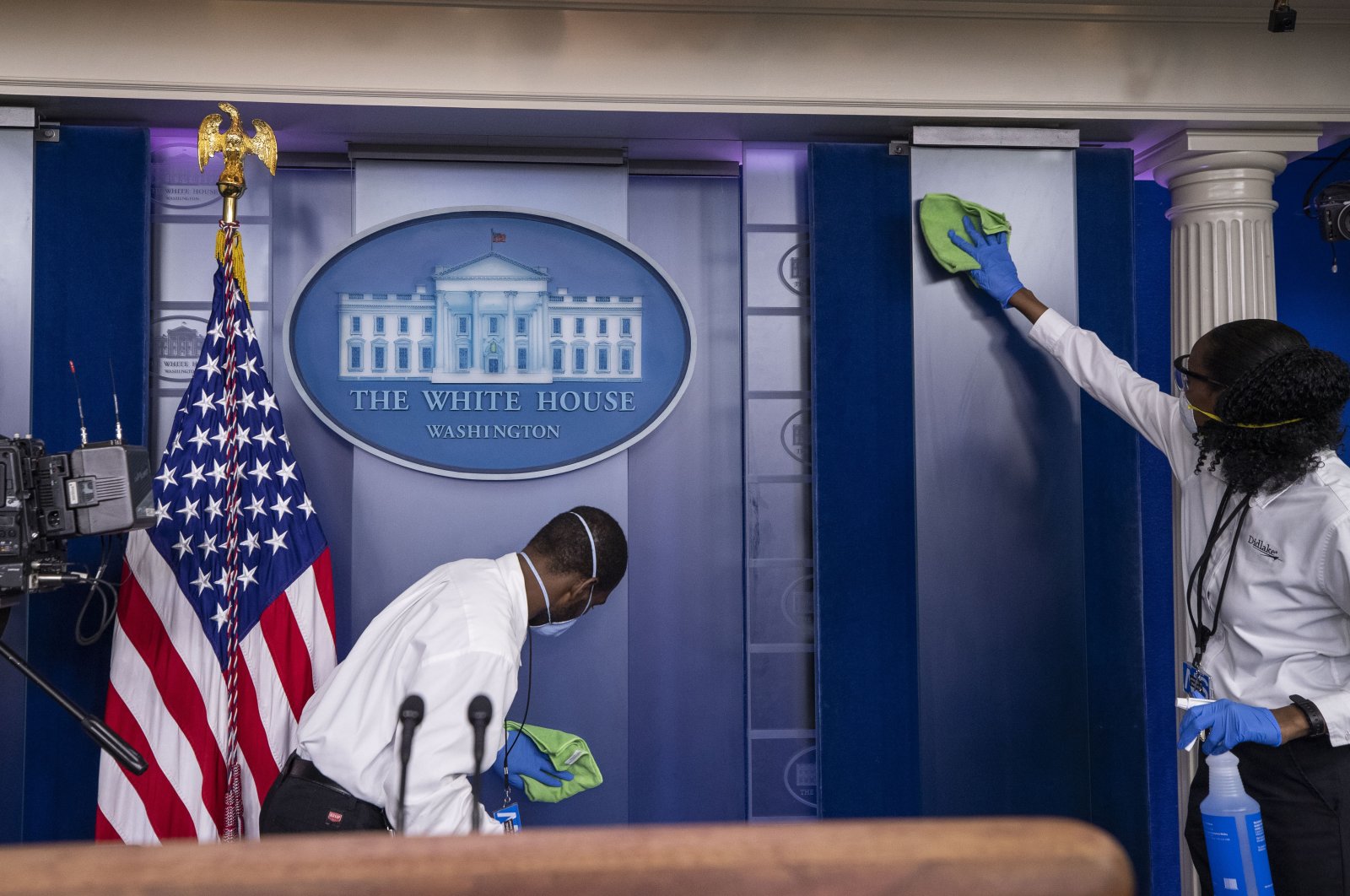 A cleaning crew wipes down surfaces before U.S. President Donald Trump speaks about the coronavirus in the James Brady Press Briefing Room at the White House, Washington, April 13, 2020. (AP Photo)
by Ali Çınar Apr 16, 2020 12:05 am
RECOMMENDED

The number of people who have lost their lives because of COVID-19 in the U.S., which is experiencing its most fatal month, will be reaching 30,000 soon. On average, 1,700 Americans have been losing their lives daily since last week.

Simultaneously, with the fight against the coronavirus, the American health care system has come under fire yet again. Many governors have complained that medical supplies are insufficient and have been demanding emergency aid for weeks.

Even U.S. President Donald Trump is making statements criticizing the system, which is not functioning properly, and the mistakes made during previous periods. The U.S. is suffering such a shortage of medical supplies that, by activating the Defense Production Act, passed in 1950, it has issued an order to private companies that they must produce necessary medical supplies.

So, has the U.S. health care system, which caused this, collapsed? The health care issue comes up at every presidential election. In fact, we see changes in health care policies every term, with different steps taken by every government.

When we look at it in general terms, we see many problems related to the health care system. The health care services are expensive and unjustly provided, there is a shortage of medical staff and supplies, and unwarranted profits are made by health insurance companies.

The total cost of hospital expenses in the U.S. is over $1 trillion. Both healthcare services and healthcare equipment are incredibly expensive.

When we look at the situation of the doctors, there are around 1 million doctors in the U.S. About 164,000 health care employees were not born in the U.S., and 17% of them are not U.S. citizens. According to the American Medical Association, the U.S. will have a shortage of 105,000 doctors by 2030. Recently, the U.S. Department of State’s Bureau of Consular Affairs issued a statement titled “Visa update for medical professionals,” which announced that the bureau would be urgently recruiting medical professionals from abroad.

The cost of treatment for an uninsured patient suffering from the coronavirus is over $30,000. If you do have insurance, the bill can be as high as $10,000, depending on the conditions of the treatment.

Last week, the Trump administration stated that COVID-19 patients who do not have insurance would be treated free of charge. Some of the insurance representatives in New York, with whom I spoke yesterday, stated that no such decision has been implemented yet.

In fact, we can give an example of the unjust health care system by looking at the ethnic groups infected by the coronavirus. For example, the share of African-Americans who lost their lives due to coronavirus in Louisiana is 70%. The number of African-Americans who have lost their lives in states such as Michigan, Wisconsin, North Carolina and South Carolina, is also high.

An interesting pattern can be observed in New York as well. According to the official sources of the New York state governor’s office, Latin American deaths make up 34% of the total, with African-Americans at 28% and Caucasian Americans, 27%. So why do we see more deaths among people of certain ethnic backgrounds? Poor living conditions, together with financial difficulties and not being able to access health care services equally. Many minorities, suffering from various chronic conditions, get infected by the coronavirus and die as they are unable to access health care services.

Among the population in general, there are 27 million people without insurance in the U.S. It should be noted that there is a significant segment of people who are running into debt or unable to access medical treatment as they have no insurance.

It is apparent that Turkey has a much better health care system. Even now, it is almost impossible to find masks in the U.S..

Two Turkish-American Doctors, I have spoken to in New York stated that the current situation is very bad and that their close friends had been infected by the virus. They also said that the health care system is not capable of handling the fight against the virus, and serious reforms were needed.

Unfortunately, we only learned of the need to invest more in health care, especially in America, as a result of this terrible coronavirus.

Our hope is that the leaders will make more serious and smart investments so that our future generations can be healthy.