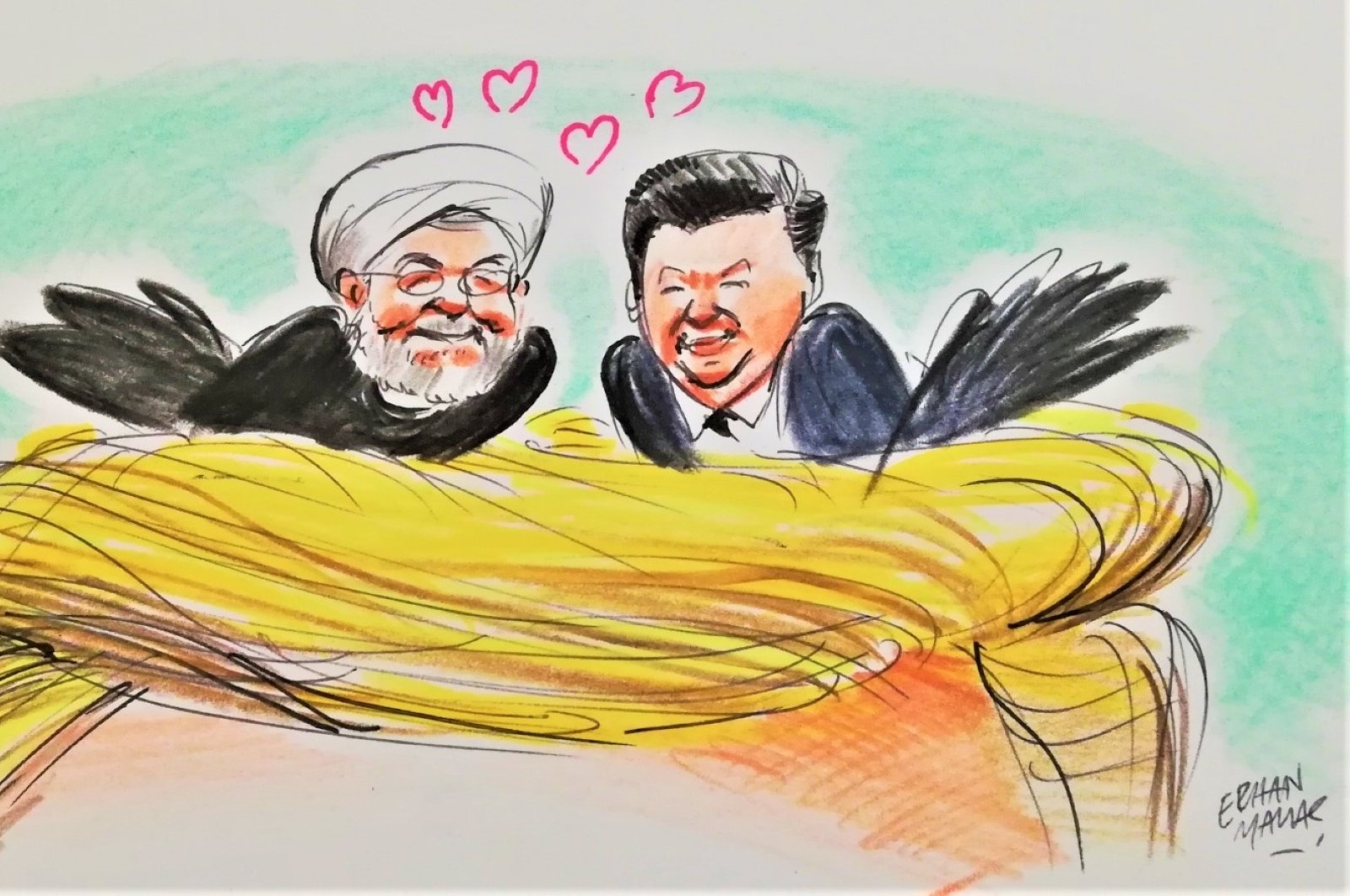 The growing cooperation between Beijing and Tehran directly targets U.S. interets and worsens both countries' ties with Washington

Iran has long exploited its rich energy reserves as leverage in its diplomatic relations with neighbors and countries further afield like China. For its own part, China sees investment in the energy sectors of its oil and gas suppliers as the best possible way to reduce its energy security risks. Oil, and more specifically its supply security, has a direct impact on China’s powerful economic growth, with any rupture in the flow considered a serious vulnerability.

A lot of concerns have been raised lately – by the public, people on social and mainstream media, as well as by politicians and experts – after Iran agreed on a 25-year comprehensive strategic cooperation deal with its largest trading partner, China.

The New York Times, in its report titled "China and Iran Approach Trade and Military Cooperation with Resistance to the United States," published part of the details of the agreement, emphasizing that this partnership will deal a major blow to Trump's aggressive anti-Iran policies.

Claiming to have a copy of a draft of the 18-page agreement, the Times wrote that Tehran and Beijing are planning broad economic and security cooperations that will pave the way for China's multibillion-dollar investment in Iran's energy and military sectors.

It continued to state that the "25-year Iran-China Comprehensive Cooperation Plan" document greatly expands Beijing's participation in Iran's banking, telecommunications, ports, railways and dozens of other projects. The report then went on to say that China would also receive a special oil discount from Iran for 25 years in return for participation in economic and military projects.

According to the document, joint training and exercises, joint research and development of weapons and information sharing between the two countries to combat the "relentless fight against terrorism, human and drug trafficking, and cross-border crime" will increase.

Critics claim that China will lead Iran into debt in a new form of colonialism that ignores their differences in aspects such as history, interest, geography, religion, ethnicity and culture. They say Iran is economically unstable and, as a recipient country, is taking great geopolitical risks by committing to China. Although the agreement has not been finalized yet, a comprehensive cooperation agreement with Beijing could be good news as Tehran tries to save its economy. Washington has no plans to end its sanctions and Iran will refuse to enter direct talks with the U.S. until its embargos are lifted.

Just as Tehran needs Beijing's investment and technology to boost its economy and minimize the impact of Washington's "maximum pressure" campaign, so too does China need Iran's oil, natural resources and market. In this environment, both sides are determined to build stronger partnerships and a logical geostrategic balance. Both will benefit economically and financially. In the long run, Iran can connect China to Europe through the Belt and Road Initiative. In contrast, Beijing can help develop oil and gas fields in Iran, which have the world's second-largest natural gas reserves and fifth-largest crude oil reserves.

Iran's relations with China have grown in the post-revolutionary years. Beijing has been one of Tehran's five major trading partners and during Mahmoud Ahmadinejad's presidency, the political and economic cooperation between the two states significantly increased, under the guise "Look to the East" program. During this period, Chinese companies participated in several industrial, energy and economic sectors projects in Iran. In the energy sector, in particular, numerous deals were signed between Iran's Ministry of Oil and public and private businesses in China.

However, many Chinese companies left Iran's energy industry due to the sanctions imposed by the Obama administration. Delays caused by their exit led some of Tehran's oil and gas projects to lose billions of dollars. Several of those same businesses signed joint ventures with Baghdad, which allowed Iraq to produce more oil than Iran. Thus, delays in operations and the increased production capacity of competitors caused Iran to lose much of its share in the regional and global energy markets.

Under President Barack Obama and his sanctions on Tehran's energy industry, Iran's petrochemical exports to China increased, enabling the country to offset some of its foreign exchange earnings, which had fallen sharply due to declining oil sales. Iran hopes to increase its petrochemical exports to China again and talks appear to have taken place during Foreign Affairs Minister Mohammad Javad Zarif's recent visit. The possibility of selling oil on the gray market to some Chinese customers is not far-fetched as it has a lower price than the global market.

The United States and China signed an agreement last January with the "first phase" designed to reduce trade tariffs between the two countries. "Together, we are correcting the mistakes of the past and shaping the future of economic justice and security for American workers, farmers and families," said Trump, who described it as a fundamental "transformation" in world trade.

According to Reuters, the agreement was signed after an 18-month trade war between the two countries, but some differences between the world's economic powers have not yet been resolved. In the report, Washington and Beijing believe that after months of negotiations, their "first stage" of the deal is a step forward but the U.S. government still says there is a large, unacceptable gap in the two countries' trade balance and that China should increase its imports from America.

Recently, tensions between the two countries have soared once again as China passed the Hong Kong security law. Trump has said the U.S. will react strongly. Last year saw some violent protests in the region, but the outbreak of the coronavirus reduced the clashes.

Under the first phase of the trade agreement, U.S. energy exports to China will reach about $18.5 billion this year and $33.9 billion in 2021. The trade war, the imposition of tariffs on Beijing and the economic pressure put on Tehran have not yet met Trump's wishes, and recent developments suggest that his two enemies may be working to find common ground.

The U.S. is likely to oppose this cooperation, but the important question is what options does America have to stop it. The Trump administration has used almost all its civilian angles to put pressure on Tehran, economic sanctions being the most important.

Given Iran's poor financial condition, it is natural that its 25-year cooperation document with China had little bargaining, and if it is implemented, the agreement will further serve Beijing's interests. The presence of the Chinese public and private companies in Iran could mean an increased Chinese presence and influence on Tehran's foreign policy.

Though, in special cases, China has pursued common national interests and has sided with the U.S. in its pursuit of sanctions of Iran's nuclear program, competition between Beijing and Washington will increase in the coming years, and China will be a top U.S. foreign policy priority, especially following the November presidential election.

The policy Washington adopts towards Beijing will have an impact on China-Iran relations, increasing Beijing's presence and influence in the Middle East. If there is more interdependence between Iran and China while there are tensions in Tehran-Washington relations, perhaps Iran could benefit more from this long-term cooperation if the 25-year strategic partnership is implemented. With support from the government for the Iran-China cooperation document, Iran needs to review its foreign policy if it wants to solve its problems caused by U.S. sanctions. Deescalating foreign policy will allow Tehran to take advantage of its favorable geographical location. Resolving tensions will allow Iran to interact with neighboring countries and major powers and improve its economy.

If the two countries' long-term strategic partnership is implemented, Iran can use the financial resources of Chinese companies to complete their semi-finished projects. The capital and technology of those businesses can be useful in increasing the production capacity of Iran's oil, gas and petrochemicals, but Tehran will not have an easy task ahead in its important role in China's energy security, and it seems likely that Beijing will benefit more from this cooperation.

Increasing the investment of Chinese companies, if operational, will increase Beijing's influence and presence in the Iranian region and foreign policy. We should not expect interdependence in the relations between the two countries. Moreover, Beijing's cooperation with Tehran has always been a function of China-U.S. relations. Accordingly, the continuation of tensions and rivalry between Washington and Beijing will also be influential for the future of Iran-China relations.