Is India sleepwalking toward a Muslim Holocaust? 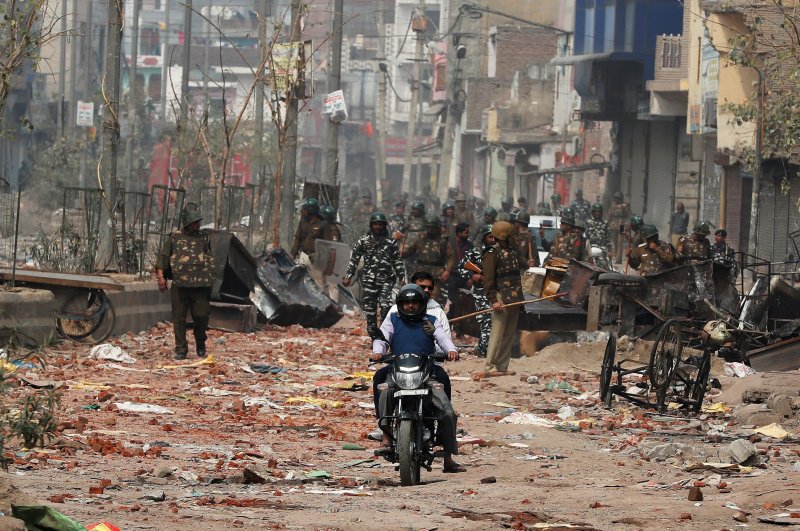 Men ride a motorcycle past security forces patrolling a street in a riot-affected area after clashes erupted over the new anti-Muslim citizenship law in New Delhi, India, Feb. 26, 2020. (REUTERS Photo)
by Irfan Raja Feb 28, 2020 12:05 am
RECOMMENDED

The holocaust – the last century’s tragedy that left unbearable losses and stains on the face of secular Europe – could happen again in secular India.

Shockingly, Indian Muslims are experiencing the same sets of denunciation as the Jews faced under the Nazi regime: exclusion from mainstream society, racial profiling based upon belief, negative media representation and bigotry.

Exactly identical to the representation of Jews in German films and press during the Nazi rule as the “bad guys,” the Bollywood films and sections of the Indian media portray Muslims as gangsters, dons, smugglers, terrorists and anti-state actors.

Hindu nationalist RSS terrorists are ideological equals of the Nazis. They back and endorse more horrific forms of torture including the imprisonment of Muslims in detention centers, police raids on Muslims mosques and at Jamia University, brutally beating young and elderly Muslims in public, intentionally demolishing their homes and lynching on the pretext of "holy cow protection."

What hypocrisy! At home, Hindu radical mobs kill any Muslim who eats beef, but the outside world sees India as the world’s largest exporter of beef, an activity that has dramatically increased under Prime Minister Narendra Modi’s government. This is the real face of a democratic India that is clearly anti-Muslim.

History seems to be repeating itself. As the Nazi Jews were seen as “disloyal” and “enemies within,” similarly, in today’s India, from Kashmir and Assam to Bengal, Indian Muslims have to prove their loyalty to Modi’s fascist government which considers them the “enemy within.”

Dr. Gregory Stanton believes “possible mass extermination of Muslims” is “definitely underway in India” as Modi had already committed a Muslim genocide in Gujrat.
So what can be done to stop the horrific repetition? This situation is petrifying as each day Indian Muslims are losing their hope to live as normal citizens.
Are they the new Jews?

Today, Muslims are living in concentration camps in Palestine, China, Myanmar and India.
Charles B. Anthony wrote: “Muslims are the new Jews. Perpetually vilified in the press, scapegoated by politicians and attacked in ever-increasing numbers on the street, Muslims are punished for their faith and culture, shackled to the jailer of prejudice drunk on his own self-righteous thirst for supremacy.”
Ordinary Europeans were persuaded that the Jews controlled money and businesses, conspired against their country of residence and plotted to kill European royals. The Nazis' frequent and skillful propaganda brainwashed ordinary Germans to such an extent that they believed that the Jews must be expelled or killed.
Currently, similar patterns and tactics are in practice, as the Bharatiya Janata Party (BJP) leadership backs a systemic campaign aimed at Indian Muslims that labels them as outsiders, incompatible, an enemy within and a threat to the RSS version of Indian society. Therefore, Muslims must be expelled according to their rhetoric.
Such a destructive campaign against the Indian Muslims has resulted in the rise of a racist slogan – “Go back to Pakistan” – which has been heard in films and from sports stars, namely, Nasseruddin Shah.
Hitler of our time?

Today, Modi has proved that he has much in common with Hitler such as Hitler’s concept of blood superiority (the Aryan nation) and racism centered on Jews. This prompted Imran Khan to say that Modi has Hitler’s mindset.
In a similar manner, BJP’s leaders are constantly suggesting they are Brahmins and Aryans, making them superior people in comparison with the Dalit Muslims of India.
So what next? A tragic and horrible past is turning into a reality in India. Seriously, we are at the threshold of a probable Indian Muslim’s Holocaust. So what shall be done to stop it?
BJP leader Rajeshwar Singh vowed to wipe out Indian Muslims and Christians by Dec. 31, 2021. Singh said, “We have decided that Islam and Christianity will be finished in India by 2021.” This is the "pledge” of the BJP, the political party with the most representation in the Indian parliament and state assemblies.
Already, the world is witnessing a growing tidal wave of bigotry and oppression against the Indian Muslims who are being forced to live as stateless.
To put it simply, a list of the Modi’s government illegal actions includes the Citizenship Amendment Bill, National Register for Citizens (NRC) and Citizens Amendment Act (CAA).

The British liberal press such as The Guardian have criticized Modi’s government over its draconian citizenship laws. These bills are evidently anti-Muslim which shows a plan for a grand-scale expulsion and a genocide of Indian Muslims.

Whether someone takes it or denies it, this is the writing on the wall. A Muslims holocaust will happen, if not now maybe later, as Modi’s seeds of hatred against Muslims have already rooted deep.

If Modi is genuinely patriotic to India, he should not forget what happened to ordinary Germans because of Hitler’s madness.

The challenge ahead is to deprecate ill designs of the fascist BJP, and this can only happen if all peace-loving Indians come together in this battle.
*British-Pakistani political analyst and human rights activist based in the U.K.