Is Sudan's crisis the result of power competition in Africa? 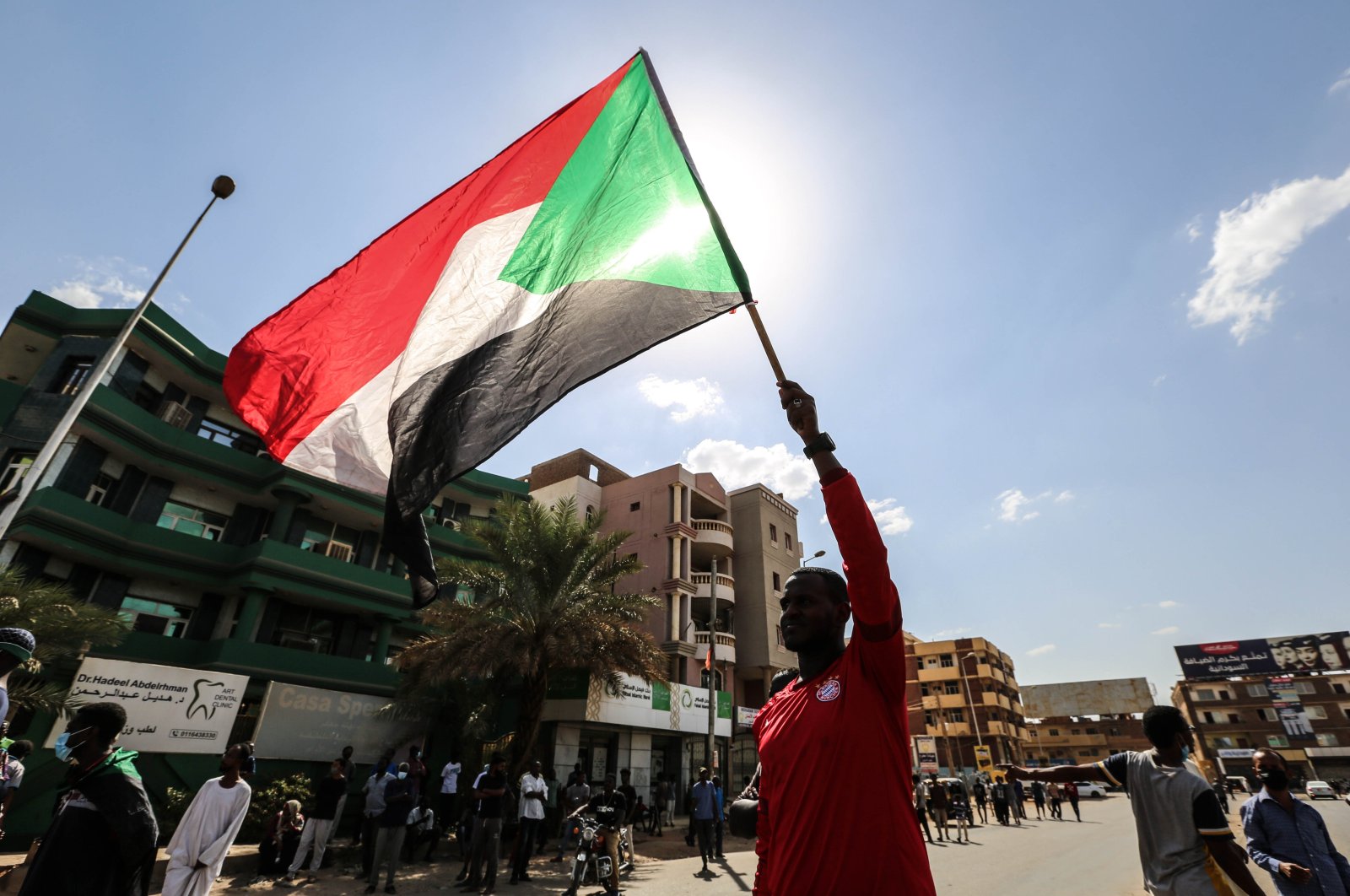 A Sudanese protestor waves a national flag as people gather in a rally against the military coup, in the capital Khartoum, Sudan, Oct. 30, 2021. (AA Photo)
by Ismail Numan Telci Nov 05, 2021 12:05 am
RECOMMENDED

Sudan’s political crisis has entered a new phase with the recent military intervention. The long-standing differences between the political and military powers regarding the post-revolutionary process resulted in a coup attempt in which civilian politics were once again restricted by military institutions. On Oct. 25, Sudan's top general, Abdel-Fattah al-Burhan, ordered the dismissal of the government and the termination of Prime Minister Abdalla Hamdok’s position as well as the detention of many high-level politicians. Al-Burhan announced in his statement that the administration would be handed over to civilians following a rather quick transition period.

While domestic factors have a major impact on the process, there are also a number of international dynamics regarding the developments in the African country. The developments in a country like Sudan, which is of critical importance not only in African but also global politics, cannot be explained without reference to the international dimension. In fact, Sudan has a key position in the rivalry between the United States and China, the tension between Egypt and Ethiopia, the rivalry between Turkey and the United Arab Emirates (UAE), and the struggle for influence between Britain and Russia. Therefore, U.S. support and the regional interactions of Sudan with countries like Egypt and Israel, who are among Washington's allies in the region, might have played a role in the recent military takeover.

In touch with actors

In this context, it is clear that military cadres in Sudan are in close contact with regional actors, particularly those attuned to U.S. foreign policy. While al-Burhan held meetings with the leaders of the UAE and Egypt, Gen. Mohamed Hamdan Dagalo’s visit to Israel in early October was critical. It was also reported on Nov. 1 that an Israeli delegation also paid a visit to Sudan in order to meet with Dagalo. When these dynamics are considered on an international scale, one could argue that the U.S. tried to convey positive messages to the military actors in Sudan, especially through its regional allies, and that it aims to prevent Khartoum from getting closer to Moscow and Beijing, both of whose influence is increasing in the country.

In fact, hours before the decision to seize control, the U.S. special envoy to the Horn of Africa, Jeffrey Feltman, arrived at Khartoum and had a meeting with al-Burhan. Although sources claim that Washington warned al-Burhan about a possible coup attempt, statements made by the State Department on the subject cause the veracity of this argument to be questioned. It is also claimed that the U.S. delegation was in a meeting with Sudanese officials just before the takeover, and this brings to mind that al-Burhan's decision was taken in coordination with Washington.

The main motivation for the U.S. in this regard was increasing concern about the rising influence of Russia and China in Sudan. Indeed, it was claimed that the U.S. was seriously disturbed by Moscow’s agreement with the military administration in Sudan, and offered large-scale financial and military aid to Khartoum in order to cancel that agreement. The agreement was giving Russia the opportunity to increase its military presence in Sudan and to establish a military base on the Red Sea, thereby arousing serious concerns for not only the U.S. but also other regional actors. However, it can be seen that these concerns are still in place – in a recent interview with a Russian news agency, Al Burhan stressed that the military leadership would approve the Russian naval base plans.

China as another factor

Another dimension of the U.S. involvement in the Sudanese process might be related to China. In this sense, it was of great importance for Washington to render Port Sudan dysfunctional, which was considered by China to be an important location on its Belt and Road Initiative, as one of the entry ports for Africa. Such a developed port in Sudan would also disturb regional actors such as Saudi Arabia and the UAE. Although the UAE has partnerships with China, it would not favor another strategic port in the region because of its potential to negatively affect the Jebel Ali Port in Dubai, an important transit point for trade from China to Africa.

It can be observed that Russia and China were seriously disturbed by the developments in Sudan. While they implicitly criticize the U.S., Bejing and Moscow also preferred to make statements that would not disturb Khartoum. In order to show their balanced position, Russia and China vetoed the draft resolution against the military coup in Sudan at the United Nations Security Council (UNSC) and ensured that the statement was written in more general terms. It is clear that both countries would not like to risk their political, military and economic investments in Sudan and the Red Sea region. Such actions are indications that the two countries will try to remain relevant in the fight for influence in Sudan.

A final actor to mention in this equation is Turkey. It is clear that a recent change had been observed in Sudan’s approach to Turkey. While the first indicator of change was the visit of Dagalo to Ankara in May, the positive relations between the two countries developed further with the arrival of al-Burhan to Turkey in August. One could argue that Sudanese authorities are likely to accept Turkey as a crucial actor. It is also likely that a constructive approach by Ankara toward the developments in Khartoum will be welcomed by political or military actors in the country.

This situation also hints that Turkey’s position in Sudan is somehow attuned to that of the U.S., the U.K. and Saudi Arabia. The careful language in Ankara's statements after the developments shows its willingness to cooperate with the U.S. in Sudan in particular, and in Africa in general. At this point, the Washington administration, which aims to balance China and Russia in the region, does not seem to have a rational option other than cooperating with Turkey, whose influence and power are increasing at the expense of France, whose influence is rapidly decreasing in Africa.