Is there a terrorism threat in the Balkans? 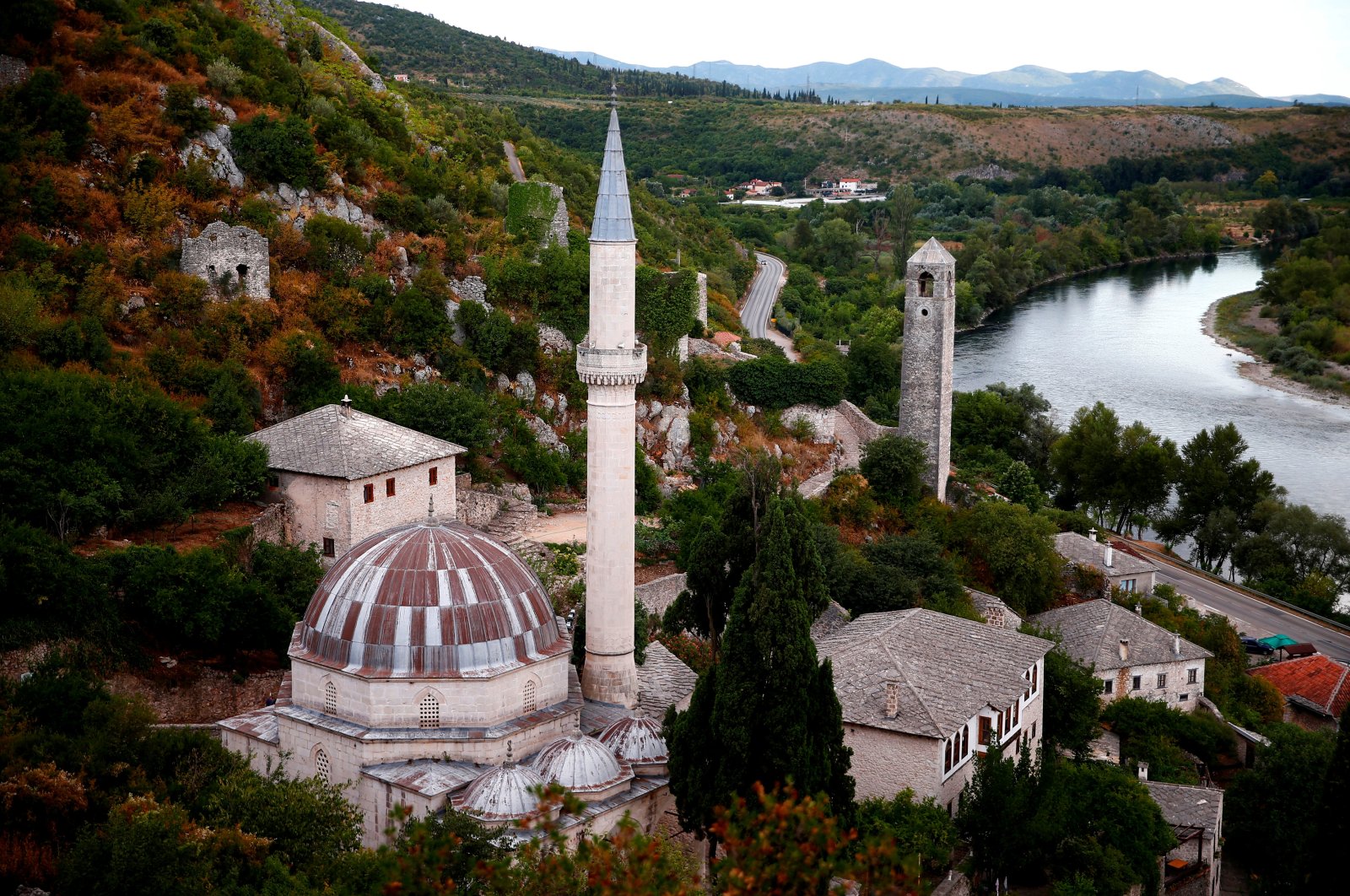 By attempting to link Bosniaks to terrorism, Serbian and Croatian nationalists want to fool the international community into believing that Bosnia-Herzegovina is a terrorist hub

In early August, Serb Republic Interior Minister Dragan Lukac said: “Each and every terrorist act committed in Bosnia and Herzegovina was carried out by Wahhabis. Almost all terrorist acts committed on European soil, but also those around the world, have some connection to Bosnia and Herzegovina.” His words were met with fierce criticism from many Bosnians, especially on social media.

What Lukac said is the latest in a series of controversial statements coming from various high-ranking Balkan politicians over the past year that aim to play on the worst fears of the international, particularly Western, public – terrorism. It is a salient feature of the ongoing demonization of Bosnia-Herzegovina’s Muslim population that many Western analysts have thus far failed to comprehend, or worse still, fell for.

Second, the country has seen dozens of young men join the ranks of Daesh. Many were killed in the Syrian and Iraqi battlegrounds, while those that survived were returned and faced hefty prison sentences. Finally, Bosnia-Herzegovina has suffered devastating terrorist attacks, with the last major attack carried out by a Serbian citizen against the U.S. Embassy in Sarajevo exactly a decade ago, not by a Bosnian. It resulted in no deaths.

So why would a high-ranking Bosnian Serb politician be depicting his own country as a terrorist hub?

Essentially, it all boils down to two reasons: demonizing Bosniak Muslims and switching the fact-based war narrative.

Here is how it plays out:

During the 1992-95 war, the negative image of Bosnian Serbs in the West was widespread. Serb-run concentration camps such as Omarska and Keraterm where Bosniak Muslims were tortured and killed were compared in Western media to the Nazi camps Bergen-Belsen and Auschwitz.

Bosnian Serb politician Biljana Plavsic, a former biology professor at the University of Sarajevo and a leading figure in Radovan Karadzic’s inner circle, was likened to Nazi doctor Joseph Mengele.

The destruction of Europe’s autochthonous Muslims prompted Holocaust survivors such as Elie Wiesel to plead to former U.S. President Bill Clinton to stop the killings. The image of Serbs as genocidaires lingered for years after the war.

These attacks had a ripple effect on the Balkans and came as a blessing in disguise to Serbian and Croatian nationalists. They realized it was a perfect opportunity to jump on the bandwagon of America’s "war on terror" and rid themselves of their genocidaire image. They began wisely utilizing America’s counterterrorism vocabulary and began telling the Western public what it wanted to hear – that they too had a problem with “Islamic extremists” and that the 1992-95 war was in fact a “counterterrorism” operation.

In fact, they went as far as to depict the deeply secularized Bosniak Muslims – for whom alcohol consumption was/is no taboo and whose mosque attendance boils down to a few times a year – as nothing less than “Islamic extremists.”

As Mersiha Gadzo stated in her article published in Al Jazeera, Milorad Dodik, a Bosnian Serb member of the country's tripartite presidency, has consistently claimed that Bosniak Muslim politicians want to create an Islamic state and that they are planning to give 150,000 Muslim migrants citizenship to change the country's religious makeup.

He also claimed that the Bosniak Party of Democratic Action (SDA) wants to set up an “Islamic state” and introduce “Islamic law” – even though the party has never gone further than supporting the introduction of religious education in primary schools.

Furthermore, a lobbying document from 2018 signed by Dodik and addressed to U.N. Secretary-General Antonio Guterres demonstrates how the Republika Srpska has been attempting to frame Bosnia-Herzegovina as a European "safe haven for terrorists" by claiming that "the SDA party's policies and actions during and since the 1990s war have turned BiH (Bosnia-Herzegovina) into a sanctuary for (terrorists)."

In a similar vein, Serbian Foreign Minister Ivica Dacic issued similar "warnings." During an interview last year, he said: "(Bosniaks) are waiting to pass 50% (in population) so they can create the first Islamic state in the middle of Europe," and then menacingly threatened, "We won't ever allow Bosnia to become an Islamic state."

During a visit to a small hamlet in eastern Bosnia-Herzegovina, Aleksandar Vulin, Serbia’s minister of defense and President Aleksandar Vucic’s right-hand man said, ‘‘The first Christian head fell right here ... so let the whole world see what the path of (terrorism) and path of hatred is.’’ He then added how this ‘‘path of (terrorism)’’ was later seen ‘‘on the beaches of Tunisia, on the streets of Paris and in New York.’’

As mind-boggling as it may be, Serbia’s defense minister was, in fact, linking Bosniak Muslims to al-Qaida and Daesh extremists who had carried out attacks in Tunisia, France and the United States.

Likewise, Croatian ethnonationalism is being directed against Bosniak Muslims by blaming them for the country’s failure as a state and depicting Bosnia-Herzegovina as a terrorist hotbed.

Speaking of the rising terrorist threat in Europe, Miroslav Tudjman, son of Croatia’s first President Franjo Tudjman, similarly said: “What is happening now in Europe is what happened in BiH in the 1990s. It was the beginning of today’s Islamic terrorism.’’

More famously, in 2019, Croatia’s then-President Kolinda Grabar-Kitarovic said of Bosnia-Herzegovina, "The country is now controlled by militant Islam, which is dominant in setting the agenda,’’ while in 2017 she claimed that the country was harboring "5,000 Salafists, who along with their supporters make up 10,000 people with very radical rhetoric and intentions." Both statements were dismissed as pure fabrications by Bosnian politicians and security experts. Questioning Bosnia-Herzegovina’s security and implying that Bosniak Muslims are the root cause of insecurity in the Western Balkans only deepens the narrative that there is a growing need to create a separate Croat entity in Bosnia-Herzegovina.

Creating such a nonexistent threat falls in line with Belgrade’s and Zagreb’s destabilizing foreign policies toward Bosnia-Herzegovina. With such a combustible mix of fake news, fabricated links with international armed groups and fallacious reports, Bosnia-Herzegovina is depicted as a present-day security risk, while Bosniak Muslims are projected as being tolerant toward, if not outright, “Muslim extremists.” Past military action against such "Muslim extremists" is thus shown as a legitimate endeavor, an acceptable option on par with how democratic Western states fight terrorism.

The problem occurs when such deliberate demonization of an entire nation is taken at face value by European journalists, politicians or academics whose repetition of these claims only plays into the hands of the nationalists who constructed them. This was seen in French President Emmanuel Macron’s Bosnia-Herzegovina being a “ticking time bomb” comment and in Austrian Prime Minister Sebastian Kurz and Czech President Milos Zeman claiming the country was a potential base for extremism.

In a similar vein, American professor Jessica Stern who authored the rather controversial book "My War Criminal: Personal Encounters with an Architect of Genocide" clearly fell for the Serbian nationalist narrative by arguing that there is “some truth to ... Karadzic’s claims that (Alija) Izetbegovic had cultivated (terrorists).”

Serbian and Croatian nationalists almost exclusively point to the wartime presence of a small band of rag-tag and undisciplined foreign Muslim fighters (the al-Mujahedeen unit) that fought alongside Bosnian government forces as infallible evidence of Bosnia-Herzegovina’s links with jihadism.

It is worth mentioning that these fighters entered Bosnia-Herzegovina through Croatia since Sarajevo was besieged; hence they could have only done so with the full acquiesce of Croatia’s intelligence services.

Numbering only a few hundred, the “mujahedeen” certainly cannot be blamed for radicalizing the remainder of Bosnia-Herzegovina’s eventually 200,000-strong army – which included many pro-Bosnian Serbs and Croats.

It is worth mentioning that Bosnia-Herzegovina went to great lengths to join Western clubs such as the EU and NATO. Not only did the country expel all foreign Muslim fighters after the war, but it violated its own laws and stripped naturalized former fighters and humanitarian workers of their Bosnian citizenship, leaving these Middle Easterners in legal limbo.

The Serbian and Croatian revisionist machinery is clearly adamant about changing the established fact-based narrative by playing into the fears of the West. By fabricating charges attempting to link Bosniaks to terrorism, they want to convince the international community that Bosnia-Herzegovina is not only a dysfunctional state but a terrorist hub too – and hence make their case for secession more plausible.

Such thinking results in a paradoxical situation where some of the highest-ranking Bosnian Serb and Bosnian Croat politicians accuse their own country of being a failed state prone to terrorism and openly call for its dissolution.

Serb and Croat nationalists, along with their backers in Belgrade and Zagreb, continue pushing the plot because they see it as an effective tool in pursuing their unfinished war against Bosnia-Herzegovina and its majority Muslim population by retroactively justifying crimes their forces committed. It is also a useful smokescreen to camouflage Serbia’s and Croatia’s irredentist aspirations toward Bosnia-Herzegovina’s territory.

For – if you can depict Bosnia-Herzegovina as being unstable, dysfunctional and on top of that an extremist safe haven – then you can surely garner Western support for its dissolution as the only viable solution.

And that is exactly what Serbian and Croatian nationalists, overtly or covertly, want.

* Broadcast journalist covering the Balkans, Turkey and the Middle East and a fellow at the Center for Advanced Studies in Sarajevo