Is Turkey progressing in its fight against the pandemic? 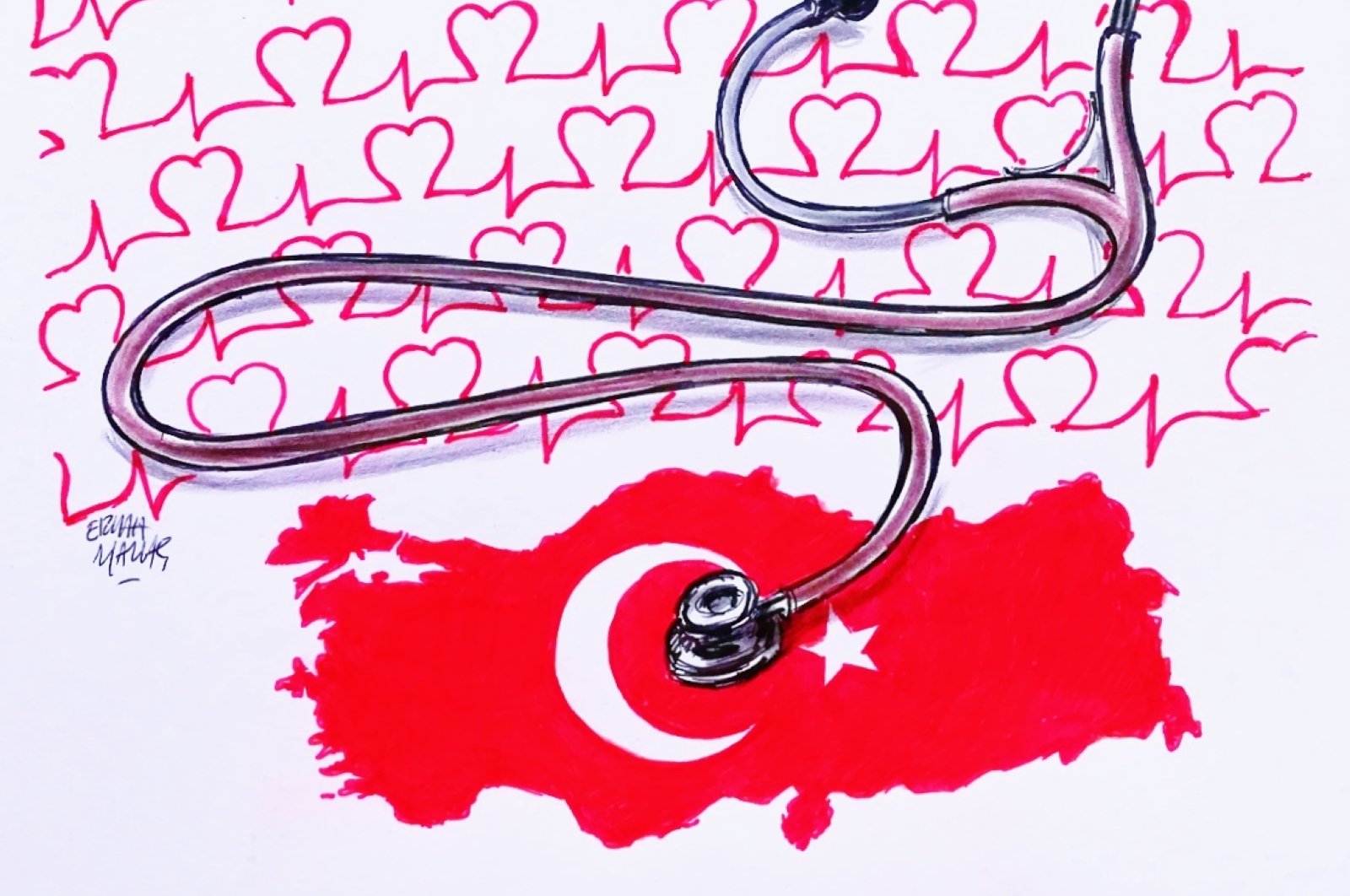 Both the public and state are working hard to stop the spread of coronavirus in Turkey, and this unity gives real hope for the future

Turkey is just one of many countries dealing with multiple regional and global issues. One of the latest problems is the COVID-19 outbreak. Soon after being brought up to the level of a pandemic by the World Health Organization (WHO), it brought the world to its knees.

Coronavirus was first discovered in Wuhan, China, in December 2019. There have been many narratives on how the virus began to spread. Some say the virus spread due to the handling and consumption of exotic animals, such as bats, snakes, and pangolins. Other groups claim that the virus was brought to Wuhan by American soldiers, who were there for the 2019 Military World Games. The real reason, however, is still unknown.

People who follow current events and listen to expert views will know that a vaccine may only be ready by the end of 2020, at the earliest. Until then, current preventative measures will have to continue.

Recently, there has been good news coming out of China as the number of new local cases decreases daily, while the number of imported cases increase. It is hoped that China will soon be sharing its detailed information with the rest of the world. In the meantime, China has sent medical aid in the form of masks and gloves, among other critical items, to Italy, Serbia and several countries in Asia and Africa.

Since March 11 – the day of the first confirmed infection in Turkey – COVID-19 has afflicted 7,000 people, caused more than 100 deaths, and seen over 10,000 people quarantined in 23 cities across Turkey.

Officials from the highest positions in society to the lowest have been trying their best to keep people indoors. I would like to point out two names for special mention: Erdal Terim, the Güneşli neighborhood headman, and Kerim Çakır, the Nakıpağa neighborhood headsman. These two men organized youngsters to help people in need, especially those 65 and above. They have them going door to door, providing a phone number in case they need something during their 24-hour curfew.

Besides, the youngsters help spread the word to the elderly that they are supposed to be staying at home. It should be noted, these names are only two out of thousands, all of whom are doing similar things. It is also worth mentioning that the gendarme and the police are on patrol too. Besides, town and village institutions are making frequent announcements to remind the elderly to not roam around, for their safety.

The Turkish people want to see that Turkey is capable of overcoming this pandemic as soon as possible. On the other hand, Turkish officials expect the public to collaborate with governmental orders and stay indoors during this time. In a sense, the public and the state must work together during this global-health problem – that is the most important way to halt the progression of COVID-19.

I would like to send my appreciation to everyone who has been working for each other during this dark time. My sincerest and most praiseworthy prayers go to our doctors, nurses and others who work inside and outside hospitals. I hope that officials use everything that is deemed necessary to help combat this virus. A good example, even family doctors are responsible for the tracking of coronavirus patients.

The government has medicine, which could very well be effective in fighting COVID-19. Doctors, nurses and other medical staff have been working selflessly and are focused on how to save people from this infectious virus, while other scientists and medical professionals are in a global race to find a vaccine or cure.

Currently, discussions are being held on how Turkey should proceed with further precautions. Some say that China should be taken as an example, while others are worried that Turkey could become like Italy. After a full lockdown in Wuhan, China has been able to curb the virus. Italy, on the other hand, has been undisciplined and unprofessional, so their cases have gotten worse.

Therefore, Turkey should act by observing both China and Italy.

I am not one to claim that Turkish authorities are hiding the "real" numbers of infected. My own suggestions come with a wholehearted belief in the remarks of Health Minister Fahrettin Koca. In my opinion, Turkish authorities should implement a full lockdown for 15 to 30 days, depending on the increase in the number of cases.

It should be noted that the increase could be very sharp due to the selfishness of people, who are not aware of how dangerous this virus would be for them and the people around them.

A full lockdown would help in many ways. Our medical staff would not become overwhelmed when the numbers of infections sharply increase, medical professionals would be able to detect the real number of patients, and a lockdown could very well prevent the health system from completely collapsing. In doing this, the controlled movement of 1 million to 5 million will be healthier and safer than 80 million's uncontrolled movement in Turkey.

From an economic perspective, my lockdown idea could allow for necessary industries to remain active. For example, of the 30 million workers in Turkey, only 1 million to 5 million are needed to maintain the primary industries and to keep economic engines active. Turkey could assist these workers with health-related needs and police escorts, while the rest of the country stays home.

The Turkish government has been trying to implement steps publicly, while there are other paradigms that we may not able to see or interpret. I still really believe that Turkey is capable of taking care of its citizens.

I would like to show my appreciation to our leaders, namely Recep Tayyip Erdoğan, Fahrettin Koca, Süleyman Soylu, Ziya Selçuk, Hulusi Akar and other ministers. There has been quick and efficient cooperation between these ministries, with Koca being showered with extra appreciation from Turkish people from all walks of life.

The police have been conducting raids on the manufacturers of health equipment that engage in the price manipulation of their products, such as masks. Authorities have even stationed themselves at the facilities owned by the manufacturers so that they do not price gauge again. The leaders of these manufacturing companies were warned that those who do not cooperate with the state may face expropriation, which will prevent opportunistic manufacturers from manipulating prices. Turkey has always encouraged domestic production with countless incentives. Now, in what can only be described as one of the darkest days of humanity, it is time for our domestic manufacturers in all industries to work with the state.

The scale of this worldwide outbreak and its impact on the political, economic, social and psychological spheres will be enormous. Turkey is gradually announcing its own precautions, which includes economic and social packages for the nation. Several days ago, President Erdoğan announced a tremendous relief plan for the country, worth TL 100 billion.

Additionally, each ministry has been announcing updated plans and policies to mitigate the effects of the pandemic. For instance, the Ministry of Family, Labor and Social Services will provide about TL 1,000 to 2 million people who are temporarily out of work. To the public, however, this package seems to be geared more towards business people. Therefore, Turkish officials may consider acting quickly on relieving common folk as well.

In fact, even in this era of technology, many other activities can be done at home. Some of these activities include reading a book, spending more time with family members, resting the mind, using technology to meet people and share experiences and so on. Technology does not limit us; it opens doors to others. Thus, we should explore technology in a meaningful way and reach out to the world while we stay at home. It is also important to note that social distancing is a lifesaver not only for individuals but for everyone else as well.

There are a few very simple rules that should be followed. These include washing hands frequently with soap, minimizing outdoor activities and following the instructions of medical professionals.

As a Turkish citizen, I kindly asked Sabri Özen, a businessman and a member of the Occupational Safety Businessmen Association of Turkey (TIGIAD), if it is possible for them to donate any health equipment, such as masks and gloves, to hospitals. Özen contacted TIGIAD and received a positive response for donations, which have already been made. I appreciate everything they have done and I hope this is a good example for those who can donate whatever they have.

I would like to say that Turkey can take care of its citizens and after coronavirus, Turkish people will be very appreciative of the state. For example, if there is a full lockdown, I am eager to donate my one-time allowance to my country once COVID-19 has been defeated, even though it is not needed.