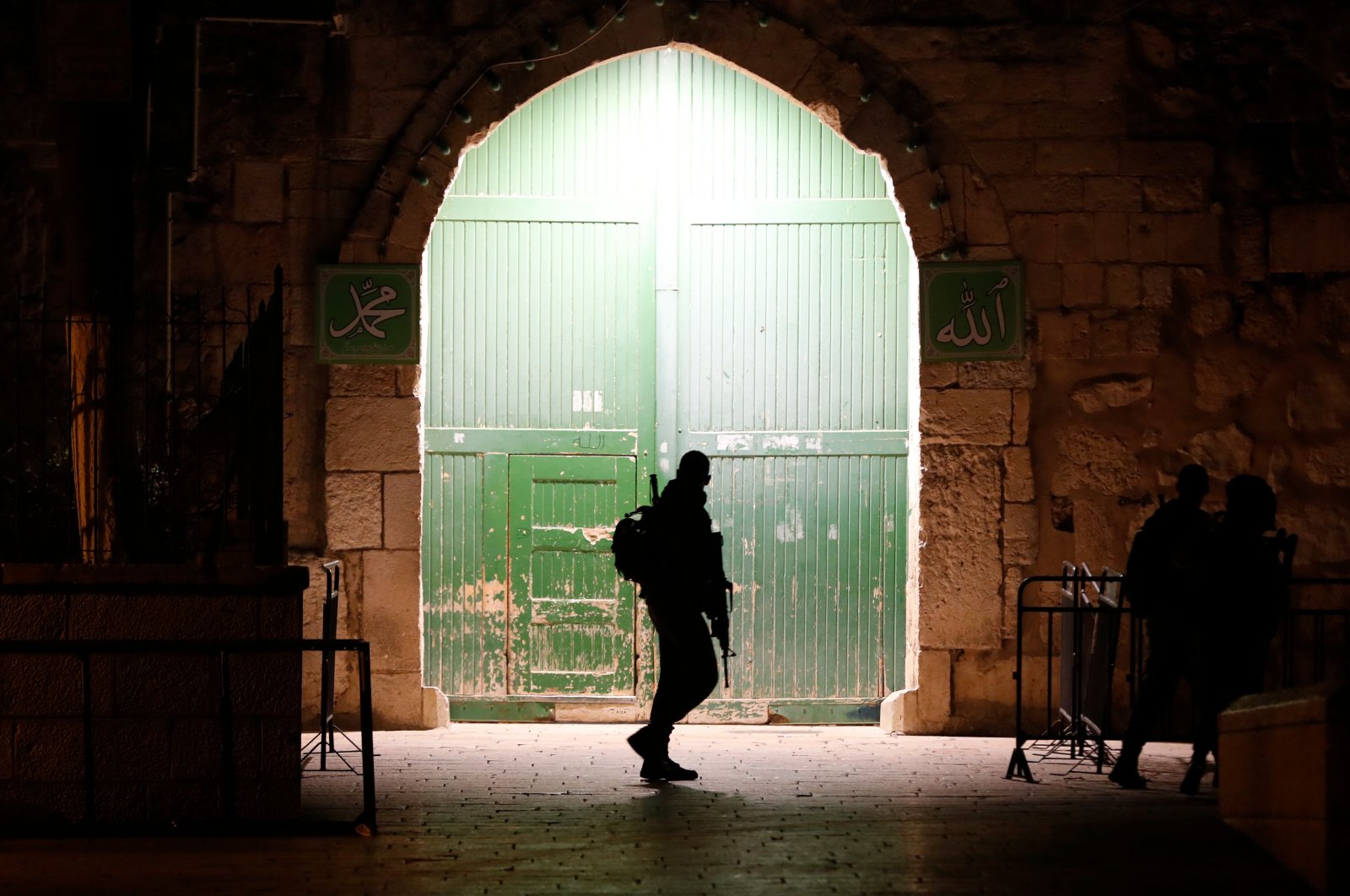 In its continuous attacks on Palestinian identity and cultural presence in east Jerusalem, Israeli occupation forces on July 22 raided the Yabous Cultural Center and Edward Said National Conservatory of Music (ESNCM) in Jerusalem and confiscated documents and equipment after detaining the centers’ directors from their homes.

Separately, Israeli police raided the home of the director of the Jerusalem Arts Network – Shafaq, an umbrella network which includes the Yabous, the Conservatory, the Palestinian National Theatre (al-Hakawati), the al-Ma’mal Foundation for Contemporary Art and the gallery of The Palestinian Art Court (al-Hosh).

The Yabous Cultural Center was founded in 1995 and hosts theatrical performances, musical events, art exhibitions and film screenings throughout the year. The ESNCM was originally founded in 1990 and was renamed in 2004 after the Palestinian historian and writer Edward Said.

Based at Birzeit University, the ESNCM primarily offers musical courses to more than 1,000 students. It has branches across Palestine, from Jerusalem to Bethlehem, Ramallah, Nablus and Gaza.

Dr. Hanan Ashrawi, member of the PLO’s Executive Committee, condemned Israel’s arrest of cultural figures in east Jerusalem, saying: “The raid by Israeli forces of various Palestinian cultural centers in occupied Jerusalem is the latest of a long history of targeting everything Palestinian in our occupied capital.”

The detainments and investigations into these prominent Palestinian cultural organizations come amid increasing pressure on Palestinian communities in Jerusalem, occupied by Israel since 1967. In recent weeks, Israeli officials arrested the governor of Jerusalem, Adnan Ghaith, and Jerusalem minister, Fadi al-Hidmi, both on terrorism-related allegations.

In November 2019, many Palestinian schools in Jerusalem were shut down because they received funding from the Palestinian Authority in Ramallah.

The increased targeting of Palestinian civil society and its public role in Jerusalem correlates with the United States’ support, under the Donald Trump administration, of Israel’s claims to the entire city and Israeli Prime Minister Benjamin Netanyahu’s announcement of pending plans to annex large portions of the West Bank.

The Six-Day War in 1967, which resulted in the occupation of east Jerusalem and the Palestinian territories by Israel, ended the armistice demarcation line between the eastern and western sectors but reopened the debate over the two competing claims with new vehemence. Israel, which annexed east Jerusalem in 1980, considers Jerusalem as the "whole and united ... capital of Israel," and wants the city to "remain forever under Israel's sovereignty." Hence, its application for de facto control on the ground has enabled it to invest vast resources and efforts into changing the physical and demographic characteristics of the city.

The Israeli claim to Jerusalem, however, has not been recognized by the international community which rejects the acquisition of territory by war and considers any changes on the ground illegal and invalid. On the other hand, the Palestinians have claimed east Jerusalem as the capital of a future independent State of Palestine to be established in the territories occupied since 1967.

Over the centuries, several institutions have been created in Jerusalem, but after Israel’s occupation of Jerusalem in 1967, many of them were forced to close immediately. Only weeks after the occupation, Israel unilaterally expanded the municipal borders of Jerusalem from 6.5 square kilometers (2.5 square miles) to 72 square kilometers, enlarging east Jerusalem by more than 10 times. Israel then applied its own laws, administration and jurisdiction over the newly expanded area of municipal Jerusalem. Since that time, Israel has imposed a number of policies and practices aimed at Judaizing the city and annexing it to make the unified Jerusalem the eternal capital of Israel.

These actions are contrary to international law, which states clearly that all policies adopted by Israel, the occupying power, to alter the status quo of the city are illegal, causing irreparable damage to the historical identity of Jerusalem as an Arab-Palestinian city, home to the three major monotheistic faiths.

During the Oslo negotiation – peace talks held between Israel and PLO in the 1990s – the PLO requested a written commitment from the Israeli side regarding the specific status of the Jerusalem institutions. On Oct. 11, 1993, Israeli Foreign Minister Shimon Peres sent a letter of assurances on the issue of Palestinian institutions in occupied east Jerusalem to Minister Johan Jorgen Holst of Norway, after making a statement to the same effect in the Knesset on Sept. 9, 1993. The letter stated:

Furthermore, Article XXXI (5) of the Interim Agreement (Oslo Agreement) makes it clear that the question of Jerusalem is one of the remaining questions reserved for the negotiations on permanent status.

Besides, Article XXXI (6) provides that the legal position on Jerusalem has in no way been affected: “Nothing in this Agreement shall prejudice or preempt the outcome of the negotiations on permanent status to be conducted pursuant to the Declaration of Principles (DOP). Neither Party shall be deemed, by virtue of having entered into this Agreement, to have renounced or waived any of its existing rights, claims or positions."

On Dec. 21, 2017, the United Nations General Assembly (UNGA) approved by an overwhelming majority of 128-to-9, with 21 absentees and 35 abstentions, declared the status of Jerusalem as Israel's capital as "null and void," resolution ES‑10/L. 22 of the UNGA. In its preamble, the resolution states that "bearing in mind the specific status of the Holy City of Jerusalem and, in particular, the need for the protection and preservation of the unique spiritual, religious and cultural dimensions of the city, as foreseen in relevant United Nations resolutions. Stressing that Jerusalem is a final status issue to be resolved through negotiations in line with relevant United Nations resolutions, and expressing, in this regard, its deep regret at recent US decisions concerning the status of Jerusalem."

About 88 organizations were closed down completely, while the others had to transfer their operations from occupied east Jerusalem to other areas in the West Bank, mainly Ramallah, after the creation of the Palestinian interim government.

The most prominent institution that has been closed by Israeli authorities was the Orient House in August 2001, the de facto headquarters of the PLO in east Jerusalem. The institution was the focal point of Palestinian cultural and political life, followed by the closure of more than 22 economic and social institutions.

The closure of the Orient House and Chamber of Commerce in the early 2000s has created a vacuum in the Palestinian national and social fabric and subsequently had a significant impact on Palestinians in Jerusalem.

The Orient House played a significant role and became the leading Palestinian political institution in Jerusalem as the late Faisal al-Husseini and many others worked constantly to support Jerusalemites and strengthen their steadfastness in the city.

On the other hand, the Israeli government did not even spare the education system in Jerusalem. Palestinian narrative, history and culture have been erased from the curriculum taught in schools administrated by the Israeli Jerusalem Municipality.

Furthermore, it disfigures historical facts including claims of Jerusalem as the capital of Israel, additionally, it mainstreams and normalizes Israeli symbols into Palestinian daily life including the flag and national anthem.

Palestinian nongovernmental organizations working in Jerusalem on Palestinian youth educational artistic training are continuously targeted through the closure of the organizations, shutdown of events, and detainment and imprisonment of employees.

The Israeli government policy of targeting Palestinians and their cultural and educational institutions are expected to become more aggressive with the introduction of the so-called “Deal of the Century” and the backing of Trump administration.

This deal not only facilitates the continuous denial of the Palestinian right to self-determination but also presents economic prosperity as a viable alternative to addressing final status issues, including the status of Jerusalem which Palestinians consider their future capital.

Urgent action by the international community must be taken to suppress Israel’s violations of international humanitarian law with regard to all aspects of Palestinians’ daily life and future in occupied east Jerusalem.

* Palestinian author, researcher, freelance journalist and recipient of two prizes from the Palestinian Union of Writers