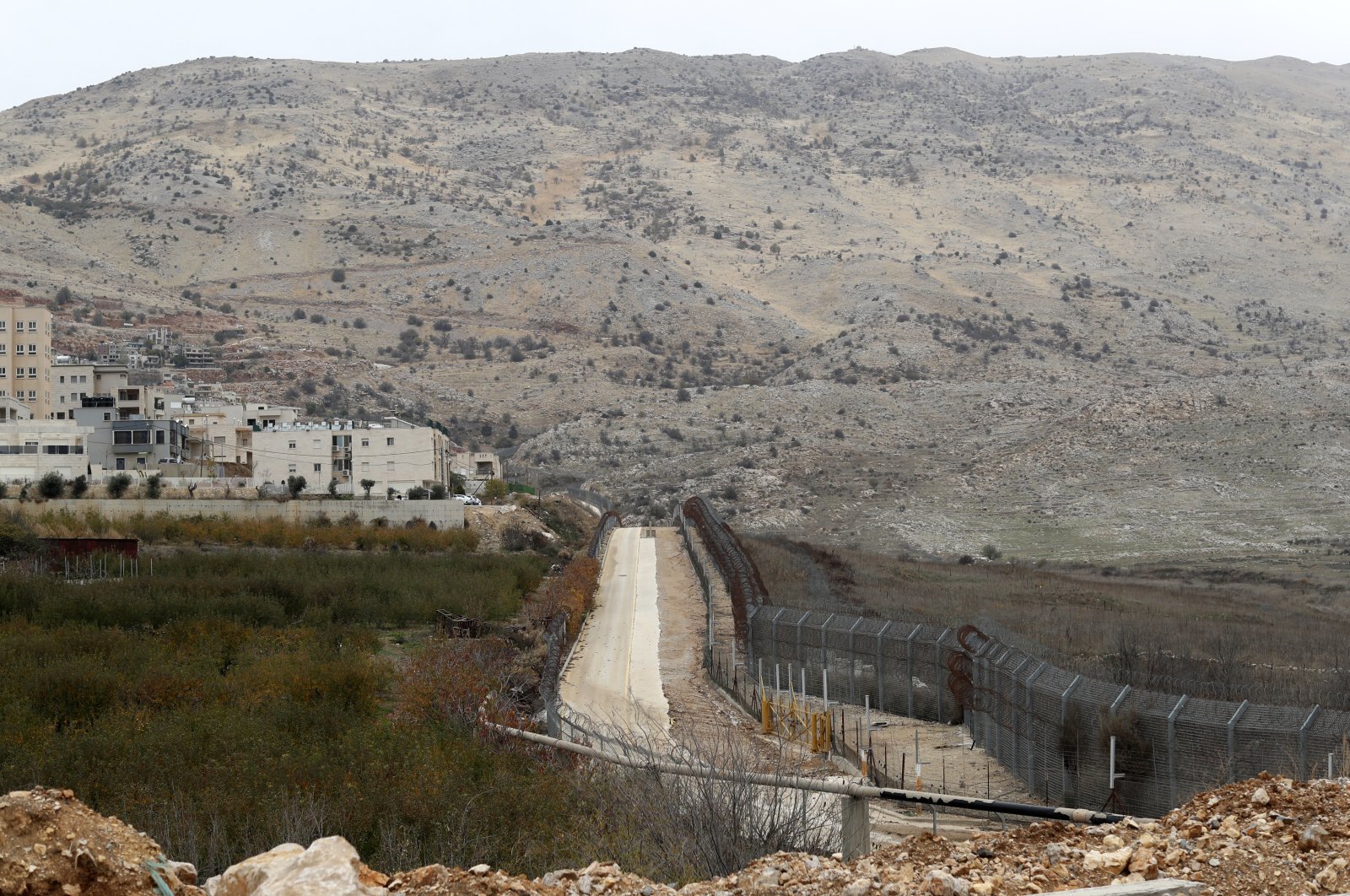 A general view of the Israel security fence with Syria next to the the village of Majdal Shams, in the Israeli-annexed Golan Heights, Dec. 10, 2021. (EPA Photo)
by Najla M. Shahwan Dec 28, 2021 12:05 am
RECOMMENDED

“Settling the Golan Heights is a top priority for Zionism. I urge Israelis who are sick of fighting traffic to live well and do good for the country and come to the Golan.” These are the words Israeli Prime Minister Naftali Bennett wrote in an article published in Israel Hayom recently, promising to follow the steps of Menachem Begin, whose government applied Israeli sovereignty to the Golan Heights in December 1981.

Bennett, in his article, declared that he plans to strengthen the Golan Heights and help it grow through a "billion-shekel ($318 million) plan (that) the Israeli government will approve."

"We are shining a spotlight on the Golan and saying clearly, we are with the Golan, and we are on the Golan.”

“The Golan Heights are more than a strategic asset of importance to diplomacy and defense. It's also a home, it shapes the landscape of our homeland.” He continued saying the decision the government is likely to make will be an important declaration that “The Golan Heights is no longer disputed ... the Golan is ours, it is a matter of national importance, and a top priority for Zionism.”

The Golan Heights was Syrian territory until 1967, when Israel seized it from Syria in the closing stages of the Six-Day War. Most of the Syrian Arab inhabitants fled the area during the conflict.

An armistice line was established and the region came under Israeli military control and almost immediately Israel began to settle the Golan.

Syria tried to retake the Golan Heights during the 1973 Middle East war and despite inflicting heavy losses on Israeli forces, the surprise assault was thwarted. Both countries signed an armistice in 1974 and a United Nations observer force has been in place on the cease-fire line since 1974.

There are more than 30 Jewish settlements on the heights, around 20,000 settlers. There are some 20,000 Syrians in the area, most of them members of the Druze sect.

The Golan is a hilly, 1,200-square-kilometer (460-square-mile) plateau overlooking Lebanon, Syria and the Jordan Valley. It is only 60 kilometers (40 miles) from Damascus and provides Israel with a strong defensive-offensive position and vantage point to observe military movements across the border. On the other hand, Syrian control over the Golan would provide it with strategic heights overlooking Israel.

Besides the security dimension, another key issue is the water resources in an arid region. The Golan catchment area feeds into the Jordan River and Sea of Galilee, both major sources of water for Israel.

The fertile land is used for agriculture, growing vineyards and orchards. It is also home to the only ski resort in Israel.

U.N. Security Council Resolutions 242 and 497, both supported by the U.S., provide the legal basis stating that Israel's unilateral annexation of Syrian territory violates the international law.

The Syrian civil war has severely weakened the authority of the state, allowing Israel to exert its claims over the Golan.

Deploying new tactics to hold on to the territory, the Israeli government’s plan to double the population of the Golan Heights and that of the unofficial capital of the region Katzrin. Besides it will upgrade the existing infrastructure of new settlements, neighborhoods and the creation of around 2,000 jobs in an effort to transform the Golan into Israel's renewable energy capital.

The Israeli government plans to invest 1 billion shekels (around $318 million) in the area, a joint effort of the Housing and Construction, Interior, Transportation, Tourism, Economy, Agriculture, Education and Environmental Protection Ministries, as well as the Israel Land Authority.

The plan is expected to increase the population by 23,000 residents in the Golan region.

On the other hand, the Israeli government intends to establish two new settlements in the Golan, Assif and Matar, each of which will include some 2,000 housing units and improve transportation infrastructure connecting the region to the rest of Israel, as well as interconnecting the Golan's various communities and Katzrin.

The Israeli government is further expected to upgrade the emergency medical services and expand front-line medical call center activity in Katzrin. It also seeks to develop cybersecurity leadership in the region, as well as invest significantly in formal and informal education. In addition, it will build tourism infrastructure, provide grants to entrepreneurs in the hotel industry and support the marketing of new hotel complexes.

Likewise, the government intends to raise hundreds of millions of shekels in the private sector toward solar energy projects, including the creation of energy storage systems.

On his part Israeli Justice Minister Gideon Sa'ar commented on the plan saying, "the future of the Golan will be determined with actions and not words. We have an opportunity to determine for generations the Golan's future as an inseparable part of the state of Israel. The settlement of the Golan is Zionism and quality of life intertwined. We are determining a realistic goal: Doubling the population in the Golan.”

Addressing a conference about Golan's future in October, Bennett said that despite many in the world now acclimating to the notion of the territory belonging to Israel, "even in a situation in which – as could happen – the world changes tack on Syria, or in relation to Assad, this has no bearing on the Golan Heights. The Golan Heights is Israeli, full stop," he told the forum.

U.S. President Joe Biden's administration, on the other hand, while not changing the policy, has been increasingly circumspect on the Golan issue, describing Israel's hold as de facto rather than in de jure terms.

In February, when asked in an interview if Washington would continue to deem the Golan Heights as part of Israel, Secretary of State Anthony Blinken signaled openness to an eventual policy review on the territory.

"As long as Assad is in power in Syria, as long as Iran is present in Syria, militia groups backed by Iran ... the control of the Golan in that situation, I think, remains of real importance to Israel's security," he told CNN.

"Legal questions are something else. And, over time, if the situation were to change in Syria, that's something we'd look at."

Israel’s colonial project in the occupied Golan Heights is developing dramatically and by its new plan it is trying to tighten its grip on the territory regardless of international law violations, while the international community watches silently and the U.S. shows the green light.