Kashmir: A chain of broken promises 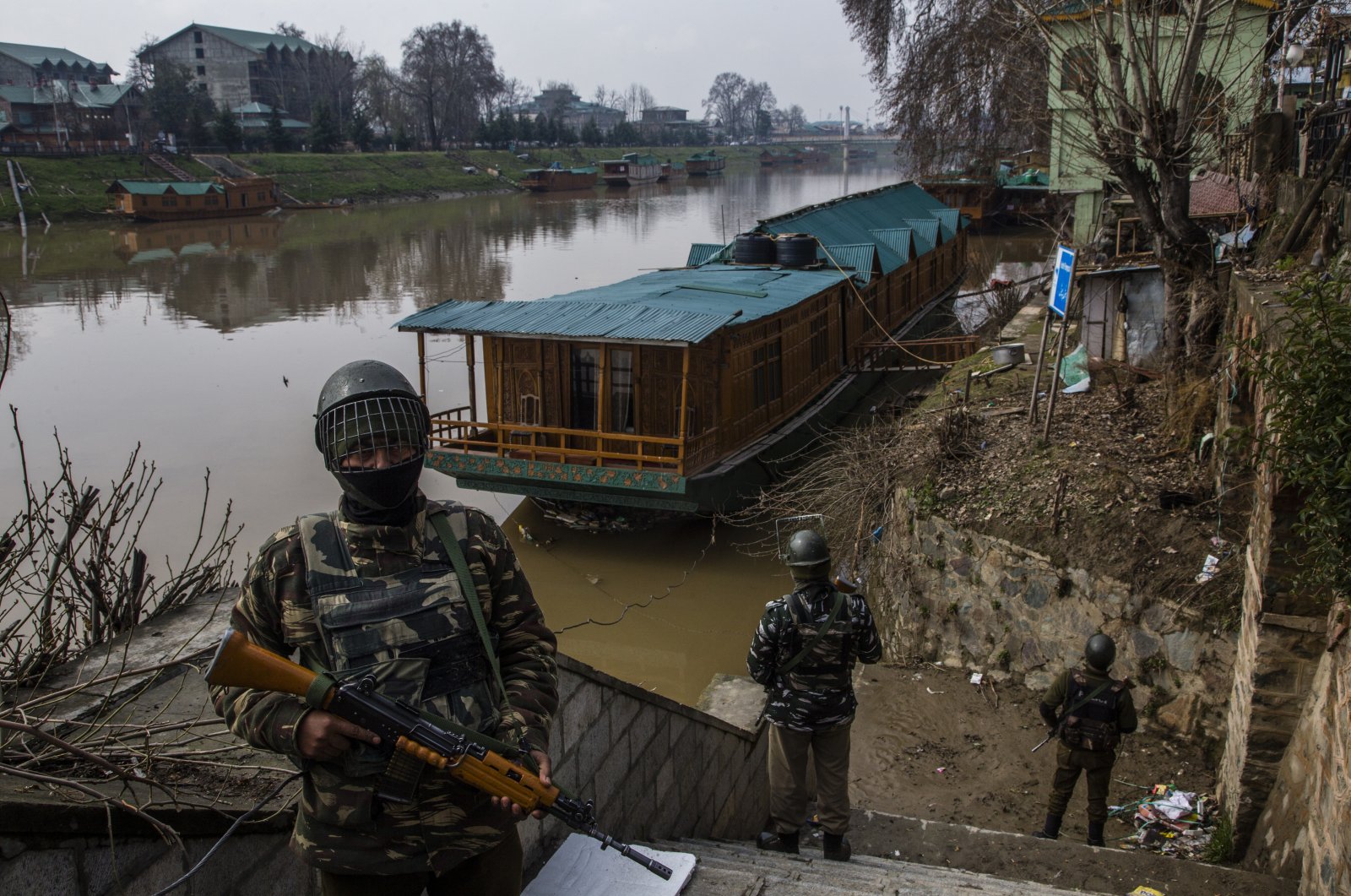 If promises are made to be broken, then Kashmir may be summoned to prove the treacherous proposition. Broken promises haunt Kashmir's history and explain its tragedy. I will confine myself to the last century as a concession to the shortness of life.

Under the 1846 Treaty of Amritsar, Great Britain sold Kashmir and its then 2 million people to a Sikh ruler, Gulab Singh, like sheep and cattle. The strutting British Empire valued Kashmiris every bit as much as it did the Irish then undergoing the Great Famine also known as the Irish Potato Famine, which many in New York condemn as a British genocide. But that was of little solace to their South Asian counterparts.

Kashmir was a princely state under Gulab Singh and his successors, Ranbir Singh, Partap Singh and Hari Singh. A princely state was not directly ruled by the British Raj like India but was subject only to British dictation over matters of defense and foreign policy.

Maharaja Hari Singh, a Hindu, began his princely rule over Kashmir in 1925. The people of the land were predominantly Muslim but lived a warm coexistence with Hindus, Buddhists and Sikhs. Their understanding of Islam had taught them mutual respect, harmony and ecumenism.

The maharaja inherited a regime earmarked by brutal repression of Muslims. Heavy taxation, discriminatory laws, forced labor, and the absence of representation in services and the lack of educational facilities were chief grievances. The slaughtering of a cow was a capital crime, and mosques were controlled by the state.

All dissent or political protest was brutally suppressed. For instance, the maharaja summarily drowned state silk factory workers in 1924 for the audacity of demanding higher wages than the likes of Oliver Twist.

Muslims who petitioned British Viceroy Lord Reading to correct or ameliorate their grievances during his 1924 visit were sent into exile and their properties confiscated. The British then appointed a commission headed by B.J. Clancy to investigate the grievances. It confirmed their authenticity, recommended remedial measures, which were largely neglected by the maharaja.

A Kashmiri national movement was galvanized in 1931 when a state factotum forbade the imam to deliver a sermon before the customary Friday prayer. Mr. Abdul Qadeer answered with a fiery speech denouncing the maharaja's anti-Islamic injunctions. Muslims rallied to protest his arrest, and 22 were slaughtered when the police opened fire.

The British, predictably, did nothing. After all, it was difficult to distinguish the maharaja's savagery from the mass killings of Indians by the British in 1919, known as the Amritsar massacre. I would argue that this British callousness or aloofness was a pre-partition broken promise number one.

As Rudyard Kipling had versified to the world in 1899, the British Empire and suzerainties had been undertaken to discharge the "White Man's burden" of civilizing backward races or religions. But in Kashmir, it had apostatized from its promise and abandoned Muslims to the law of the jungle.

With the lapse of British paramountcy on Aug. 15, 1947, broken promises over Kashmir came not like single spies but in battalions, to borrow from Hamlet. Princely states enjoyed three options: accession to India, accession to Pakistan or independence.

But the choice, according to Indian Prime Minister Jawaharlal Nehru and tacitly endorsed by the British was to be made by popular referendum in cases where the creed of the ruler varied from the religion of the majority.

That fundamental democratic principle had been sternly applied by Nehru with military means in Hyderabad and Junagadh where the rulers were Muslim but their inhabitants largely Hindu. Kashmir presented a converse case: the maharaja was Hindu but the majority subscribed to Islam.

When paramountcy lapsed in Kashmir, the maharaja's despotic regime was tottering. An indigenous rebellion was in full swing. Instead of submitting to a referendum, maharaja’s vaulting and mean-spirited ambition prompted a plea to the Indian army for intervention.

Nehru responded with alacrity on Oct. 27, 1947, and intrigued to generate a bogus instrument of Kashmiri accession to India to justify its aggression. British scholar Alistair Lamb has persuasively exposed the forgery, a first cousin to the Tzar's Protocols of the Elders of Zion.

Indigenous Kashmiris fought Indian troops to a standstill. Contemporaneously, India's head of state, Lord Mountbatten, officially promised a Kashmiri plebiscite in plain language over which only Mr. Pickwick might puzzle:

"(I)n consistence with their policy that in the case of any state where the issue of accession has been the subject of dispute, the question of accession should be decided in accordance with the wishes of the people of the state. It is my government's wish that as soon as law and order have been restored in Kashmir and its soil cleared of the invaders, the question of the state's accession should be settled by a reference to the people."

India then raced to the United Nations Security Council (UNSC) on Jan.1, 1948, and championed a pair of resolutions on Aug. 13, 1948, and Jan. 5, 1949, that prescribed a self-determination vote for Kashmiris on the heels of U.N. supervised demilitarization. Pakistan eagerly endorsed that solution to Kashmir's disputed territory.

India, however, was soon undeceived of its delusions over Kashmir's political yearning. Recognizing that its people would never freely vote accession to India, it contrived excuse after excuse to frustrate a plebiscite.

When the U.N. proposed arbitration, a reference to the international court, or any other method of resolving minor demilitarization quarrels, India nixed them all. After a few years, it dropped all pretense of acceding to a referendum by unilaterally proclaiming its annexation of Kashmir. India's proclamation has never been accepted by the U.N., which continues to list Kashmir as a disputed territory and subject to the UNSC's self-determination resolutions.

Dr. Syed Nazir Gilani, the president of the Jammu and Kashmir Council for Human Rights (JKCHR), is correct when he said that: “Indian action of Aug. 5, 2019, in Kashmir has consequences at home, in the neighborhood and at the international level. This action is a breach of the terms of the Instrument of Accession and under the U.N. template on Kashmir India has loaded upon itself a very grave offence against the United Nations and the right of the people of Jammu and Kashmir to self-determination.”

Broken promises two, three and four thus represent India's reneging on its Kashmir plebiscite pledges made by Lord Mountbatten, Nehru and Indian delegate to the U.N.

Broken promise number five can be laid at the feet of the UNSC which has never exerted any moral or other clout to even nudge India toward compliance with its resolutions.

It seems that the UNSC has honored India's indefensible defense of its Kashmir broken promises because of its muscular military, nuclear and economic profile and hegemony in South Asia.

Broken promises number six, seven and eight came in 1966, 1972, and 1999. At Tashkent following the 1965 India-Pakistan war, promises were made by India to negotiate seriously over Kashmiri sovereignty. But nothing was done.

At Simla, following a 1971 war over Bangladesh, India again agreed to talk seriously about Kashmir. But again, the promise was honored in the breach, not the observance. During a brief honeymoon between India and Pakistan at Lahore in 1999, India once more promised genuine negotiations over Kashmir, and once more betrayed its pledge by instantly insisting that India's claim of sovereignty over Kashmir would never be placed on the negotiating table.

When U.S. President Donald Trump offered his office of mediation on July 23, 2019, to resolve the Kashmir dispute, Indian Foreign Minister Subrahmanyam Jaishankar said on Aug. 2, 2019, that any discussion on Kashmir will only be conducted with Pakistan and only bilaterally. Then Jaishanker broke promise number nine when he told Chinese Foreign Minister Wang Yi just two weeks later on Aug. 13, 2019, that Kashmir was an internal matter of India.

The train of broken promises over Kashmir might be forgiven if the consequences were innocuous or inconsequential. But I submit the opposite is the case. India exerts an iron-fisted rule over Kashmir that would stir the heart of Genghis Khan.

With approximately 900,000 military and paramilitary troops in the territory, gruesome human rights violations are perpetrated with impunity on a scale that makes East Timor under Suharto seem like a tea party.

Every human rights group that has surveyed the grim Kashmir landscape, including the Human Rights Watch (HRW), Amnesty International and the U.N. High Commissioner on Human Rights (OHCR), has been shocked and horrified by the daily atrocities against the people of Kashmir. Ditto for the annual human rights country reports of the U.S. State Department.

To hide its human rights inferno in Kashmir, India prohibits world parliamentarians, international broadcasts or unchaperoned international electronic media. With no heart-clutching pictures in the living rooms of the U.S. and the EU, no moral clamor has arisen to do something to relieve the horrors of millions of Kashmiris. But griping at the unfairness of the world is as otiose as shouting at the weather.

The people of Kashmir are not vengeful. Charity and magnanimity would be their loadstars if self-determination were honored despite so many betrayals. Let us hope that the last promise over Kashmir has been broken.