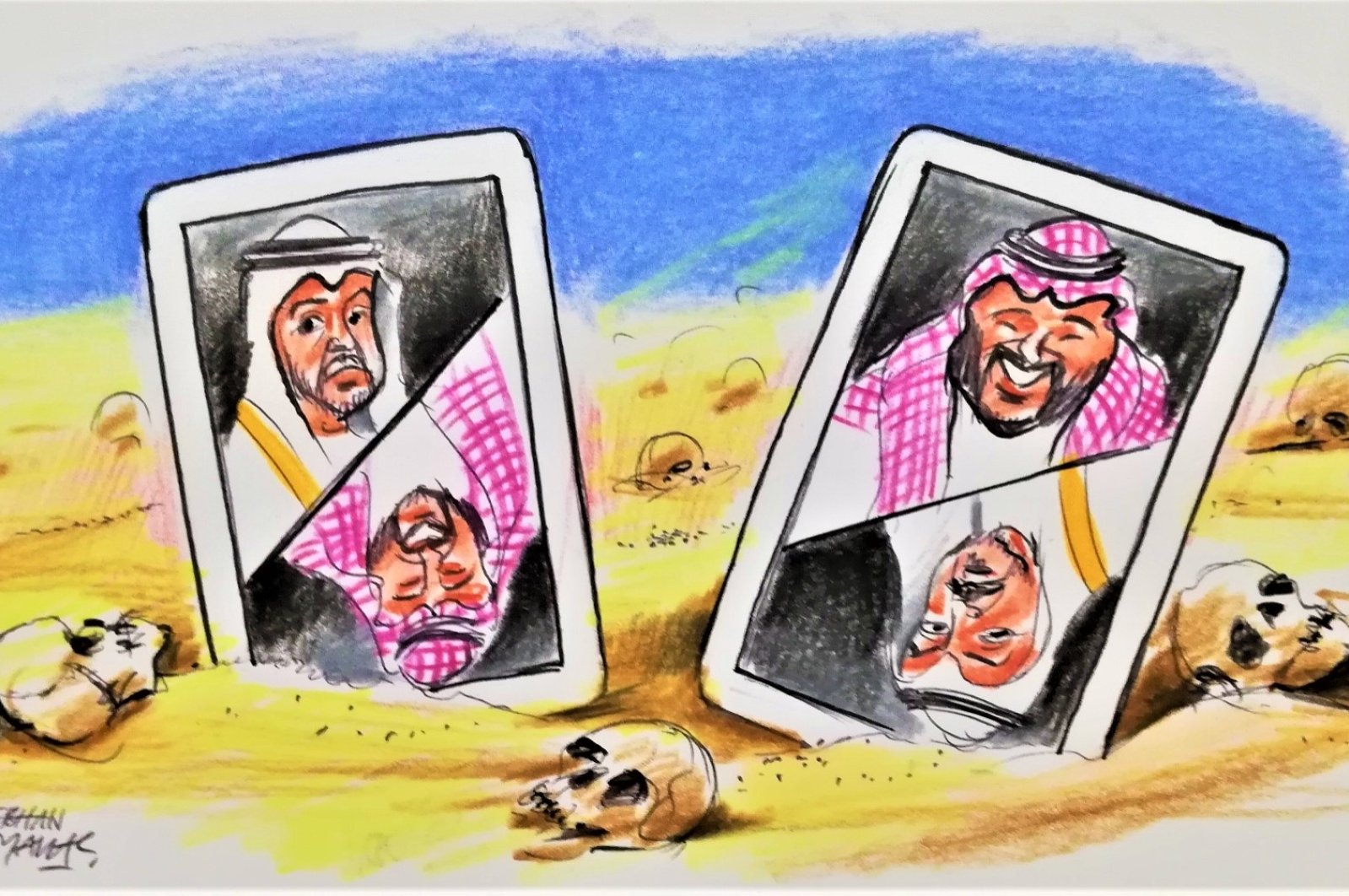 In 2015, the Saudi regime created an alliance of mercenary nations to wage war on Iran. Where? In Yemen. Iran did not and does not have a military presence in Yemen, therefore, the Saudi alliance faced the Yemenis in Yemen. Out of the nine members of the alliance, only two remain active: The regimes of Saudi Arabia and the United Arab Emirates (UAE). That is unless, of course, we include their arms suppliers, the United States, Britain and France, who continue to make financial gains from the Yemeni crisis, the most recent being the British arms sale to Saudi Arabia, which has demonstrably used those and other Western weapons in the genocide in Yemen.

The Saudi-UAE alliance’s war on Yemen with more than 20,000 airstrikes and the blockade, now continuing into its sixth year, has resulted in the killing of tens of thousands, death by starvation of 85,000 children and destruction of the country’s medical institutions, food storage, schools and transportation system.

Supporting secession threatens to split the nation of 30 million into never-ending warring mini-states. The creation and arming of militias across the southern region of the country and bringing in of foreign mercenaries to the country have wreaked havoc.

The total occupation and control by the Saudis and UAE of Yemen’s southern ports and islands has eliminated the political role of the internationally recognized Yemeni government, whose restoration had, until recently, been the pretext used by the Saudi coalition’s military intervention. These moves have resulted in the displacement, internally and externally, of millions of Yemenis, leaving most of them destitute.

Meanwhile, Iran stands across the Gulf waters. Neither Saudi Arabia nor the UAE – whose mantra is to fight Iran – are able to fire a single shot in its direction, fearing Tehran's retaliation, which they know will be swift, destructive and decisive.

In Libya, Abdel Fatteh el-Sissi threatens the same predicament, funded by the Saudis and the UAE, the financiers of every regional political upheaval, from Oman to Morocco and every country in between.

El-Sissi declares a red line in Sirte and Jufra, as if Libya is an Egyptian colony or under Egyptian trusteeship. He then threatens military intervention to fight Turkey. Where? In Libya, despite the fact that Turkey does not have a military presence in Libya.

If el-Sissi has the bravado, he knows where Turkey is in the Mediterranean Sea. But he will not dare, because he also knows that Turkey’s response will be swift, destructive and decisive.

Consequently, the Egyptian army, if it proceeds into Libya, will be faced by Libyans themselves. The Arab Egyptian Army will be facing an Arab Libyan population. Libya will be turned, by Arab intervention, into killing fields between Arabs.

Years of externally funded and armed proxy wars in Libya have failed to install a military junta led by putschist Gen. Khalifa Haftar. Even the support of major powers France and Russia has not been able to force the Libyan people to accept another brutal military dictatorship. The stage is now being set for a major military intervention that will replay the misery and destruction we witnessed in Yemen. The same forces that intervened in Yemen, with no vision, no exit strategy or in fact no strategy of any kind, other than death and destruction, are about to repeat that blunder in another Arab country.

Yemen was destroyed on the pretext of intervention aimed at restoring a legitimate internationally recognized government. In Libya, we see the exact opposite: a full-scale military intervention against the authority of a legitimate internationally recognized government in favor of a wayward military despot. Egypt, Saudi Arabia and the UAE, supported by France and Russia, will actually destroy more Libyan lives by attempting to install a brutal military dictatorship to replace a civilian-led political process.

Like in Yemen, Libya will see another Arab military intervention that results in the death and destruction of Arab lives and livelihoods.

Like before, Arab regimes once again will force more Arabs to flee their countries, in Yemen, in Libya and in Egypt. And where will most of them find refuge and safety? Many will probably find it in Turkey, which has already offered safety and refuge to more than 5 million Arabs who escaped the brutality of Arab despots and their western arms suppliers.

To our Egyptian brothers who might find themselves in Libya soon, killing and being killed by fellow Arabs, I remind them of this Arab proverb, roughly translated, “ What you do in the evening in your neighbor’s home will happen in the morning in your own home."

The judicious one will understand.