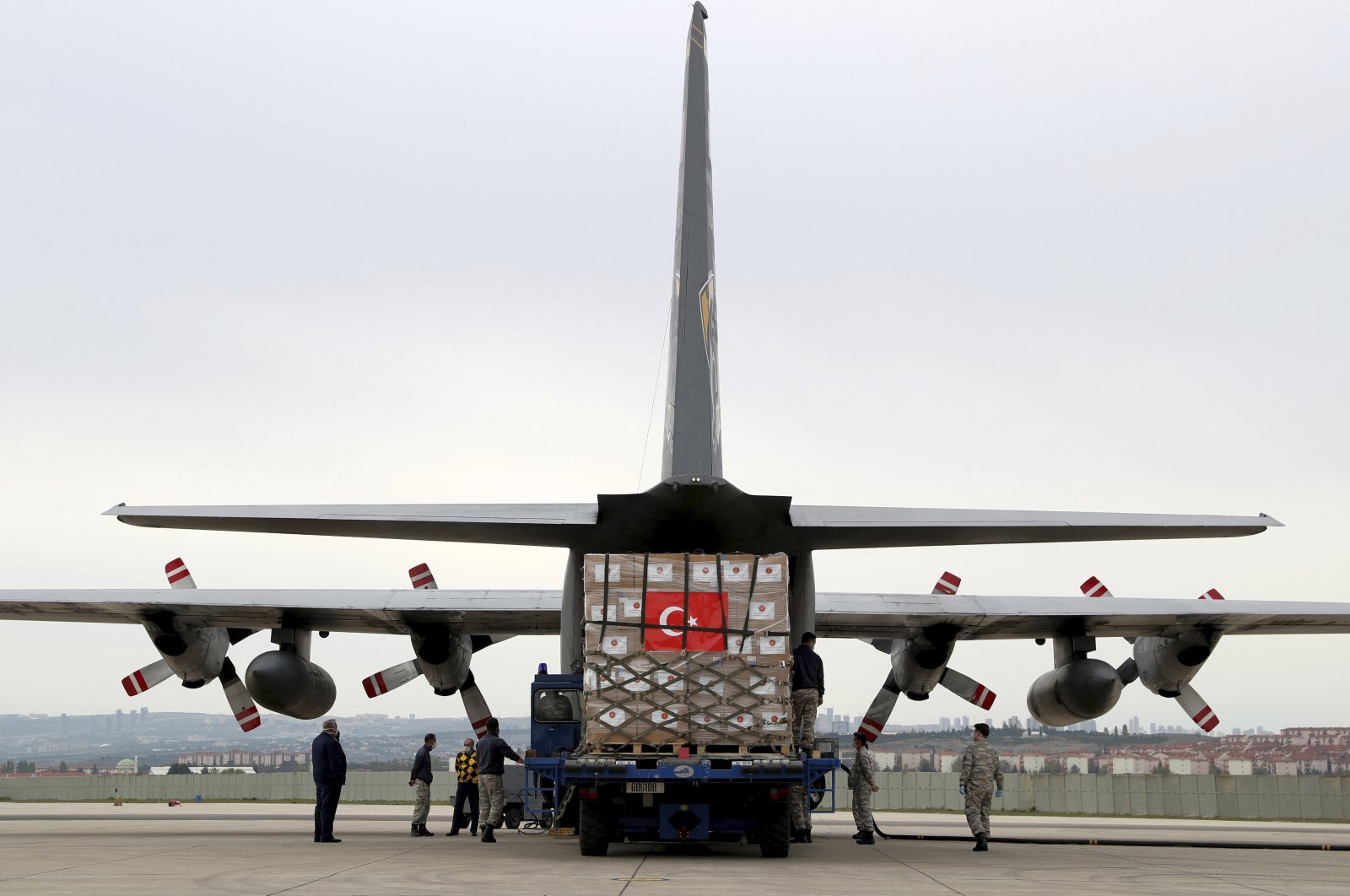 Turkish soldiers load a Turkish military cargo plane with personal protection equipment donated by Turkey to help the U.S. combat the coronavirus outbreak, at the Etimesgut airport outside Ankara, April 30, 2020. (AP Photo)
by Ali Çınar May 05, 2020 12:05 am
RECOMMENDED

Turkey has provided 57 countries with medical supplies in order to fulfill its global role in combatting the coronavirus. Following a phone call between President Recep Tayyip Erdoğan and U.S. President Donald Trump last week, medical supplies were readied within two days before being placed on two separate military cargo planes to the U.S.

Turkey’s Ambassador to Washington Serdar Kılıç, as well as U.S. State Department Assistant Secretary of State in the Bureau of European and Eurasian Affairs, Philip Thomas Reeker, were on the tarmac to greet the delivery at a U.S. military base.

Attached to the delivery was a letter signed by the Turkish president to Trump emphasizing the importance of the strategic partnership enjoyed by the two countries. Erdoğan further extended his deep solidarity with the U.S. Congress and the country’s media during this pressing time.

So, what is the importance of this aid and what does it really mean? Although Turkish-U.S. relations have had a rough ride lately, it is very important that Turkey supports its NATO ally in its time of need.

The United States is now in a serious fight with the coronavirus. In particular, the country has been suffering from a lack of medical equipment over the last two months. To put the severity of the crisis facing the country into stark perspective, the number of deaths caused by COVID-19 in the U.S. has now officially surpassed the number of casualties in the Vietnam War. According to official records, 58,200 Americans lost their lives in the Vietnam War, while the number of Americans who have lost their lives to the coronavirus is now close to 70,000.

Yes, a plane full of medical aid does not mean that a new page will immediately be turned in Turkish-U.S. relations. However, these kinds of actions taken by governments during crises start to click sooner or later. As someone who has been following Turkish-American relations for years, I assure you that Turkey has done something very genuine and meaningful.

Although the matters of the YPG-PKK and Gülenist Terror Group (FETÖ) remain unresolved in terms of their place at the center of Turkish-U.S. relations, I think that the two NATO allies supporting each other at this time is a cause for of a resolution to their outstanding issues. Plus, as U.S. Ambassador David Satterfield put it: “As this delivery indicates, the U.S.-Turkey relationship is strong and is one of our most important alliances, we look forward to continuing cooperation with Turkey on this issue and on many other common priorities.”

Thus, it was clearly important that the ambassador underscore the strength of the relationship between the two countries in light of continued cooperation.

Satterfield added: “Thanks to Turkey’s great effort to bring Turkish citizens home, we were also able to send more than a hundred American citizens back home.”

Erdoğan has accelerated the production of Ford ventilators thanks to having secured special authorization on the sale of the additional supplies from Turkey that Ford needs in order to produce the ventilators.

As a brief reminder, there are a total of 1,700 American companies in Turkey, providing employment to 90,000 people. These companies are worth $31 billion and had revenue of $35.4 billion last year, which makes up 3.5% of Turkey’s gross domestic product (GDP). Similarly, we see that many Turkish companies have rushed to enter the U.S. market over the last three years.

With this in mind, it goes without saying that many job opportunities are likely to emerge from renewed cooperation between the U.S. and Turkey.

According to U.S. Secretary of State Pompeo: “NATO allies must stand together in times of crisis. We thank Turkey for its generous donation of medical supplies and protective equipment to help us fight COVID-19. Americans are grateful for your friendship, partnership, and support.”

Michael Ryan, the U.S. Deputy assistant secretary of defense for European and NATO policies, said: “We are grateful to Turkey for the aid they have provided the USA with and the leadership model they have presented in NATO in the fight against COVID-19.”

Turkish Co-Chairmen Congressman Joe Wilson and Steve Chabot similarly published an official statement saying: "I am grateful to our NATO ally Turkey for their generosity." In addition, Congressman Alex Mooney and Congressman Alcee Hastings also thanked Turkey for the support during the pandemic.

Unfortunately, the U.S. media have played ostrich, with many of the same outlets who will report any news that goes against Turkey immediately having failed to show the country in a fair light even in the light of humanitarian aid. Although they have reported no news, many friendly Americans with whom we had an opportunity to speak have expressed their gratitude to Turkey.

I will end my article here with the words of Sufi philosopher Mevlana Jalaladdin Rumi, which are also printed on the packages of aid supplies: “After hopelessness, there is much hope – and after darkness, there is a much brighter sun.'”

Yes, I also believe that there are many suns after darkness to improve Turkish-American relations and solve the existing problems.

This aid has reminded us of the value of sincerity and friendship – but most importantly, that of humanity.