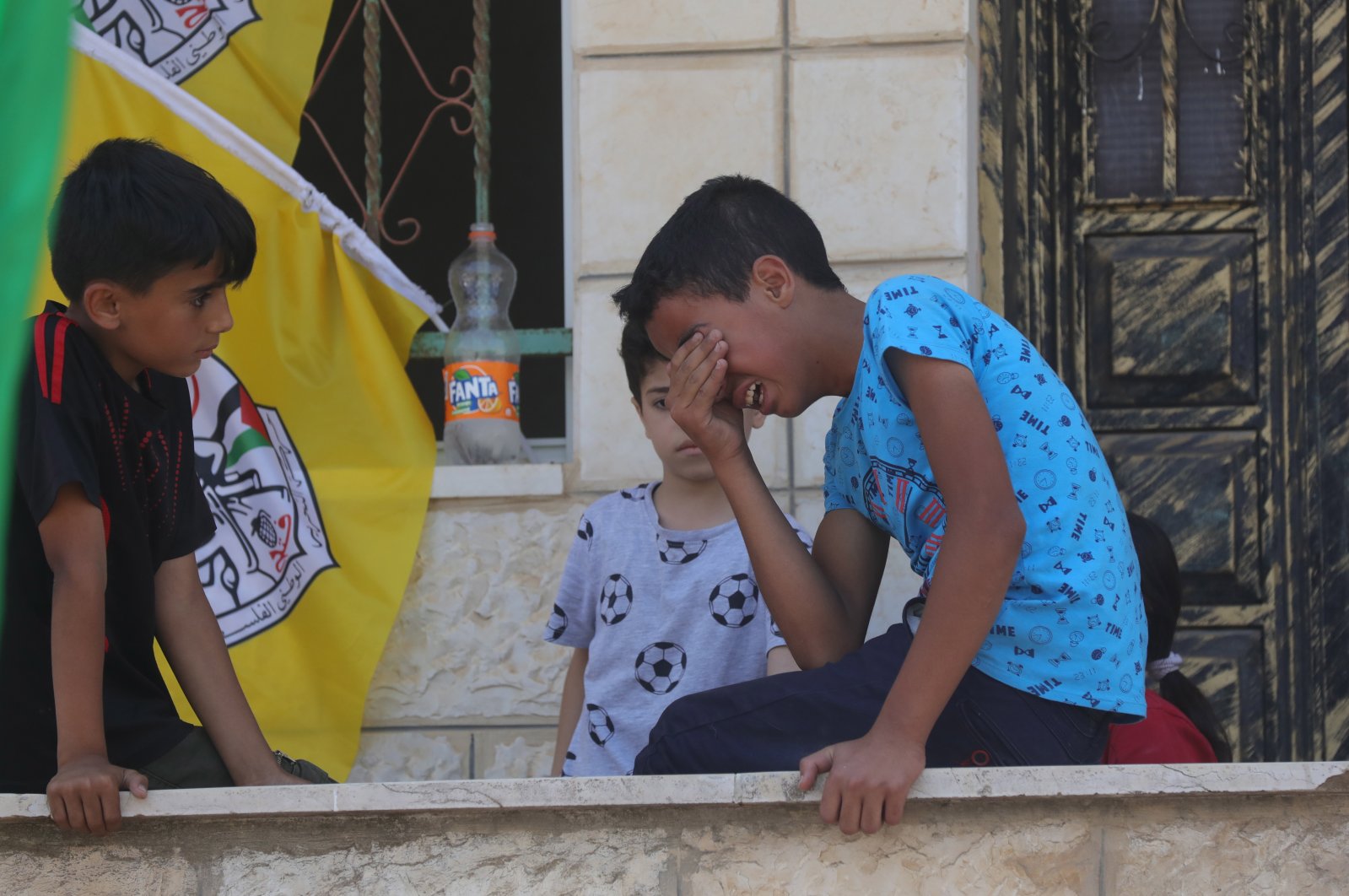 Although Israel's oppression of Palestinians affects everyone, it impacts children the most. Thousands of Palestinian children were killed by Israel and many were subjected to violence. These children are gradually beginning to lose hope for a better future

Mohammad Mo’ayyad Bahjat Abu Sara was shot and killed by Israeli forces as he sat in his father’s car near the entrance to the town of Beit Ummar located north of Hebron.

Six Israeli soldiers deployed near the road that connects Route 60 to Beit Ummar shouted at Mohammad’s father, to stop his car and then subsequently fired upon it.

The vehicle was approximately 50 meters (165 feet) from Israeli forces when Mohammad was shot and at least 13 bullets were fired at the car, according to an eyewitness.

Mohammad is the 11th Palestinian child shot and killed by Israeli forces in the occupied West Bank since the beginning of 2021.

Palestinian children suffer an unprecedented series of human rights violations as a result of Israeli military and settler activity in the Occupied Palestinian Territories (OPT).

Hundreds of children have been killed, thousands injured, arrested and hundreds of thousands of others exposed to repeated violence. They are denied an adequate standard of living, the right to education and adequate health care. These violations are the result of Israel’s intensification of preexisting policies implemented in the OPT aimed at tightening the grip on Palestinian land and the movement of persons and goods in these areas.

Palestinian children aged between 12 and 17 years, from the West Bank and East Jerusalem, continue to be detained and arrested by Israeli forces. Based on sworn affidavits by the children, they are subjected to various forms of ill-treatment and due process violations when arrested or detained that are illustrative of a retributive justice system.

The most common charge is throwing stones, for which the maximum sentence is 20 years in prison.

The circumstances under which many Palestinian children, mostly from the OPT, have been arrested, interrogated, detained and imprisoned suggest that there have been serious violations of the Convention against Torture, the Convention on the Rights of the Child and the Fourth Geneva Convention.

Members of Israeli security forces, including officers with balaclavas or with their faces blackened, routinely arrest children, often in the middle of the night, snatching them from their beds and taking them to interrogation rooms.

Arrests have been carried out by large groups of Israeli security forces (between 30 and 40 men), who arrive in military jeeps, surround the homes of the children and forcibly enter them, at times with guns drawn at family members with flashlights.

The noise of the military vehicles, the heavy pounding at the doors, the yelling of the soldiers and the screams of the minors’ family including small brothers and sisters usually wake up the whole neighborhood. In practically all cases, no explanation was given as to the reason for the arrest and no arrest warrant was shown.

Moreover, security forces have ill-treated the children and their relatives during arrest, employing means such as beatings, kicking, verbal abuse, humiliation and threats, and the destruction of property during searches.

Children are transported to detention centers in military vehicles, where they report being forced to lie face-down on the metal floor of military vehicles, denied bathroom breaks, deprived of food and water, physically assaulted, psychological abused, weeks in solitary confinement, and being denied access to a lawyer during interrogations.

After the arrest, in numerous cases, families have had to search for their children, as they were either not informed of or received misleading information regarding their whereabouts. The methods described above do not only violate international law but are also contrary to legislation regulating the arrest and detention of children of Israeli nationality.

According to Save the Children organization 81% endured physical beatings and 89% suffered verbal abuse, 52% were threatened with harm to their families, 86% were subjected to strip searches, leaving them humiliated and ashamed while 88% did not receive adequate and timely health care, even when explicitly requested.

Under international law, intentional lethal force is only justified in circumstances where a direct threat to life or serious injury is present.

However, investigations and evidence collected by Defense for Children International Palestine (DCIP), regularly suggest that Israeli forces use lethal force against Palestinian children in circumstances that may amount to extrajudicial or willful killings.

In its annual report on children in war, the United Nations report accused Israel of hundreds of “grave violations” in 2020. The report presented to the U.N. Security Council on May 2021, said that 340 Palestinian children were harmed in the West Bank, East Jerusalem and the Gaza Strip over the past year.

U.N. Secretary-General Antonio Guterres, the official author of the report, alleged that Israel’s offenses included the detention of 361 Palestinian children, dozens of whom reported physical violence by Israeli security forces. The report also accused Israel of killing eight Palestinian children in the West Bank and one Israeli boy, who died in a car crash while he was fleeing from Israeli police.

Israel allegedly “maimed” 324 Palestinian children in 2020, 170 by tear gas and 70 by rubber bullets. The report also accused Israeli forces of attacking 26 schools and hospitals, while settlers attacked another four.

According to the report, Israel prevented children from humanitarian access, including education and medical care. Some 28% of requests for access to health care for children in the Gaza Strip were denied by Israel.

Guterres called on Israel “to review and strengthen measures to prevent any excessive use of force, to ensure that force be used only when necessary and to minimize the effects of its forces’ operations on children and ensure accountability in all cases involving the killing and maiming of children.”

He also called upon Israel to better protect schools, end the practice of administrative detention and halt the recruitment of children as informants.

In addition, the report accused Israeli forces of 89 interferences with education, which include delays in getting through checkpoints, and firing tear gas near schools.

For its part, Human Rights Watch (HRW) in its recently released report called on the International Criminal Court (ICC) to open a probe into apparent Israeli war crimes committed during its recent 11-day assault on Gaza that killed 260 Palestinians, including 66 children. HRW concluded that Israel had committed apparent war crimes.

“You had people’s entire lives – their homes, their businesses, their wives, their children, their husbands – gone in a flash,” said Omar Shakir, Israel and Palestine director at HRW, who helped lead the investigation.

In the West Bank including in East Jerusalem, adolescent boys (and increasingly girls) are severely caught up in occupation-related violence.

In Gaza, the protracted humanitarian protection crisis continues to have a significant impact on the well-being of children and families. Successive conflicts have resulted in thousands of deaths, created high levels of psychosocial distress, and eroded public infrastructure. To date, the international community has failed to ensure proper protection of Palestinian children from the political violence of the Israeli government and settlers.

Israeli military's continuous offensives and its complete disregard for international law have frustrated any meaningful efforts toward implementing comprehensive protections for Palestinian children.

Children remain the most vulnerable and are paying the heaviest price of the conflict. They must be protected from violence, exploitation and grave violations and the international community must demand an end to Israel’s illegal military assaults and systemic impunity by investigating allegations of war crimes and holding the perpetrators accountable.