Personal data: An urgent case to deal with in modern times 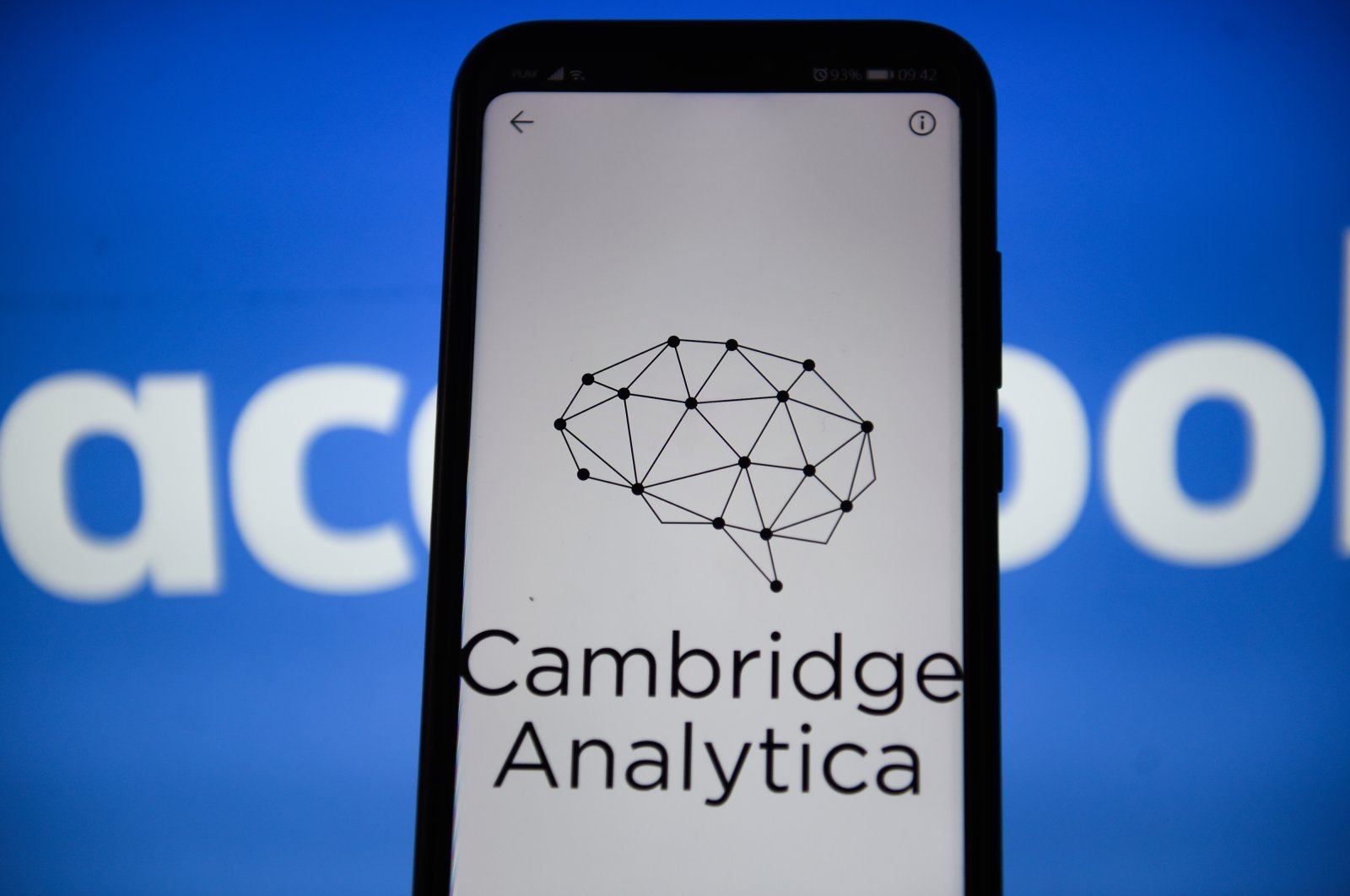 In this photo illustration, a Cambridge Analytica logo on a smartphone is held in front of a Facebook background, Sept. 24, 2019. (Photo by Getty Images)
by Ferhat Küçük Dec 25, 2020 12:05 am
RECOMMENDED

One of the most important issues that was frequently raised during the U.S. presidential election was voting security. The possibility of election interference through digital platforms, or cyberspace, was considered a serious threat. Huge digital platforms such as Google, Twitter and Facebook came to the fore as convenient tools in influencing voter behavior and manipulating election results in the U.S.

It was detected that Cambridge Analytica, a U.K.-based data analysis firm, acquired the personal information of millions of Facebook users during the election process by combining the improper use of digital assets, data mining, data brokerage and data analysis with strategic communication. It used this information to predict the behavior of U.S. voters and influence their preferences.

And the fact that U.S. President Donald Trump’s former chief strategist Steve Bannon was on the board of the now-defunct data-analytics of Cambridge Analytica at the time sparked huge controversy in the country.

Indeed, The New York Times and the Observer quoted an external researcher as saying that the company collected personal data about Facebook users for academic purposes.

Shortly after, Alexander Nix, CEO of Cambridge Analytica, was secretly filmed boasting about how his company had run Trump’s entire digital campaign and had resorted to bribing and honey trapping to defame politicians.

After the incident came out, an investigation was launched into Cambridge Analytica in both the U.S. and the U.K., while Facebook came under fire for the violation of personal data security.

In an interview with the Observer, Christopher Wylie, who worked with a Cambridge University academic to obtain the data, confessed that they exploited millions of people’s profiles.

Whistleblower Wylie also said that Cambridge Analytica was essentially set up to be a full-service propaganda machine.

The company used personal information taken without authorization in early 2014 to build a system that could profile individual U.S. voters to target them with personalized political advertisements, he noted. Hundreds of thousands of users were paid by Cambridge Analytica to take a personality test and agree to have their data collected for academic use. The data collection process, however, was not limited to this. Indeed, Cambridge Analytica’s analysis methods relied heavily on the academic studies of Michal Kosinski.

He also collected the statistics of the Facebook friends of those who took the test and thus created a “data pool” of millions of people's information.

Facebook’s policies allow the collection of friends’ data only to enhance the user experience and prohibit the sale or use of that data for advertising. The developments raised questions about the social network's role in targeting voters in the U.S. presidential election.

Operating under the umbrella of Alphabet Inc., which was founded in 2015 as a “conglomerate,” a structure formed by the merging of many companies working in different fields under the roof of one company, and a world giant with a market value of $1 trillion, Google has been at odds with the Trump administration as it has been accused of manipulating user data in the U.S. election and causing unfair commercial competition.

Since 2018, Trump has been alleging that Google's search engine services are being fraudulently and illegally operated, arguing that legal sanctions must be imposed on the company. Recently, his administration took a concrete legal step, filing large-scale litigation against Google through the U.S. Department of Justice.

Although the Trump administration's initiative is considered noteworthy in terms of its timing, the content of the litigation urges us to think that the issue should be addressed independently from the election agenda.

Google accounts for about 90% of all web search queries and about 95% of those on mobile devices in the U.S. As a result of its anti-competitive practice, the Trump administration claims that Google illegally obtains and uses user data, noting that adverse news about Republicans, and especially Trump, has been highlighted in Google searches.

Given that the Trump administration perceives Chinese companies as a threat to national security, this perception is also included in the litigation document.

Google has a huge amount of data in the digital environment as it has billions of users. User-specific data created using artificial intelligence (AI) algorithms, as well as obtaining the personal information of its users, is invaluable for Google.

Google constantly processes the information of its users. It can access and store huge data about what is searched, what products are purchased on shopping sites, what videos are watched on YouTube and where and by what means the Google Maps users go.

In addition, the value added to Google by the big data created as a result of obtaining and storing all kinds of personal data from devices with the Android operating system is remarkable.

Through the storage and processing of all this big data, Google also develops unique solutions with the concept of “personalization," thus providing special services to its users. Accordingly, the company's algorithms determine which results or services will be highlighted based on the user's past searches and data. In light of this information, Google can specifically select any information about its users and offer relevant content to them.

In addition to such personalized search results, Google, by and large, may have promoted results against Trump or U.S. President-elect Joe Biden among other search results. Moreover, it highlights news stories against senior figures close to Trump in order to influence its users’ decisions about their preferences in the U.S. election. There is a vast pool of information here, from fake news content to images and even videos.

It announced that it could provide free advertising loans for the Democratic Party, support their campaigns and censor the contents of Republicans on the search engine.

The debate over Google's interference in the U.S. election continues over the claim that it affects voter behavior in general, as mentioned above. After all, in the online world, if one of the cyberattack techniques aimed at disrupting or blocking a system is not applied, the cyber operation is only an “information operation.”

Here, the content that may affect voter behavior through Google or direct the public with incomplete or incorrect information is highlighted.

Based on Google search results, elements such as news against Trump, images and content prepared with fake or false information, fake polls and manipulated election results are generally considered election interference.

The Trump administration is also concerned about such interference in the U.S. election in particular. Therefore, it is necessary to take this into account when addressing the reasons why Trump is almost at war with Google.

The situation in Turkey

Turkey is also discussing whether Google and Facebook are in cooperation with the U.S. administration and intelligence services, and even that technical intelligence activities of agencies such as the National Security Agency (NSA) and the Central Intelligence Agency (CIA) are largely conducted by Google.

Google is referred to as “the intelligence company with the most valuable data in the world” and as the “big data baron” because it has the personal data of millions of users.

The U.S. has been discussing whether global giants such as Google, Microsoft and Facebook are supported by the globalists and the Democrats, and are considered dangerous by nationalists and Republicans.

Political scientists, lawyers and analysts in the U.S. think such lawsuits could also be filed against other technology giants.

It has been pointed out that social media platforms with huge economic size, such as Facebook and Twitter, in particular, can be the next target of such cases.

It is also worth recalling that Facebook was sued in U.S. courts after the 2018 Facebook and Cambridge Analytica data scandal was unveiled.

The fact that digital platforms such as Google, Facebook and Twitter control the global flow of data and communication, coupled with the international economic power they have, is considered a threat by many states. Such digital empires that consider themselves superior to states, and relatively more powerful than them, may ignore a nation's demands or its local legal regulations.

As in the case of the U.S., it is predicted that legal steps against Google, Facebook and Twitter will mount in the future, and other states may be involved in this war as the dangers of violating critical issues such as national security arise.

It may even have been used in Turkey’s constitutional referendum. The data leak scandal shed light on the dimensions of the personal data security problem.

While the accusations against Cambridge Analytica and Facebook remain serious, it reveals that the social network allows the blending of its users’ personal data and that the system is not limited to the U.S. alone. The data blending system may attract the attention of governments and it may even have been used in Turkey in the last constitutional referendum.

The claims that such manipulation was in place in the U.S. election, the U.K.'s Brexit and the recent constitutional referendum in Turkey are very serious.

Domestic statements about the leak reveal that data collection is not limited to the U.S. alone. It appears that information blending is also true for countries that have problems with protecting the right to privacy and personal data.

At this point, while the protection and storage of personal data is considered crucial, companies that receive billions of dollars to support governments do not hesitate to record our personal data and use it for commercial and political purposes. We must stand against these manipulative moves on a national and global scale.

Well, has Turkey made any amendments about the protection of personal data? Turkey has made various legal and constitutional regulations in this regard.

Following the 2010 constitutional referendum, under law No. 5982, the following subclause was added to Article 20 of the Constitution that regulates the right to privacy: “Everyone has the right to request the protection of his/her personal data. This right includes being informed of, having access to and requesting the correction and deletion of his/her personal data, and to be informed whether these are used in consistency with envisaged objectives. Personal data can be processed only in cases envisaged by law or by the person’s explicit consent. The principles and procedures regarding the protection of personal data shall be laid down in law.”

Thus, the protection of an individual's personal data was clearly given constitutional assurance. Subsequently, the Personal Data Protection Law (KVKK) was adopted.

As a result of advances in information and communication technologies, information has become a commodity and power, and it was inevitable for governments to protect it legally.

On the other hand, as required by the rule of law, we need to impose legal sanctions on companies such as Cambridge Analytica that claim to use “data development and mass segmentation techniques” that provide “deeper information” and “psychographic analysis” about the target audience.

Briefly, as in the case of Cambridge Analytica, one of the most important agendas of our age is to rein in companies that use what is called “behavioral micro-targeting” to estimate “needs” and how these needs can change over time, for the sake of their political interests.

However, this will deal a major blow to democracy. In short, it is necessary to legally oppose academic data and digital tools that are used by companies for commercial purposes and undermine democracy.