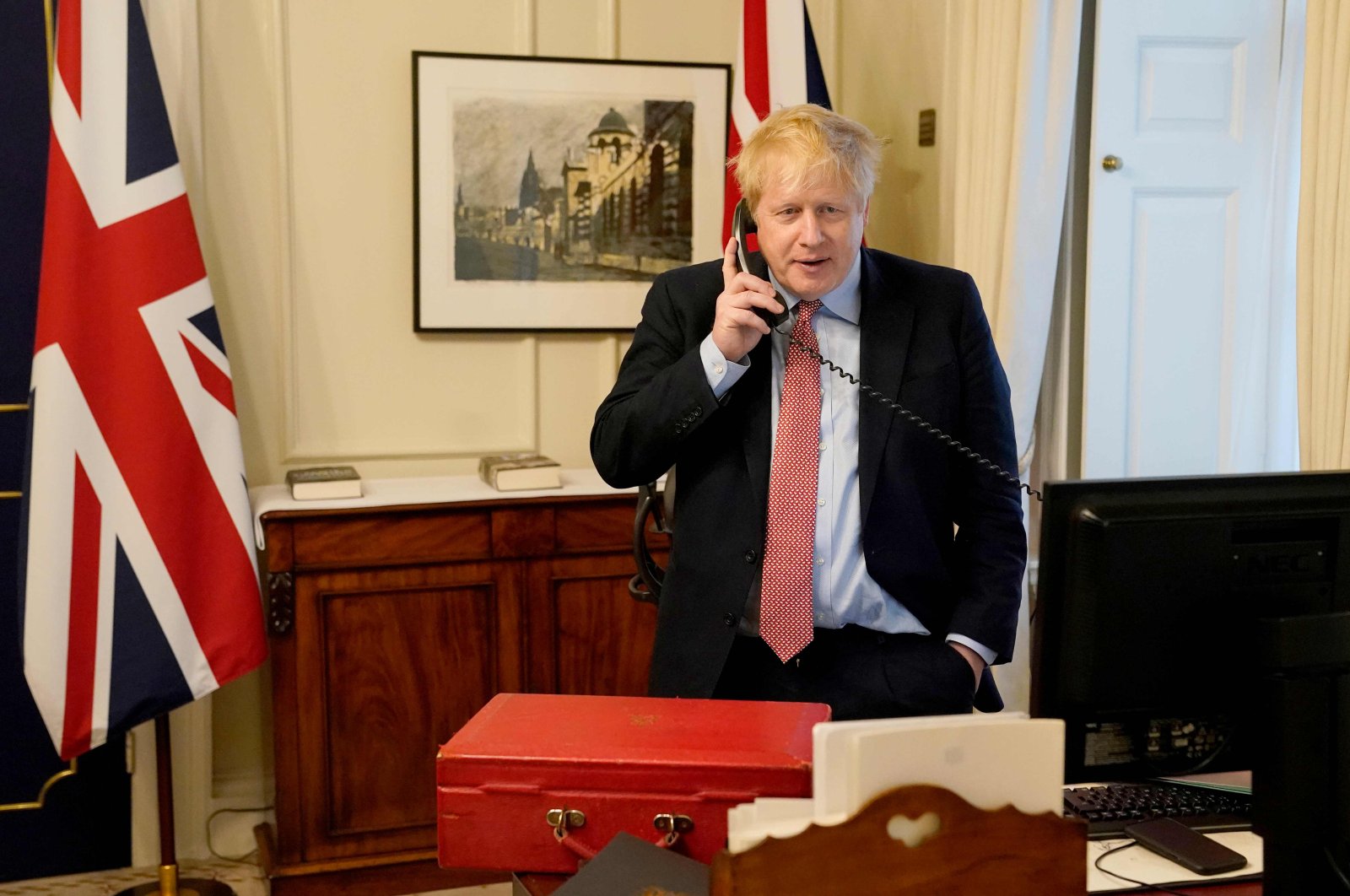 Britain's Prime Minister Boris Johnson on the telephone in his office in 10 Downing Street, to Queen Elizabeth II for their weekly audience during the coronavirus crisis, Wednesday, March 25, 2020. (AFP Photo)
by Bashdar Pusho Ismaeel Mar 30, 2020 12:05 am
RECOMMENDED

With the COVID-19 coronavirus wreaking havoc across Europe, the United Kingdom is one of various countries deeply impacted by the pandemic, with the government’s strategy and next moves firmly in the spotlight.

Much like two of the continent's worst-hit nations, Italy and Spain, the U.K.'s infection rates started on a relatively slow trajectory. However, in mere days, the wildfire of infections and deaths has threatened to overwhelm the country's National Health Service (NHS).

With infection rates on the rise and large jumps in daily deaths rates, the government's response has come under intense scrutiny.

Many have argued that the response of U.K. Prime Minister, Boris Johnson, and his cabinet has been inconsistent, with mixed signals having been given on the extent to which social distancing has been required and what appears to be a heavy failing in regard to heeding the lessons of Italy.

In fact, many analysts have pointed to statistics that ominously show the U.K. as roughly two weeks behind Italy. In some ways, Italy was in a better situation to cope than the U.K., given its higher quantity of ventilators and facilities, but even then, the country is coping with nothing short of a tsunami despite a strict social lockdown having been in place for almost three weeks.

In general, European governments moved too slowly when the crisis first gripped China in December 2019. In terms of poor preparations, the U.K. is no different. It did not need to wait for a crisis to emerge that is now on the brink of beyond control when it could have started stockpiling ventilators and other medical facilities much earlier.

Ironically, for the public, stockpiling has been the order of the day, with supermarket shelves bare of essential goods as the panic begins to set in.

Westminster finally closed schools after vehement outcry, and when it became apparent that sections of the public were not taking the government's hints on social distancing with the seriousness they deserved, No. 10 decided it had no choice but to announce a strict lockdown of the country this week.

To its credit, the government at least quickly changed track when it became apparent that their policies were not working. For example, had the government continued in its loose approach, it is estimated that an excess of 50,000 lives would have been lost.

Now, like most countries, the focus of the U.K. is on buying crucial time. Although infection rates have not reached their peak, some hospitals have already struggled to cope and medical supplies are running low.

COVID-19 is not about to disappear and the goal for the moment seems to be to manage the surges in cases in a way that does not overwhelm health facilities and lead to unnecessary deaths.

Deaths, of course, are sadly inevitable, and the public has been slow to realize that everyone has a role in the fight against a virus that does not distinguish between the old and young or rich and poor.

With Johnson now having tested positive for COVID-19, it is evident that none are immune to this invisible enemy.

Piecemeal isolation does not work, and all members of the public must take heed of the government's restrictions. If the country stands any chance of limiting deaths, buying time and importantly, avoiding lockdowns that span several more months, then this is the cost.

Even a three-month lockdown will be crippling for the economy, let alone society at large, with a general silence cast over most high streets, parks and malls since the lockdown has intensified. Nevertheless, in the grave outlook the country faces, it is better to grin and bear a three-month lockdown than risk a long-term one that, for now, neither the public nor economics dare contemplate.

With the lack of a game-changing vaccine, the biggest weapon comes in the form of mass testing. Moreover, this is where the U.K. has greatly failed. The already high number of virus cases are likely to get substantially higher as they only take into account the tests performed at hospitals. The thousands more who proved positive with mild symptoms, but who are advised to stay at home and not tested, would certainly swell the official infection rates.

South Korea is a great example of the effectiveness of mass testing, contact tracing and isolation, which have helped control the impact of the virus and mortality rates.

Now the U.K. is desperately trying to rush through a new antibody test that should be available in weeks and that will identify members of the public who have had the virus and thus, in all probability, have developed immunization. Such tests could allow normal life to resume sooner.

But like the elusive vaccine, even the test kits will take many weeks to distribute to the masses.

The fight against COVID-19 is no different to any war; the only difference is that the enemy is invisible. Not since the two world wars of the past century has a chain of global events led to so much of the world at one time facing common suffering, deaths, uncertainty and despair.

For now, the U.K. and other European countries have to continue the battle with all their might to defeat the deadly enemy.