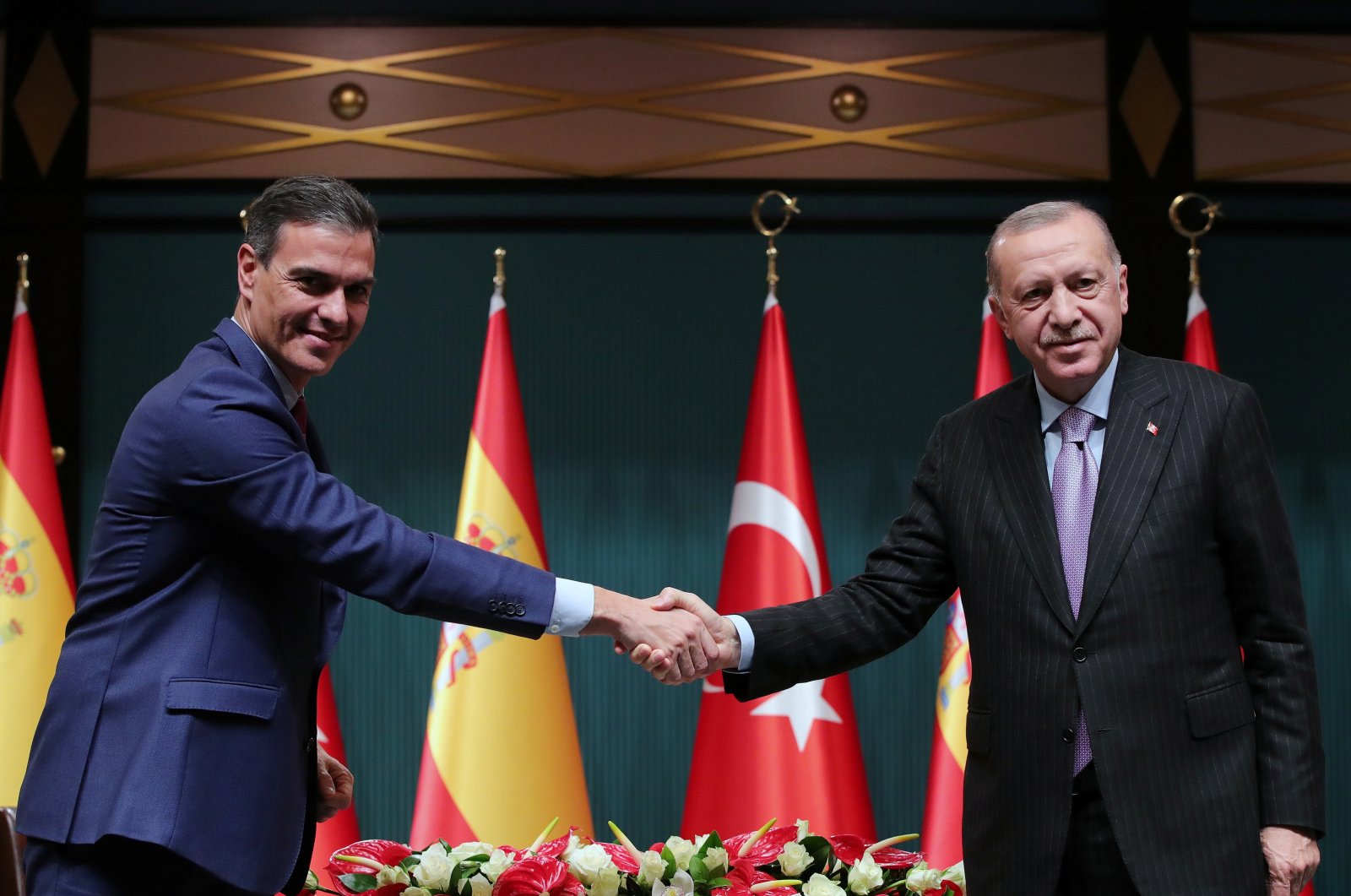 With a mutual-interest-based approach, the two countries can further improve their ties at the political, economic and social levels

Spanish Prime Minister Pedro Sanchez paid an important visit to Ankara on Nov. 17 and attended the Turkey-Spain intergovernmental summit with President Recep Tayyip Erdoğan. After the visit – deemed important for the strengthening of bilateral relations that have been dormant for a long time – commercial ties, in particular, are expected to strengthen between the two countries.

In order to make sense of today’s Turkish-Spanish relations, it is necessary to briefly look at the historical background of bilateral relations. In this context, it is worth mentioning that the two sides were engaged in a tight power struggle in nearby regions until the 16th century. However, after the Battle of Lepanto in 1571, the two sides never entered any wide-ranging military conflicts. Spain’s orientation toward newly discovered continents for exploration purposes instead of the area dominated by the Ottoman Empire in this period was the main factor that minimized the risk of conflict between the parties.

Regarding political relations, it can be said that Ankara and Madrid have no serious and visible problems because there is no area where the two countries struggle for power in terms of foreign policy. For instance, there is no tension between Turkey and Spain like the high-level tension between Turkey and France in the Eastern Mediterranean, Libya, Nagorno-Karabakh or Syria.

Additionally, both parties are very sensitive to the issues that are important to each other. For example, since both sides are fighting ethnic and separatist organizations – the PKK in Turkey and the ETA (an acronym for Euskadi ta Askatasuna or “Basque Homeland and Freedom” in the Basque language) in Spain – they are able to understand each other regarding counterterrorism. It should also be noted that the fact that Spain is among the least preferred destinations for Gülenist Terror Group (FETÖ) militants minimizes possible risks in bilateral relations.

Looking at the European Union dimension of bilateral relations, Spain does not oppose Turkey’s EU membership, unlike some other member states such as Austria, France, the Greek Cypriot administration of Southern Cyprus or Greece. As a matter of fact, Sanchez openly stated that they "want Turkey to be a part of the EU” in the meeting with Erdoğan. Therefore, Madrid’s constructive attitude toward EU membership naturally encourages Turkey to strengthen relations with Spain.

On the other hand, it should not be forgotten that contrary to the “clash of civilizations” thesis that the West tried to produce and impose on the whole world, Turkey and Spain pioneered the Alliance of Civilizations project in 2005 with the encouragement of the United Nations. In troubled times in the post 9/11 era, the alliance became a unique and inclusive platform for world states. Although international conjuncture did not allow this project to progress, the two countries’ co-sponsorship of such a project was recorded as an important initiative in every respect.

As for the perceptions of the Turkish and Spanish societies regarding each other, there is obviously no historical, political or cultural basis that could lead the parties to hold negative views.

Although the Turkish and Spanish societies, which have the characteristics of Mediterranean societies, are geographically located at the two ends of Europe, it can be said that they have started to get to know each other more closely due to the accessibility provided by tourism today. However, it goes without saying that La Liga is one of the most followed sports organizations in Turkey and that universities in Spain are frequently preferred by Turkish students as part of the Erasmus student exchange program.

What is more, Spain, which is one of the two countries in Europe most affected by the COVID-19 pandemic along with Italy, was almost helpless in the first months of the pandemic and was desperate for help from other European countries. However, in an environment where countries were dealing with their own troubles, Turkey donated medical aid materials to Spain without expecting anything in return. Turkey’s helping hand within the scope of humanitarian diplomacy at such a difficult time naturally made perceptions of Turkey more positive in the eyes of Spanish society.

In addition, the fact that the foreign trade portfolios of the two countries are very similar and the products that are relatively easy to substitute in their trade can be seen as other reasons for the low level of trade volume.

The fact that motor vehicles and textile products are at the forefront of products exported by Turkey to Spain, according to 2020 data, stands as important information. In Spain’s exports to Turkey, motor vehicles, plastic products, machinery and mechanical devices are at the top. From this point of view, it is understood that agriculture, energy and high-tech products remain important in trade between the two sides.

Also, 775 Spanish companies have already made direct investments in Turkey worth approximately $10.68 billion. In this respect, Spain ranks seventh among the countries that make foreign direct investments in Turkey. On the other hand, only 85 Turkish investors are currently present in Spain. This situation reveals that Turkish investors, who cannot overcome the language barrier, do not know the Spanish market very well.

While it is well below its potential, the trade value can easily increase to $20 billion with fairs that could be organized frequently between the two countries and visits that could be made between potential investors.

Thus, by overcoming the shallow waters in bilateral trade, there are opportunities to explore in many different fields, from agriculture to finance, the defense industry to health. At this point, it should be reiterated that Spain is providing supporting the design process of the TCG Anatolia, Turkey’s first multi-purpose amphibious assault ship. Based on this, Turkey’s breakthrough in the localization and nationalization of its defense industry in recent years represents opportunities to increase cooperation between the two sides.

To summarize what has been said so far in a single sentence: Turkish-Spanish relations need to be in a stronger position politically, economically and socially.