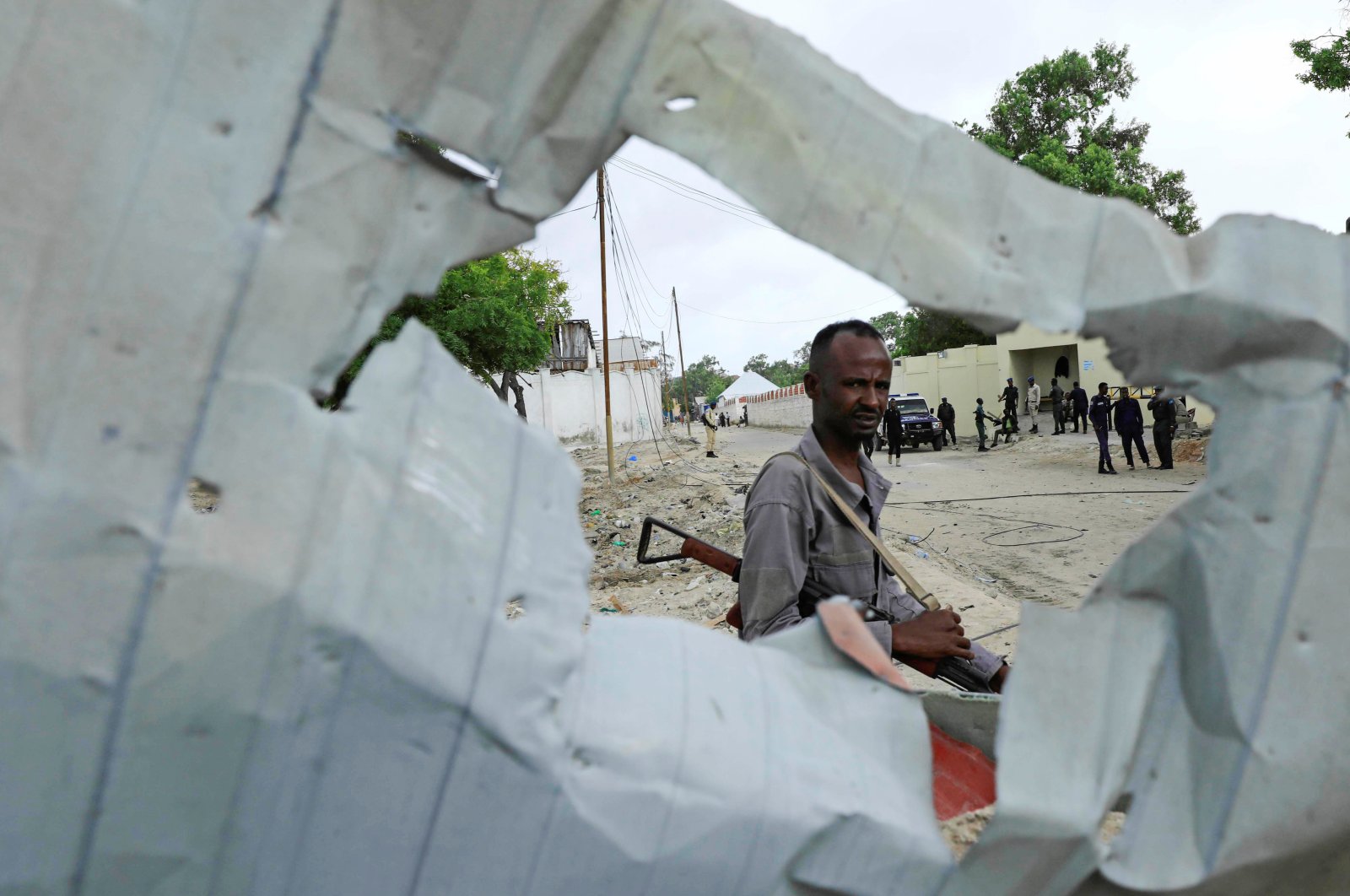 A Somali policeman walks at the crime scene after a suicide car bomber drove into a checkpoint outside the port in Mogadishu, Somalia, July 4, 2020. (Reuters Photo)
by Mohamed Salah Ahmed Jul 10, 2020 12:05 am
RECOMMENDED

July 1 marked the 60th anniversary of the unification of the two Somalilands (the British Somaliland protectorate and the Italian Somaliland). But this time, the commemoration of this historic day came at a time when most Somalis believe there is a hope within reach and a way forward could compensate for the past 30 years which is characterized by the fragmentation of the country, lack of hope, consistent political chaos, fragile economic growth, repeated drought and famine and the ongoing war against terrorist groups such as al-Shabaab and Daesh.

But in reality, that unity is just imaginary and does not exist in reality. The union of the two Somalilands that produced the first modern state that Somalis ever had in 1960 ended 30 years ago when the clan rebels put an end to the rule of the Siyad Barre regime in 1991. In fact, the ousting of former Somalian President Siad Barre’s regime was the last phase of a longstanding struggle between the military regime, which adopted cruelty and brutality to stay in power and the people who were not happy with the way things were going including lack of freedom, oppression, a declining economy and the sense of inequality among the clans.

Almost 30 years later, despite the sense of anticipation and optimism among Somalis, the country is far from united and unified. The political realities on the ground give you a glimpse of that fact: despite the resumption of talks between Somalia and Somaliland, yet it is incontestable that the Somaliland issue is still a complicated one and there is a long way to go and many things that need to be done in order to convince the successionist groups in Somaliland to rejoin the union. Even if the Somaliland issue is sorted out, it is obvious that Somalia will not be the way it was in 1960. Somalis should be ready for a new Somalia, a different one with new social contracts and political and economic systems.

Moreover, the complicated relationship between Puntland and the federal government is another sign of the disunity among Somalis. Puntland, which claims to be an autonomous administration, has been blaming the federal government for not respecting the provisional constitution of the county and creating nonstop disruption and political chaos within its regions. This Byzantine relationship also proves that the country is miles away from unity.

Therefore, celebrations and commemorations do not help the country to solve its political, societal and economic problems that resulted in this division and fragmentation in the first place. Instead, Somalis should have a real discussion on what went wrong. Why did the unification fail and what can be done to compensate the past 30 years we wasted on destroying the legacy of our founding fathers who selflessly and gallantly fought for our freedom and liberation. Furthermore, it accelerates our efforts to establish a more effective unification.

This is what two prominent Somali scholars Dr. Afyare Elmi and Dr. Abdi M. Hersi argued in their piece in Goobjoog, a Somali owned news site. They called for a national debate and genuine reflection on what we have achieved since our independence. As well as, what needs to be done to end the status quo that Somalia has failed to break it for the last 30 years. But what this debate should focus on is the variety of topics, ranging from state and peacebuilding models, economic revival, cultural and religious reforms and so on.

Since the military regime of Barre was ousted in 1991, Somalia has been seeing a post-civil war state-building aimed at reaching an inclusive peace and create an effective authority that would heal the previous wounds left by the brutal dictatorship of Siad Barre and provide physical and economic security.

Nevertheless, the international community has been playing a vital role in this process since the beginning, but their efforts have not been successful and beneficial for both the country and its citizens. The question of why or what went wrong has remained mysterious, as well as why the international community has struggled to rebuild the failed state of Somalia for almost 30 years.

In my opinion, there are two reasons why the international community or so-called state builders have not succeeded in these conflict and war-affected areas including Somalia. First and foremost, the state-building model, which is a neoliberal one, seems to be ill-suited to the development and security challenges of Somalia.

Second, the implementation method of a top-down approach, which the international community has been applying to Somalia and other conflict-affected environments, has miserably failed to heal the previous wounds that led to the state collapse and enable the formation of better social and political systems which are based on tolerance, harmony and coexistence to avoid the repetition of the same scenario. Therefore, the lack of tangible results from both approaches demonstrates the incompatibility of both models with the priorities of Somalia as a country recovering from conflict.

The matter of the fact is that the security challenges of Somalia constitute a significant obstacle to peace-building and economic development. Moreover, the developmental approach of the international community also seems to be hampering the creation of government institutions that can stimulate economic growth and deal with the developmental challenges Somalia is facing, including, the lack of economic opportunities, unfair and unjust judicial system, lack of inclusive political system, absolute poverty and high rate of unemployment. What our political elite needs to understand is that neoliberalism stands for free markets and growth led by the private sector investment which, in other words, means economic policies are driven by privatization, market deregulation and fiscal austerity.

Its main objective is to create effective capitalism which will allow the development of the private sector. To be precise, the neoliberal approach gives preference to the markets over states but also limits the role of the state in supporting development. Such a model gives the state only the authority to set rules and build institutions for the effectiveness of the market. However, the proponents of neoliberalism acknowledge the role of the state in economic and social developments, but as a partner, catalyst and facilitator and never accept the state as an economic actor or, in other words, as the driving force of the economy and market.

For neoliberals, the private sector remains central for economic stimulation and growth. But the important question that those who are shaping the country’s economic policies should ask if such models would help Somalia revive its economy?

To be realistic, what Somalia needs now is strong government institutions that would control and guide the development objectives of the country. But this idea seems to be at odds with the neoliberal model and its efforts to accelerate private-sector investment.

However, neoliberalism had gained most of its successes in the late 1970s but has its roots in enlightenment liberal humanism or classical liberalism; the belief that people were free to live their lives without a great deal of interference from the government. But whatever success neoliberalism achieved for the last five decades in western countries, unfortunately, it has not succeeded to construct or revive the wrecked economies of the so-called failed states such as Somalia.

For instance, as François and Sud claim in their research in 2005, the economic growth of East Timor averaged 3.3% for the five years following the establishment of the U.N. Transitional Administration in 2000.

Moreover, in Afghanistan, the economic recovery policies of NATO after the intervention was mainly temporary for the time being and has ended up in failure. And Somalia is not an exceptional case. Then, what is the alternative model that Somalia and other fragile states could adopt to revive their economies?

Some of the biggest state-building projects we have seen since the end of the Cold War include Afghanistan, Iraq, Haiti, East Timor, Democratic Republic of Congo, Somalia and some others. But despite the enormous amount of money and efforts that the international community put into state-building, many prospects have not been achieved in these countries as they continue to be considered among the most fragile and failed states in the world.

In Somalia, for example, there have been over three decades of external efforts to build a functioning central authority but tangible results have yet to be achieved. There are many reasons for this, not least of which are powerful local interests in perpetuating weak government institutions, facilitating corruption and illicit trade deals, political conflict among the political elites regarding the political system of the country, failure of government institutions to provide physical and economic securities for its citizens, the issues of al-Shabaab and how to deal with them, massive unemployment and poverty and other problems.

Having said that, some noteworthy prospects have occurred at the regional level such as Somaliland, which unilaterally declared its independence from the rest of Somalia and the autonomous regional state of Puntland, both with formal and informal governance structures in place. It is worth noting that the establishment of these two regional administrations had been achieved through a bottom-up approach where the demand for jurisdiction came from the local people, unlike the national government.

This indeed explains why the top-down approach of peace and state formulation had not worked well at the national level. Because it lacked what these two administrations have, which is local demand and consensus. Now, when there is some sort of local demand and people have gotten sick of chaos, anarchy, political confusion, lawlessness, poverty, unemployment along with other challenges, the state-building model, which is supposed to help the eradication of these severe challenges and promote economic growth and security, does not seem to be compatible with the work that needs to be done in Somalia.

So, the question remains what is the alternative? What sort of state-building model does Somalia need to transition? The developmental state would be an appropriate model that would conceivably help Somalia to reconstruct its principle government institutions. As a matter of fact, many countries from all around the world have adopted this model and achieved miraculous economic success.

For example, the economic success of East Asian countries was justified because of their developmental state model. A developmental model that was driven by an obsession with development, as well as, their hunger for catching up with the rest of the world.

Therefore, after 30 years of trial and error, I think it is time that Somalia needs to rethink its peace and state-building models, defy the orthodoxies set by the international community and adopt a more heterodox approach that would help exploit its natural resources, which will also contribute to economic development, security improvement and the establishment of enduring peace in the country.

A developmental state would be a good option for a country like Somalia who is recovering from violent conflict and fighting against many challenges. It's not too late for Somali political elite and policy and decisionmakers to transition the country’s state-building model from the current dysfunctional peace and state-building models to a more effective and decisive model driven by local demand and development objectives.