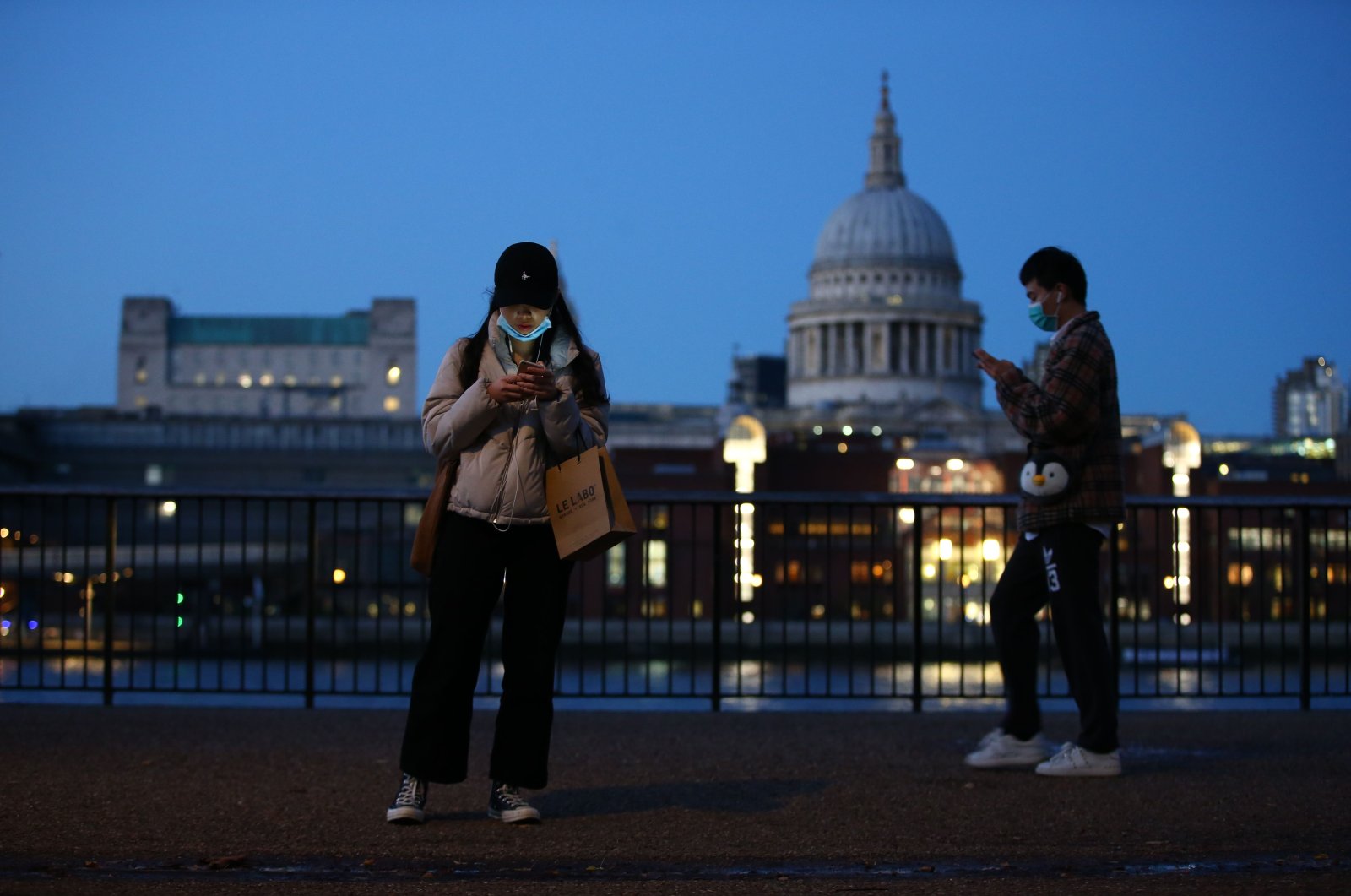 Pedestrians wearing masks because of the coronavirus pandemic walk by the River Thames with St. Paul's Cathedral in the background as the U.K. prepares to head into a second coronavirus lockdown in an effort to combat soaring infections, central London, Nov. 3, 2020. (AFP Photo)
by İpek Tekdemir
Nov 05, 2020 12:05 am

The European Union has seen a variety of protests against the partial retightening of measures in countries like Italy and Spain. In countries like Belgium and Germany, protests have also erupted. As the fear of another lockdown looms, it is important to weigh the pros and cons and discuss alternatives.

The earlier restrictive reaction to the pandemic between February and July 2020 resulted in roughly a 3% decline in the gross domestic product (GDP) across the EU, according to the European Commission's analysis. Given that the 2019 GDP was $15.15 trillion, the loss of wealth has been massive.

The EU economy has to avoid another shutdown at all costs. The damages are too high in terms of destroyed wealth but also in terms of an increase in unemployment that could not be sustained with the existing bridging measures through a second lockdown.

Also, damages to society from the first wave are already felt across the EU: Most significantly there is the exacerbation of inequality and increasing domestic violence as warned against by numerous EU trade union organizations.

Other changes might not be only negative, like the changing consumer behavior, the nature of work and the role of technology – both at work and at home – for us as individuals, as a workforce and as a society. Yet a new lockdown will create substantial societal consequences for the long term, including generational frictions and continued stress on people’s well-being.

We are still in the process of gauging the amount of damage that will be necessary to factor into this equation, but indications are that they are enormous.

For example, by keeping healthy children locked in we are cruelly depriving them of the in-person playtime and social interaction that are critical to their development and emotional well-being.

So the early part of the pandemic has harmed children’s health. It is not that they are dying in large numbers of the virus itself, which seems to affect them only mildly, and not only because of a growing body of evidence suggesting that lockdowns harm their mental health. It is also because life under confinement in rich countries has been making children fatter and more sedentary. A second lockdown will exacerbate the earlier effects.

While some evidence suggests that young people are faring well outside of forced schooling, with less school-induced stress and anxiety, the same research indicates that children and teens miss their friends dearly. Social isolation seems to be taking a toll. With more and more large, urban school districts planning remote-learning, the isolation is likely to continue for many children – unless parents step in to alleviate this loneliness.

For young people in education, the pandemic is likely to cause new inequalities. Many students in poorer communities lack the necessary tools to access online courses or face difficulties working at home. The consequences of these educational inequalities will disadvantage them in labor markets and further exacerbate inequality.

The best scientific evidence we have shows that children have the least to fear from COVID-19. A society that deprives children of the basic freedom of gathering to play, learn, explore and socialize does them a grave injustice, one that will result in far more harm than good. Fortunately, there is ample evidence and real-life examples that show the costs of quarantining healthy children far outweigh the benefits.

The Organization for Economic Co-operation and Development (OECD) recently issued a report detailing the global harm the pandemic response is inflicting on children’s social and economic health and well-being, especially for poor children. Its recommendation to combat these detrimental effects is to add more government interventions and mandates, particularly in social services, health care and education.

We also cannot underestimate the damage it is causing to the legitimacy of our democracies. Western democracy is based on the privacy of political democratic debate to find political solutions in view of necessary trade-offs.

The currently prevalent executive-driven decision-making in all EU member states is not acceptable and undermining the fabric of our democratic political systems.

It is crucial to return immediately to decision-making in the European Parliament based on regulations and laws approved by Parliament instead of emergency rule. This was acceptable when there were emergencies in spring, but it is no longer acceptable as a long-term governing measure.

In a democratic society, even with the best protection of individual life risks, there cannot be absolute protection against all risks of illness or accidents – otherwise, traffic on the streets should no longer be allowed because sometimes pedestrians are killed. There is always a trade-off, and in this case, it is between fundamental rights and health concerns.

So we need alternatives to living with the virus long-term until at some point maybe a vaccination is found as well as the approach we saw in spring.

First, reducing as much as possible the propagation of the virus:

It is by now evident that health administrations of the EU countries are not capable in their current state of following up propagations and breaking infection chains. This appears due to a lack of human resources and in some parts also a lack of technological infrastructure.

It is widely known that South Korea which has been battling with different kinds of infections for more than a decade, is much more successful in containing the virus through a combination of strong administrative measures, hefty fines for violations and an effective track and trace system.

EU countries have to make track and trace systems mandatory, not on the basis of executive decisions but on the basis of parliamentary approved laws. The mania of data protection gurus is important but needs to be balanced against immediate health risks.

It is evident that such a strong legal measure which would possibly force everybody to have a track and trace app on their phones at all times needs parliamentary sanctioning.

Given the already tens of thousands of deaths within the EU member states; this is, however, imperative. Such a measure needs to be time-limited and mandated in only six-month intervals that would need to be renewed. We have emergency powers for the states in emergency situations. This is one of those.

Of course, hefty fines would need to be associated with people not having track-and-trace apps on the phone when they leave the house.

At the same time, some parts of the population who still believe that all this is a joke and attend gatherings inside or outside with dozens of people need to be fined heftily. Repeat offenders should have their fines doubled each time and cars impounded. Again such strong measures need to be decided in an open debate in parliaments.

Although many issues are still unknown, the medical science now has conclusive evidence that vulnerabilities to have symptoms that are so strong that you will end up in a hospital are based on certain age groups (above 65) and preexisting conditions like chronic lung problems, heart issues or kidney issues. It is up to the medical scientists to research the remaining vulnerabilities.

Given that over 70% of infections have mild symptoms or symptoms that are not stronger than symptoms of the flu, more thinking and investment should go into how to protect the vulnerable groups. While not ideal, nothing in this trade-off is.

Until hopefully a vaccine is found and rolled out in sufficient quantities, possibly at least nine to 12 months from now, the following elements could be considered:

The most vulnerable population in all EU member states has proved to be elderly people in retirement homes. Until better solutions are found, all personnel in nursing homes caring for the elderly should be fully equipped with personal protective equipment (PPE) material in sufficient quantities, this should become mandatory for interaction with the residents.

Of course, the increasingly heavy and more uncomfortable work needs to be compensated by substantial weight hikes. While this is an additional drag on the social security systems all the other costs of a second wide-ranging lockdown are higher by several orders of magnitude.

Families who have elderly members should get health advice on how to change their daily habits in line with stronger hygiene so that the usually not more than one elderly person endangered in each family can be protected as much as possible.

Like old-style social conventions, i.e., washing your hands before meals, it should become morally imperative that you take one of the fast tests before you enter the room of your grandmother or sit down with your father who has asthma before a meal.

Health experts can surely make concrete proposals for other measures like ventilation and the use of disinfectants. At the same time, instant fast testing kits need to become widely available. States need to invest in that and make them available widely in pharmacies at a subsidized rate.

We need to learn to live with the virus in the medium- maybe even the long term, without endangering our societies, economies and our political systems.

*Political analyst based in Brussels

Political analyst based in Brussels