Somalia and the fallouts of an election deadlock 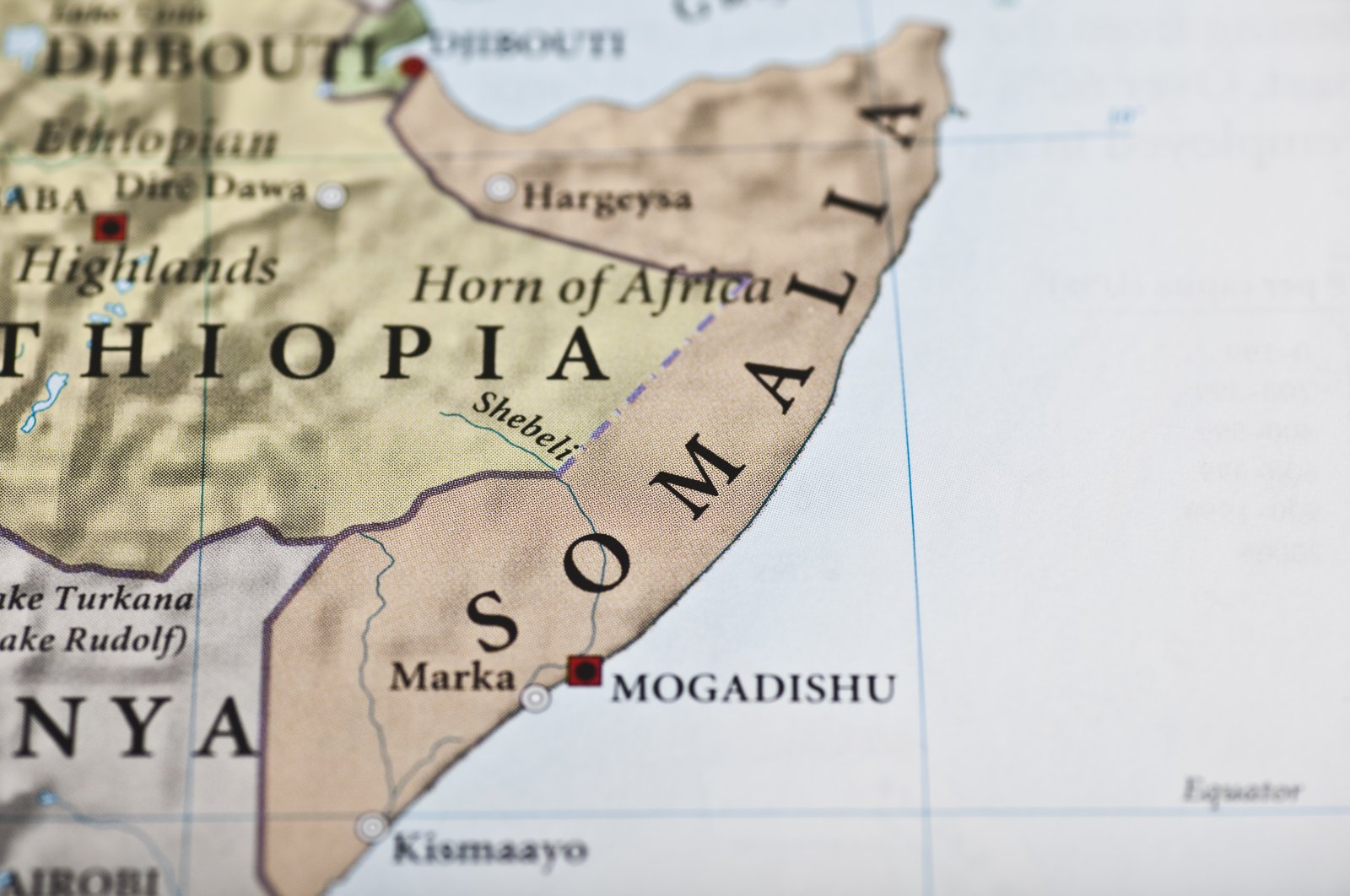 A part of a map of the African continent showing Somalia. (Photo by Getty Images)
by Abdiwali Mohamed Sayid Nov 04, 2021 12:05 am
RECOMMENDED

After nearly a year, since the end of the constitutional term of both lawmakers and the president, Somalia is grappling to conduct the long-awaited indirect elections. It was June this year when the prime minister of the Federal Government (FG) announced after an agreement he reached with the presidents of the five Federal Member States (FMS) that elections will be concluded in October – an aim that was not realized due to unrevealed causes but probably because of the reluctance of all sides to undertake the business within the agreed schedule. Given the acute polarization that has been maintained for the last four years, there is a real concern that the delay of the elections will have a malicious impact on the embryonic political and social environment. Additionally, the multifaceted ramifications of the electoral deadlock will certainly put at stake the hardly obtained modicum achievements of the last few years.

What is commendable though is that the majority of the members of the Senate have been elected by the FMS’s local legislatures in accordance with the adopted Sept. 17 electoral model. The Senate election is easier logistically than the Lower House’s expected elections and actually, it took a short time to be conducted. Although a number of seats are remaining, the process is expected to be concluded in the next few days. Obviously, the Senate election was marred by foul play – where FMS presidents pre-determined the winners of every seat – which was contrary to the agreements, the conscience and the national interest. To propel the local parliaments to elect certain candidates, the executive authorities used a carrot and stick policy by disbursing financial incentives (bribes) or threatening them if they do not follow the instructions – the strategy yielded the intended results. Alas, the Senate election has not delivered the 30% quota of women as the adopted election model stipulates.

The complaints raised by both the sidelined candidates and civil society have not been given any consideration. The fear that a probe on the flagrant electoral violations may cause a further delay to the more knotted lower house and presidential elections could be among the reasons behind the lack of legal follow-up. Also, the absence of a viable mechanism that could be used in such circumstances and the widespread public psychological fatigue toward elections created a sense of despair toward the realization of any kind of justice. Last but not least, the intention of some FMS presidents to run for the presidency of the FG or the support of each FMS president for a certain presidential candidate have complicated any attempt for a fair investigation. Paradoxically, it has not only been Somalis who have avoided taking action but also the international community kept silent and even applauded what they called “progress.”

What are the hurdles

The election of the Lower House could be considered the cornerstone of the whole process. According to the adopted model, each one of the 275 seats of the Lower House will be elected by an electoral college of 101 who will be determined through the collaboration of the FMS authorities, clan elders and civil society. It’s worth mentioning that this is the first time in which civil society will have a direct and tangible role in the Lower House’s voters selection. Although this is a tremendous step forward, the dilemma lies in the lack of the criteria through which the members of civil society and traditional elders will be selected, and this creates great concern among the public. Its widely believed that, as the FMS presidents have the upper hand in the process, the determination of both clan elders and civil society members will be exposed to politicization and manipulation.

As per the adopted model, conducting the Lower House election in two locations in each FMS is another challenge. Except Puntland, the other four FMS administrations don’t exercise full control over their territory. Al-Shabab directly and effectively administers large swathes by adjudicating disputes and extracting large amount of fees in central and southern Somalia.

In addition to that, three FMS administrations, Galmudug, Jubaland and Hirshabelle, suffer from internal cracks caused by the way the administrations were built up in the initial stages where particularistic and self-interest have overwhelmed the consensus. As a result, those regions are paying the price of the wrong policies. Hence, the compound effect of the al-Qaida-linked terrorist group al-Shabab and the internal divisions jeopardize the mission of the two elections.

Partly, the hindrances surrounding the elections are directly tied to the way political differences among the stakeholders were approached. To be sure, for the last four years the political bickering and mistrust reached unprecedented levels and have been reflected in the mainstream and social media. The struggle between the centrifugal and centripetal tendencies has manifested violently in different forms on several occasions, while the Gulf crisis that erupted in 2017 and the changes that occurred in Ethiopia and led to the alliances-reconfiguration in the Horn region has further complicated Somali politics. In addition to that, the international community’s standoffish approach to telling Somali politicians what ought to be done – though this is a positive mark for Somalia’s sovereignty – made the issue more cumbersome. Hence, the poisoned political environment has led to the zero-sum game at play.

In recent years, with the help of the international community, Somalia has achieved modest successes in state-building, particularly, in strengthening the capacity of the financial sector. Thanks to the fixation efforts, Somalia became eligible for debt relief under the Heavily Indebted Poor Countries (HIPC) scheme created by the World Bank to help the poor countries. The move of reducing Somalia’s foreign debt means that the country will have access to new financial assistance from international donors, which will contribute to poverty reduction. The financial reform is reflected in how the government maintained for the last four years the payment of the salary of its civil and security staff due to an increase in the income and reduced corruption. Actually, an unsettled electoral process or further delay will endanger those milestones and damage the little respect Somalia has gained – not to mention, the possibility that further election delay may cause the postponement or the abrogation of developmental relief Somalia is supposed to receive.

Security-wise, currently, Somalia is facing arduous challenges from al-Shabab and other threats. According to credible sources, al-Shabab has become powerful than ever before, with the organization collecting millions of dollars across the country especially in Mogadishu. The group’s revenue exceeds that of the government. Surely, the ongoing squabble among the political stakeholders over the elections bolsters those against the stability of the country from inside and outside.

The security deterioration coincides with the in-progress deliberations on the future of the African Union Mission (AMISOM) where recently the African Union (AU) endorsed a joint mission with the U.N. in Somalia. The decision came after an independent assessment team recommended a hybrid operation that will replace the current structure led by the AU. Since the current administration does not have the required legitimacy to deal with such a significant issue, it seems that it will take time before a final decision is made that necessitates an elected administration that has full legitimacy, confidence and capacity.

A prolonged period of uncertainty and heightened tensions will have a trickle-down effect on the living conditions of a lot of people. According to the humanitarian organizations as well as the Somali government, millions are on the brink of food shortages across the country. To avert the looming calamity, all political stakeholders should set the previous trivial enmities aside and put effort into realizing peaceful and transparent elections within the agreed timetable. Ensuring the success of the election process necessitates constant hard work from all parties, including the FG, FMS and civil society. Experience and consciousness dictate that further ambiguity means losing the state-building momentum that serves the interest of subversive elements, which could create unfixable negative issues in the coming years. Still, there is a chance to protect the hard-won modicum achievements by resetting the game. By utilizing the privilege they have, the international community ought to stop the passive monitoring and put real pressure on Somalia’s leaders to not only conduct elections but also to precipitate them.