Success or not: Israel's diplomatic steps in 2020 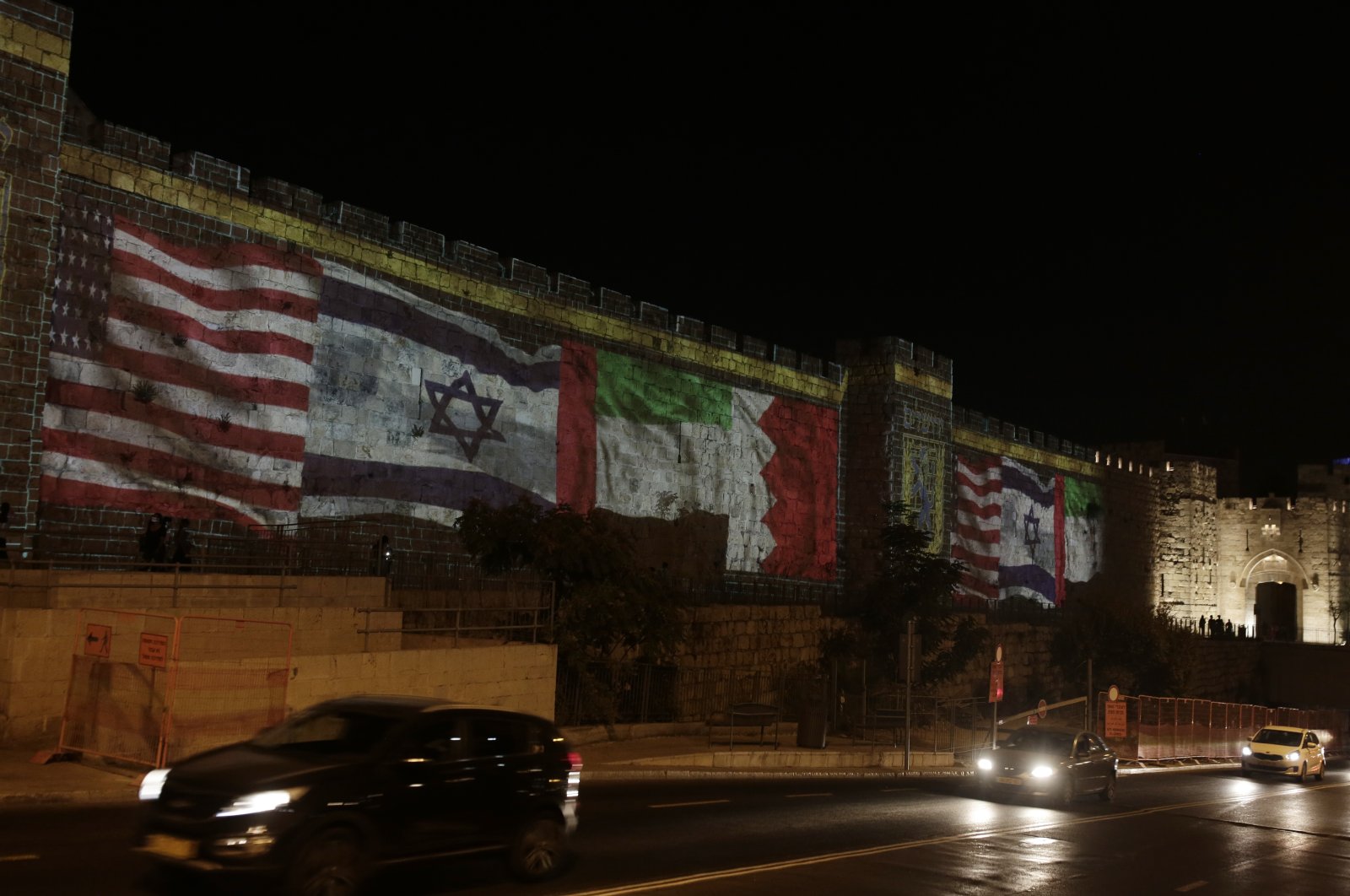 Representations of the U.S., Israeli, Emirati and Bahraini flags are projected onto a wall, marking the day of a signing ceremony in Washington signifying the two Gulf nations' normalization with Israel, Jerusalem, Sept. 15, 2020. (AP Photo)
by Fazzur Rahman Siddiqui Jan 03, 2021 11:50 pm
RECOMMENDED

In Israel's diplomatic annals, the year 2020 would perhaps be remembered as a watershed moment after the United Arab Emirates (UAE), Bahrain, Sudan and Morocco established diplomatic ties with Israel. Israel had to work hard for this new diplomatic success because it has been more than a quarter of a century since another Arab country, Jordan, established a diplomatic relationship with the Jewish state in 1993.

Many more can follow the current diplomatic trajectory as Prime Minister Benjamin Netanyahu has said more than once that many Arab countries are in line to formalize ties with Israel.

Particularly, the normalization between Israel and Sudan is seen as a great turnaround, because it was in Khartoum where the Arab leaders under the banner of the Arab League adopted the "Three Noes" in 1967: no peace with Israel, no recognition of Israel and no negotiation with Israel, following the Arab defeat in the 1967 war. Sudan is expecting to gain a lot from this new relationship, and U.S. President Donald Trump has already ordered the removal of Sudan from the list of "state sponsors of terrorism."

Trump's tenure in the White House began with a new set of policies in the region, with the objective of declaring Iran a hostile nation, bringing an end to hostilities between the Arab states and Israel and sabotaging all past pursuits of a two-state solution. Above all, one of his objectives was to resolve the Arab-Israel conflict forever by the unilateral imposition of the "Deal of the Century."

As part of his first foreign tour as the U.S. president in May 2017, Trump first visited Saudi Arabia. He singled out Iran for fueling the fire of sectarianism and called on the Gulf countries to drive out extremists and terrorists.

At a high-level meeting on the Middle East in Warsaw in February 2019, U.S. Secretary of State Mike Pompeo said the regional peace cannot be achieved without Iran.

In the Warsaw meeting, some sign of indulgence between Arab states and Israel was visible as Yemen's top diplomat was seen sitting beside Netanyahu, and there was an open embrace between Oman's top diplomat and Netanyahu as well.

Another meeting of the Arab leaders was convened by the U.S. and hosted by Bahrain in June 2019 with the objective of unveiling the economic component of the Deal of the Century.

A $50 billion economic package was announced for Palestine but was boycotted by all political factions in Palestine. Amid all these imposing and unilateral efforts, Israeli officials paid a visit to the UAE in December 2019 to sign a deal for participating in the prestigious Expo 2020 to be held in Dubai, which was later canceled due to COVID-19.

Amid years of lobbying, wooing and coercing came the Abraham Accords, which ushered in a new chapter in the history of the Israel-Arab relationship. On Sept. 15, 2020, an elaborate ceremony was held on the South Lawn of the White House to sign the historic agreement in the presence of UAE's and Bahrain's foreign ministers, Netanyahu and Trump.

By signing the agreement, both Bahrain and the UAE became the third and fourth countries, after Egypt and Jordan, to formalize diplomatic ties with Israel. The mission that had begun with the Deal of the Century ended with the Abraham Accords where the "Three Noes" from the Arab world in the past were buried.

How it began for Sudan

In recent years, no diplomatic move can be more surprising than the recognition of Israel by Sudan given their past relationship. Israel was not only among the first few nations to recognize the independence of southern Sudan but was very helpful in Sudan's division by training rebel forces.

The most desirable objective for the new regime in Sudan was its removal from the list of "states sponsoring terrorism," and Sudan's Prime Minster Abdalla Hamdok had expressed his desire more than once to have the sanction lifted.

After its successes with the UAE and Bahrain, the U.S. pressured Sudan to make its own declaration of relationship with Israel in conjunction with its negotiation for removal from the terror list.

The direct and secret negotiations between Israel and Sudan began in February 2020 when Sudan's army Gen. Abdel Fattah al-Burhan made a secret visit to Uganda and met Netanyahu where both pledged to work toward normalization.

Only two weeks after the meeting, Israeli aircraft were seen hovering over in the Sudanese air space, which had remained suspended since the 1960s. Finally, both sides made the public announcement of their relationship on Oct. 23, 2020.

However, the joint statement made no mention of the exchange of ambassadors or opening missions. The absence of any plan to open the missions seems to be due to fear of people's backlash as many already disputed the agreement itself due to the transitional nature of the regime.

While many opposition factions are against the deal, many in the government are claiming that foreign policy cannot remain hostage to the ideological conviction or desire of the group.

Immediately after the deal, Netanyahu said Israel is now changing the map of the Middle East, and now Israel is in contact with the entire world. He also termed the deal as good for the heart, finances and security of Israel.

Certainly, this deal would be a source of strategic depth for Israel, and perhaps no regional power can ignore its presence while laying down security or strategic blueprint in the larger Arab world.

For instance, Israel can now emerge as a new stakeholder in the Nile water dispute among Egypt, Sudan and Ethiopia as Israel is already supportive of Ethiopia.

The entry of Sudan in Israel's diplomatic orbit can serve the economic and military interest of Israel further and crown it as an uncontested leader in the region. With this deal, Israel has been able to remove one of the staunchest allies of Palestine in the region by winning over Sudan.

Now, Israel can complete the construction of a safety cordon in the Red Sea including Egypt, Jordan, South Sudan and Saudi Arabia. It can also control terrorist activities as well as those being hostile to its interest in areas bordering Sudan, such as Mali and Niger.

As far as Sudan is concerned, it will get rid of its past legacy, marked by decades of economic hardships and political isolation on account of the embargo imposed by the U.S. The deal is likely to bring many economic investments and become a source of political and diplomatic dividends.

According to an estimate, Sudan was paying around $1.5 billion annually to the trade intermediaries, particularly from the UAE, for its imports to evade the U.S. sanction. According to another report, lifting sanctions would relieve the country of worth $60 billion of its past debts including $3 billion of U.S. loans.

The U.S. has already promised economic aid worth $81 million to assist its humanitarian program. Many foreign companies would come to Sudan to invest in the market creating a lot of jobs and now Sudan would be eligible for loans from global institutions.

A high-level Israel delegation has already visited Sudan and held a comprehensive dialogue about cooperation in fields of agriculture, trade, commerce and aviation. Sudan could be a great beneficiary of the experience of Israeli in the field of agriculture, and Israel is world-known for its water technology, which Sudan could benefit from.

Sudan is also likely to receive major economic aid from countries like the UAE and Saudi Arabia, and there are unconfirmed reports that Saudi Arabia has paid $350 million on Sudan's behalf as compensation for victims of the bombing of the U.S. embassies in Kenya and Tanzania.

Given the temporary nature of the regime and the absence of consensus among the political factions over the deal, it is very difficult to predict anything about its success. However, there is no doubt that if implemented, it would give further diplomatic and strategic leverage to Israel in the region.

For Israel, nothing could be more beneficial to the country than more and more countries lining up to recognize it and Sudan is an important addition to it. No doubt both the countries are beneficiaries, but their nature is far from each other.

If Sudan is able to accomplish its economic and political objectives, Israel would be able to address many of its strategic, diplomatic and security concerns. Given the pace of the diplomatic trajectory in favor of Israel, one can foresee many more countries in the region declaring their intent to open up to Israel very soon, but this would come at the cost of Palestine, which seemingly has become a redundant entity for the Arab states.