Time to reset Turkey's relations with the West 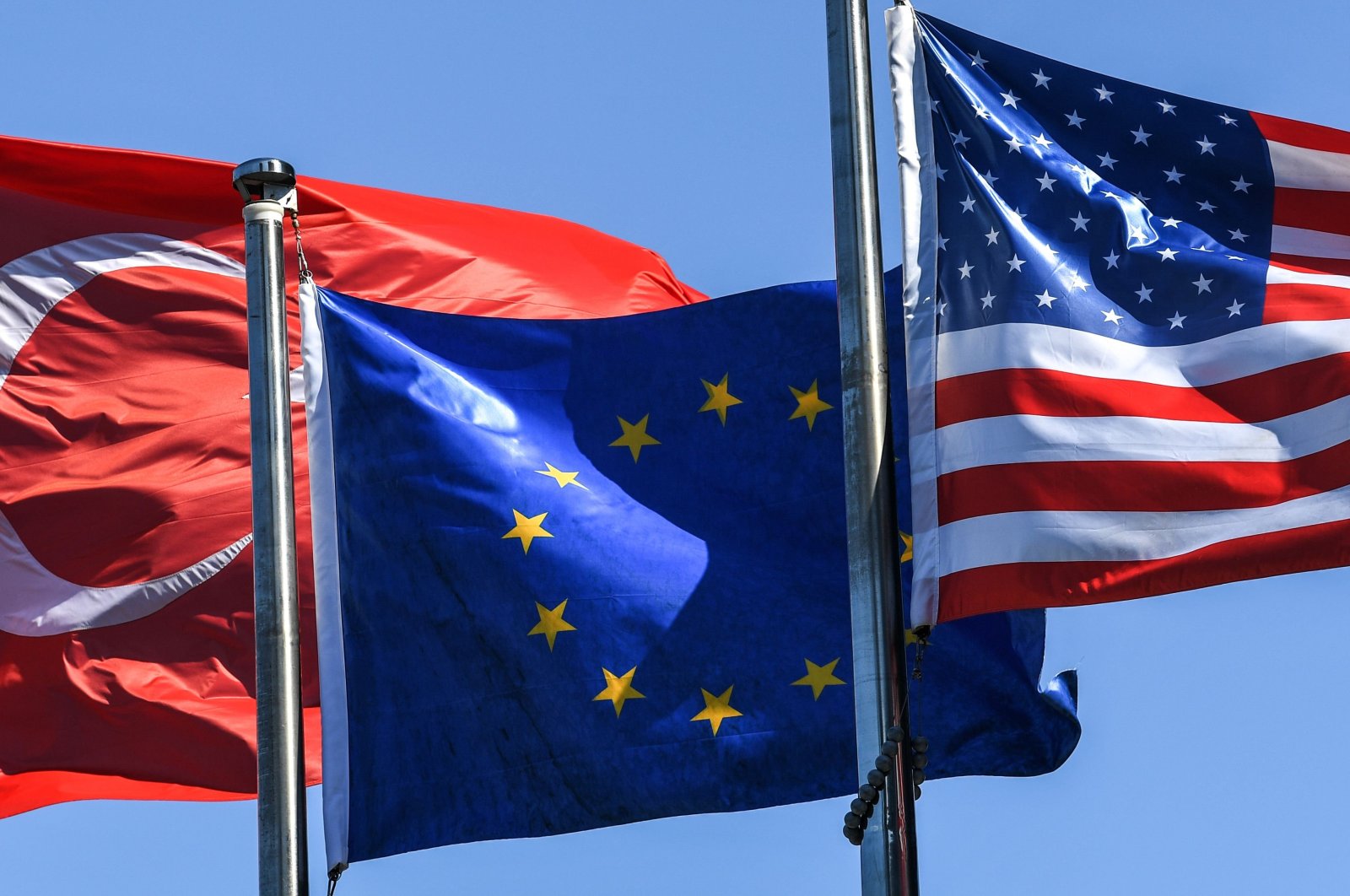 The flags of Turkey, the European Union and the United States wave in the wind in Istanbul's financial and business district Maslak, Turkey, Aug. 15, 2018. (AFP Photo)
by Tarık Oğuzlu Dec 11, 2020 12:05 am
RECOMMENDED

Turkey is a “middle power” whose choices at home and abroad will likely have a great impact on the evolving geopolitical competition between the league of democracies on one side and the league of authoritarians on the other.

Similar to swing states in the U.S., Turkey's preferences might tilt the balance between the contenders of the new Cold War to either side. Turkey is too important a country to lose to the other side.

From a historical point of view, Turkey's domestic and foreign policy orientation has always been toward the Western international community.

Starting in the 19th century and gaining pace with the establishment of the Republic of Turkey in the early 1920s, Turkey's efforts to catch up with the West and truly become a Western and European country have continued.

It was much easier for Western powers to see Turkey as a Western and European country during the Cold War era so long as the parties concerned shared similar threat perceptions and strategic considerations.

It is known that the dissolution of the Soviet Union has to a degree weakened the common strategic-security glue binding Turkey to the West. It is certain that Turkey's maneuvering capability and the incessant search for strategic autonomy have increased in recent decades as the primacy of Western powers in global politics has gradually declined in parallel to the spectacular rise and revival of such non-Western powers as China and Russia.

As unipolarity has gradually given way to multipolarity in international politics, Turkey’s ability to pursue a multidirectional and multidimensional foreign policy has also increased, and Turkey's relations with non-Western powers have incrementally developed.

As developments in non-Western locations, such as the wider Middle East, Caucasus, North Africa and the Eastern Mediterranean, have begun to affect Turkey's economic prosperity and national security more profoundly than ever, Turkish decision-makers have had to divert the bulk of their attention to such developments.

Turkey's increasing visibility in such regions, most of the time in line with its quest for strategic autonomy, has led informed observers of Turkey in the West to ask whether there has been a new direction in Turkey's international orientation away from the West.

Whether informed by systemic factors or political ideologies of ruling elites, Turkey's process of Westernization and Europeanization has at times slowed down.

While an increasing number of Westerners have in recent years drawn attention to Turkey's non-Western or non-European practices at home and abroad in such a way to delegitimize Turkey's presence in the Western international community, a growing number of Turks has begun to accuse Westerners of adopting a hypocritical attitude toward Turkey and not offering Turkey a credible European Union membership prospect.

The lack of unequivocal Western support for Turkey's ruling government on the occasion of the Gülenist Terror Group’s (FETÖ) failed coup attempt in the summer of 2016 has also fueled Western/European skepticism in Turkey and offered further ammunition to assertive nationalism in Turkish politics.

Any positivity in store?

It is now high time to open a new page in Turkey's relations with Western powers because both sides will benefit from this. More than half of Turkey's trade volume covers trade with Western countries, in particular EU members.

Turkey's financial stability and ability to attract long-term foreign direct investment depends, among many other factors, on the quality of its democracy and justice system.

Revitalizing the dormant liberal democratic reforms and adjusting its judicial standards to those of the developed Western countries will likely convince skeptical Western investors to come to Turkey for long-term investments.

Compared to Russian, Chinese and Middle Eastern sources of foreign direct investment in Turkey, the place of the West is still unrivaled. Besides, in a time of regionalization and globalization, Turkey's ability to weather future storms would likely improve if it were a part of the EU economic area.

Worth noting is that Turkey's perception as an exemplary soft power was at its peak, particularly across the wider Middle East, when the Europeanization process was in full swing at home and abroad.

One should also underline that Turkey's decadeslong process of Westernization has been first and foremost a security strategy.

The recognition of Turkey's Western, European identity has not only eliminated the possibility of Turkey being perceived as a potential threat to the West but also ensured Western commitment to Turkey's security whenever the latter perceived itself under threat from other directions.

Having cooperative relations with Turkey and easing the way for its full membership in the EU have also been in Western and European interests. Turkey sits at a very critical geographical location and it can help the West meet its long-term energy, geopolitical and societal security interests more cost-effectively.

Having Turkey under the tent would prove to be more beneficial than ostracizing it. The success of Western powers, the traditional architects of the liberal international order, in maintaining their resilience in the new Cold War environment and defeating the growing appeal of authoritarian powers would likely increase if Turkey were to be placed in the Western camp.

Despite the fact that Turkey has in recent years come closer to Russia and China than ever, neither of these countries appear to be seen as normative powers in Turkish eyes. Turkey looks neither to Russia nor China from a normative perspective.

They do not have soft power in Turkish eyes. Turkey's recent strategic collaboration with Russia and China should not be seen by the West as an indication of Turkey's willingness to be a part of the league of authoritarians.

High-level Turkish decision-makers have made it undoubtedly clear that neither the Shanghai Cooperation Organization (SCO) nor the Eurasian Economic Union (EAEU) nor Turkey's involvement in the Belt and Road Initiative (BRI) can be seen as credible alternatives to Turkey's decades-old institutionalized relations with NATO and the EU.

Securing Turkey's cooperation will also matter in the context of the efforts of the incoming Joe Biden administration in the U.S. to help revitalize multilateralism in global governance and decrease the burdens of global leadership.

A stable, liberal-democratic and powerful Turkey will not only help EU members cope with all kinds of security challenges emanating from the wider Middle East and Eastern Mediterranean regions but also enable the U.S. to shift its strategic attention and dwindling resources more comfortably to the Indo-Pacific region.

It is clear that the prospects of Turkey's full membership in the EU are still low. The struggle against the COVID-19 pandemic and the rise of far-right populist leaders across Europe do not offer a suitable environment for Turkey's membership.

On the other hand, the rise of survival-centric politics in the aftermath of the failed coup attempt seems to have eroded the appeal of the EU membership project in Turkey.

It is also the case that Turkish-American relations have in recent years been tested by many near-crisis situations, including Turkey's purchase of S-400 missiles from Russia, the U.S.' reluctance to extradite FETÖ leader Fetullah Gülen to Turkey, American support to PKK-linked terrorist elements in northern Syria, Turkey's exclusion from the F-35 project and U.S. President Donald Trump's erratic behavior toward Turkey.

Now, there is a strategic opportunity for Turkey and Western powers not to miss. They should take it up and redefine their relations more cooperatively and amicably than before. The sooner they do, the better.