Trump's burden to Biden: US support of Israel's illegal activities 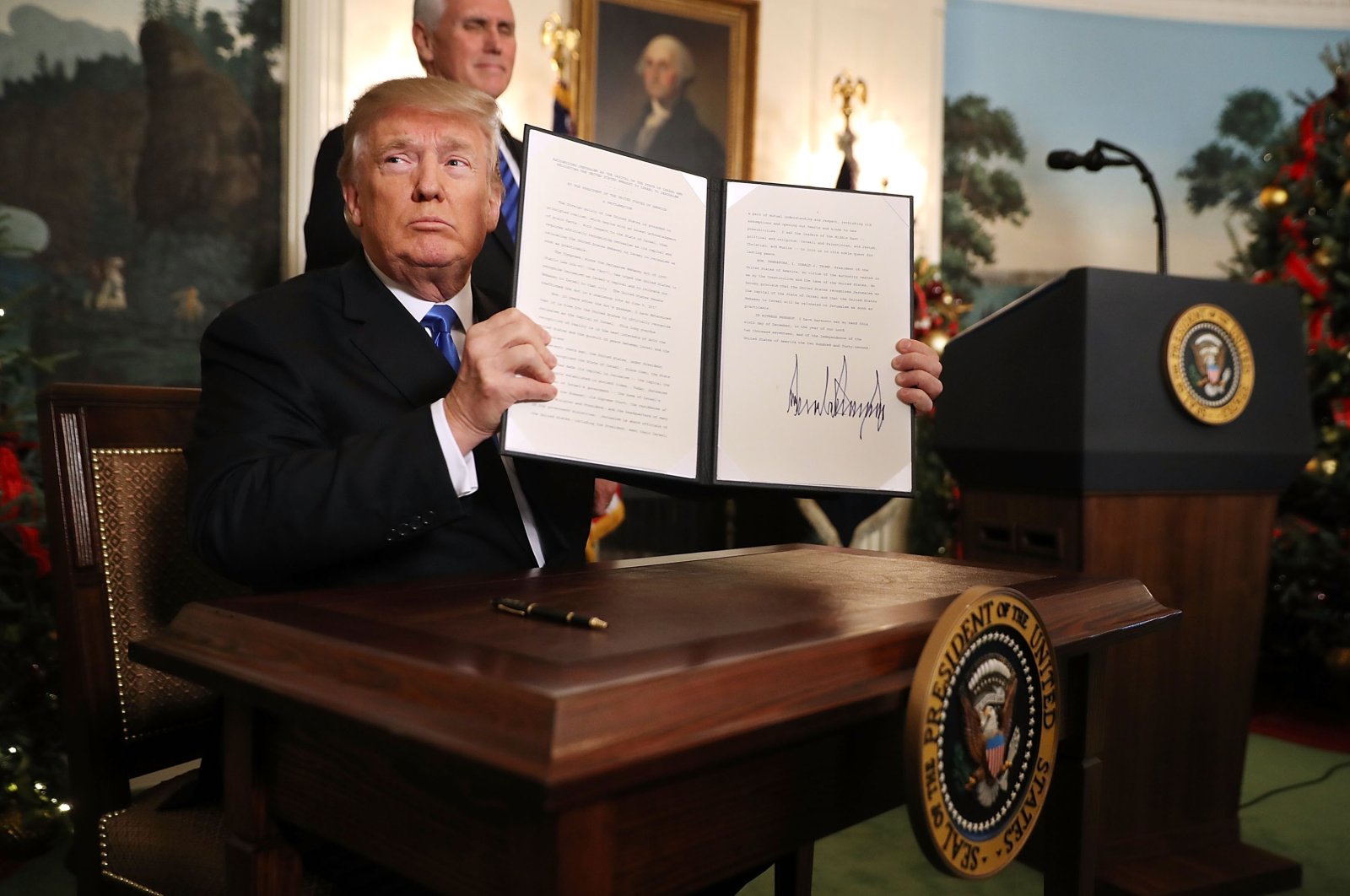 U.S. President Donald Trump holds up a controversial proclamation that the U.S. will formally recognize Jerusalem as the capital of Israel after signing the document at the White House, Washington, D.C., Dec. 6, 2017. (Photo by Getty Images)
by Najla M. Shahwan Nov 18, 2020 12:05 am
RECOMMENDED

The United States' unlimited support for Israel has been viewed for decades as an obstacle in resolving the Israeli-Palestinian conflict and Washington's acceptance of Tel Aviv's repression of occupied territories has also been a controversial issue among the international community for many years.

From shared strategic goals in the Middle East to the political influence of American Jews and evangelical Christians, there are many factors behind the strong U.S.-Israel friendship. For example, Americans believe that Israel is the only democratic country in the Middle East although Tel Aviv has strayed from those shared values, especially in its occupation of Palestine.

Israel is a leading recipient of U.S. foreign aid and a frequent purchaser of American weapons. By law, U.S. arms sales cannot adversely affect Israel's "qualitative military edge" over other countries in its region.

Israel receives on average about $3.1 billion in foreign aid from the U.S. each year and is the only recipient of U.S. economic aid that does not have to account for how it is spent.

In September 2016, the U.S. approved a record military aid package to Israel worth $38 billion over a 10-year period. According to the U.S. Congress' public policy research institute Congressional Research Service, "U.S. military aid has helped transform Israel's armed forces into one of the most technologically sophisticated militaries in the world."

After Tel Aviv occupied the Gaza Strip, the West Bank and East Jerusalem, the U.S.' unwavering support for Israel grew while the latter's subsequent aggression toward Palestinians living in what came to be known as the occupied territories systematically became more violent.

Not behind the curtain

Washington has shown a bias toward Tel Aviv in the Israeli-Palestinian conflict, in its policies, in preferential arms sales and its voting record in the United Nations.

More specifically, the U.S. has not demonstrated significant support in the U.N. for Palestinians affected by Israel's human rights abuses.

America's support for Israel has added harm to the Israeli-Palestinian conflict, as it has encouraged Israel to take more aggressive measures against the Palestinians, including demolishing homes and annexing more lands.

The special relationship transcends any specific American administration or Israeli government and thus ensures continuity and stability. Yet, several U.S. presidents have adopted fundamentally different approaches to Tel Aviv. Ronald Reagan, Bill Clinton and Donald Trump each had a sentimental connection to Israel and were considered very pro-Israel, while Barack Obama and Jimmy Carter did not possess such sentiments and were thought of as unfriendly.

During Trump's presidency, U.S.-Israel relations were arguably closer than at any point in history.

In terms of diplomatic support for Israel, the U.S. has vetoed 44 U.N. Security Council resolutions critical of Israel since 1972. Much of the international community's displeasure with Washington's support for Tel Aviv stems from the U.S. routinely backing Israel whenever the U.N. General Assembly passes one of the many resolutions condemning Israeli behavior or calling for action on behalf of the Palestinians.

According to the General Assembly, the Israelis have committed human rights abuses against Palestinians in the occupied territories following the Six-Day War in 1967.

As most of the international community considers both territories to be occupied and the settlements to be illegal, the Trump administration, in a break from its predecessors and much of the rest of the world, has taken a much friendlier approach and, in November 2019, Trump declared he does not consider the settlements illegal.

After a slowdown in settlement activity during the final years of the Obama administration, Israel has stepped up its plans for construction since Trump took office. Both settlers and their supporters call this the "Trump effect" and they have planned for a jump in construction as long as he is in office.

According to the watchdog group Peace Now, Israel in 2019 pushed forward plans to build 9,413 settlement homes, roughly the same levels as 2017 and 2018. The figures are more than triple the level of settlement planning during the final two years of the Obama administration.

While world leaders speak with one voice in condemning the expansion of Israeli settlements, illegal under international law, Tel Aviv continues to defy the international community, creating ever greater difficulties for the Palestinian population. It threatens a just and durable solution to the conflict and, on its behalf, the U.S. has failed to put meaningful pressure on Israel to stop its settlement expansion.

Trump also rejected Obama's claim that Israeli settlements in the West Bank are illegal and he was upset by a Security Council resolution the former president initiated in December 2016, when Trump was already president-elect.

The U.N. resolution (2334) stated that Israel's settlement activity constituted a "flagrant violation" of international law and had "no legal validity."

On Nov. 18, 2019, U.S. Secretary of State Mike Pompeo declared that "the establishment of Israeli civilian settlements in the West Bank is not, per se, inconsistent with international law."

The best friend ever

In August 2019, Trump declared himself "history's most pro-Israel U.S. president." In January 2020, Israeli Prime Minister Benjamin Netanyahu described Trump as "the best friend Israel has ever had in the White House."

In December 2017, before finishing his first year in office, Trump signed a proclamation saying the U.S. sees Jerusalem as Israel's capital, directing the U.S. State Department to start planning an embassy in the city.

Fast forward to March 2019, just two weeks before a critical Israeli election, Trump took a similar step by signing a proclamation that made the U.S. the first country to recognize Israel's sovereignty over the Golan Heights, the strategic plateau it captured from Syria in 1967 and annexed in 1981.

Trump has taken other actions that specifically deprived Palestinian programs and governmental institutions of funding and resources.

In 2017, the administration closed the Palestine Liberalization Organization (PLO) office in Washington and closed its own diplomatic mission to the Palestinians in Jerusalem in 2019, folding that office's functions into the new Jerusalem embassy.

In 2018, Trump reduced and eliminated a range of ways in which it gave financial assistance to the Palestinians. He stopped funding to the United Nations Relief and Works Agency (UNRWA) that handles Palestinian refugees and their descendants and cut an additional $200 million from foreign aid to Palestinians. His government also eliminated $10 million in funding for Israeli-Palestinian coexistence programs.

On Jan. 28, Trump released his administration's Israeli-Palestinian peace plan. Several presidents before Trump had attempted to achieve peace in the region, but his efforts differed from earlier plans in two ways: It did not endorse a fully independent Palestinian state and was released in coordination with Israel only, without any backing from the Palestinian National Authority (PNA).

Like previous Trump actions, the plan was seen as a boon for Tel Aviv's right-wing government as it did not require the dismantling of any Israeli settlements in the West Bank and envisioned full Israeli security control over the entire territory, meaning that the Israel Defense Forces would still have the freedom to move within all Palestinian areas as they pleased.

The Palestinian state it envisioned was a patchwork of areas comprising some 80% of the West Bank and it was vehemently rejected by the Palestinian leadership.

The announcement of the plan, at a news conference with Netanyahu, came a couple of months after the Trump administration said it would no longer view West Bank settlements as illegal.

In the wake of the plan's release, Netanyahu said he would continue to annex areas of the West Bank but would delay doing so, saying he would prefer to wait for a green light from Washington. Settlement construction in the West Bank, however, never stopped.

In an interview with the bilingual, U.S.-based Arab American News three days before the election, Vice President-elect Kamala Harris signaled that their team will repair ties with Palestinians and back the two-state solution.

Harris said the Biden administration would take immediate steps to restore economic and humanitarian assistance to the Palestinians and that, if elected, they would attempt to address the humanitarian crisis in Gaza and reopen the U.S. consulate in East Jerusalem and the PLO mission in Washington.

"Joe and I also believe in the worth and value of every Palestinian and every Israeli, and we will work to ensure that Palestinians and Israelis enjoy equal measures of freedom, security, prosperity and democracy," Harris had highlighted.

All of Palestine is now watching Biden and his team. The Israeli-Palestinian conflict and America's ties with the warring sides will be a great challenge for the next president but the Palestinians' sole demand of him is to support democracy and freedom, and not to back Israel's illegal behaviors in the region.