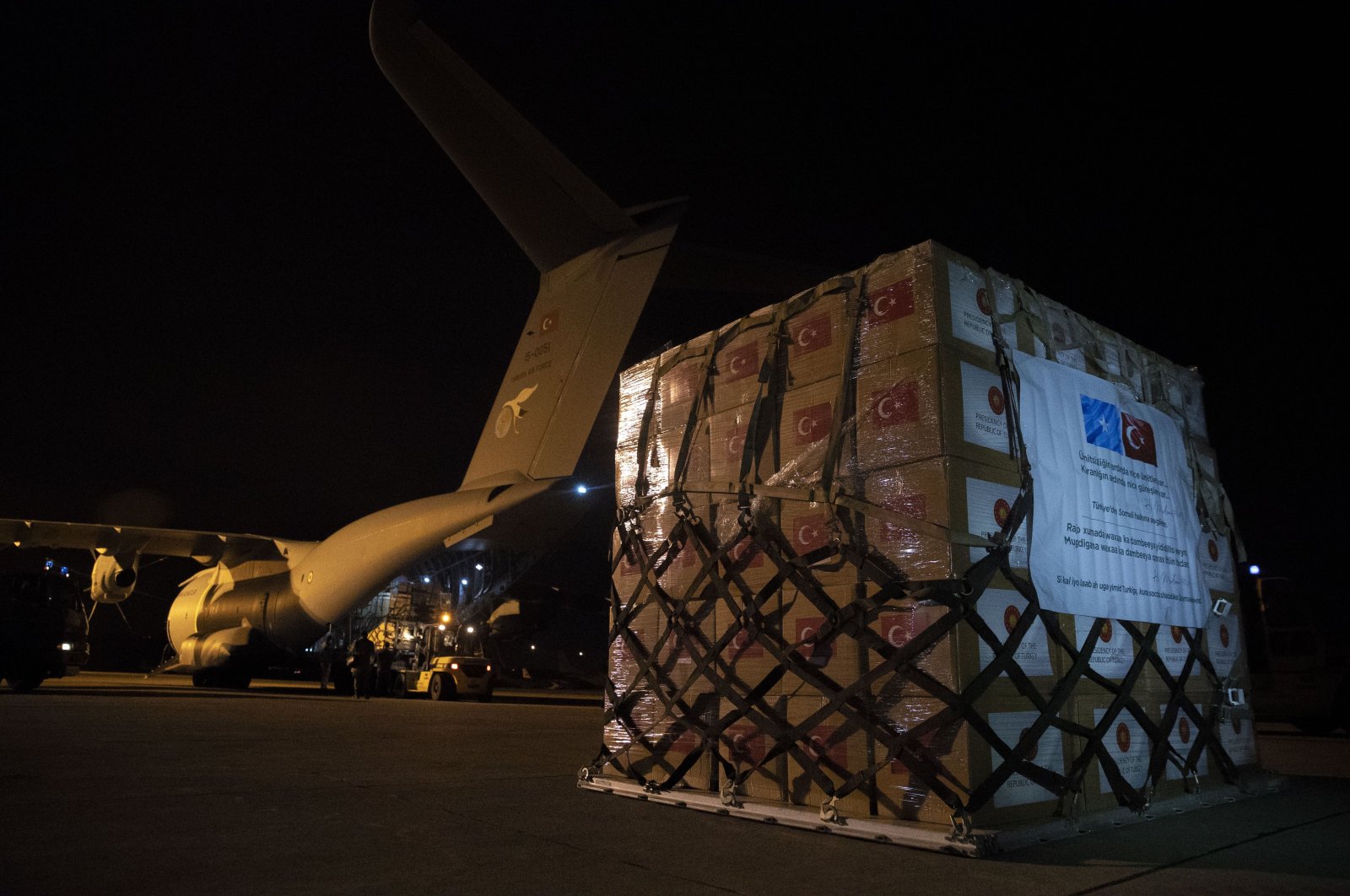 A Turkish military cargo plane with medical supplies and protective equipment to combat COVID-19 in Somalia is loaded at an airport in Ankara, Turkey, May 3, 2020. (AA Photo)
by Umut Çağrı Sarı May 08, 2020 12:05 am
RECOMMENDED

The COVID-19 virus, which appeared in Wuhan, China in late December, began affecting Africa, as well as the rest of the world, in March. Caught unprepared for a pandemic, African leaders found their solutions in humanitarian aid and limited domestic production. During the crisis, Turkey is among the countries sending medical supplies to African countries. With its strong health system and experience, it is expected by experts to survive the pandemic with minimal damage. Since developed countries remain in a dogfight against the outbreak, will African nations' relations with Turkey after the crisis enter a new period?

The coronavirus outbreak has been growing in Africa since early March. The developing situation on the continent, where the economy, production sector and health system are weak, is followed closely all over the world.

Yes, coronavirus poses a great threat to Africa, not only to the health of its citizens, but also to its economies. With the spread of the virus, aviation, supply chain, production and agriculture have suffered greatly in Africa.

For countries such as the U.S., China, England, Italy and Spain, which are thought to have the most developed economies and most advanced health systems in the world, the pandemic is a major health crisis. The virus, which threatens these countries with the collapse of their economies and health systems, has become a major fear factor for Africa too.

In fact, the desperation of developed countries caused great surprise in Africa. Europe and the U.S., the first destination in health and education for Africans, have largely undermined trust among the continents' people with the collapse of their health systems.

Developed countries have experienced hundreds of thousands of infections and lead the world in deaths. Turkey, on the other hand, has been successful in controlling its cases and growing its recovery rate. This has not escaped Africa's political attention.

Turkey’s significant investments in the health sector since 2002 has yielded positive results in today’s pandemic crisis, showing the best way to deal with the outbreak. Before 2002, when Turkey’s investments were not present, the African health system was not quite insufficient, but it is now capable of tackling the pandemic. Turkey’s investments within this 18-year period can greatly help the continent. In a very short period of time, Africa could also build a strong heath care system and Turkey’s transfer of experience can obviously play a large role in it.

President Recep Tayyip Erdoğan has talked with close to 10 African leaders since the start of the pandemic, as Turkey's coronavirus assistance to 55 countries is of great importance. Of those, 20 are African, and Turkey attaches great importance to its relations with the continent's nations. Again, coronavirus diplomacy played a major role in developing relations with Ethiopia, one of the most important countries in Africa. Ethiopian Prime Minister Abiy Ahmed, who took office two years ago, wants stable relations with Turkey despite their lack of a high-level contacts. Ahmed met for the first time on the phone with Erdoğan, and the two leaders decided to cooperate against the coronavirus. Turkey also sent humanitarian aid to Somalia, Djibouti and even the small southern African country of Lesotho to help relieve these nation's economic difficulties.

After the coronavirus, we will see that Africa learned great lessons during the pandemic. The most important of these is their understanding of the importance of investment in health systems and domestic production. In the period after the pandemic in Africa, there should be quite a significant transfer of experience in the health field from Turkey. India's health field is popular and in demand by European countries, while Turkey will launch post-pandemic diplomatic attacks on the continent of Africa. This will be a win-win for Turkey and African countries as the country gains health tourism and the continent gains shared experience and information.

It is inevitable that this health field cooperation will also affect medical production and trade. Turkey's experience in medical equipment manufacturing and creating world-class products will increase its health supplies trade with Africa.

Since the health systems of developed countries have shown to be inadequate during the pandemic, and their inability to provide health services to foreign citizens has created big question marks in the minds of Africans, students and their parents will rethink their educational location preferences. During the pandemic, many citizens of the world have benefited from Turkey's health services, and Africa's youth have noticed. In this sense, more of the continents young people will choose Turkey for their university programs as it promises all foreign students a quality education and high standard of living.

Developments during the coronavirus period indicate that the world will enter a new era after the pandemic, and many things will not remain the same. Turkey will be one of the main actors in this process of change as it has already demonstrated it is managing well. In the period after the virus, Turkey's diplomatic offensive, that began with 42 embassies on the continent, will accelerate the momentum of good relations with Africa's nations.

*Journalist based in Addis Ababa, Ethiopia