Turkey’s struggle in the center of hypocrite allies 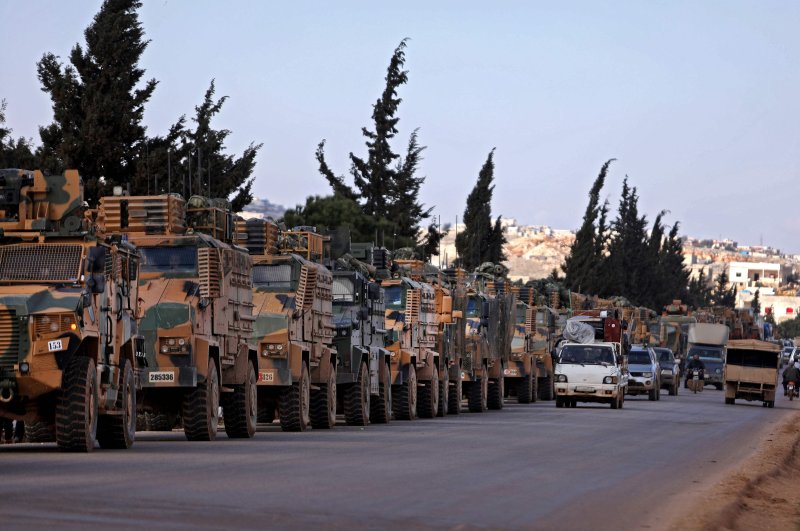 A Turkish military convoy is seen parked near the town of Batabu on the highway linking Idlib to the Syrian Bab al-Hawa border crossing with Turkey, March 2, 2020. (AFP Photo)
by Muhammet Ali Güler Mar 05, 2020 12:05 am

The threat of terrorism is at the core of Turkey's focus in cross-border offensives on the Syrian border. Western accusations regarding other motivations are simply fake

Turkey, despite its policies, decisions, initiatives and operations, which have included liberating parts of Syria, has had to endure unfair attacks from around the world. This is in addition to attacks against Turkish legal drilling activities in the Mediterranean Sea and the refugee crises. One can only imagine what would happen upon discovering that an ally met with a threat to the nation. In this instance, it was Americans – who are supposedly Turkish allies – led by U.S. President Donald Trump met with one of its great enemies: Ferhat Abdi Şahin, code-named "Mazloum Kobani," the protege of Abdullah Öcalan, the founder of the PKK terrorist organization.

The Syrian issue and the PKK

Turkey’s primary aim in executing Operation Spring Shield is to create a safe zone within the Syrian side of the border. It is crucial to understand Turkey’s reasons for intervening in Syria; the first being to preserve the territorial integrity of Syria, followed by alleviating security concerns due to terrorist groups such as Daesh, and the YPG/PKK. Turkey has cleared over 4,000 square kilometers of land formerly held by these terrorist groups. As a result, there have been Syrians who managed to return to these areas to build a new life for themselves.

Turkey is also prepared to develop settlements as well as restore existing towns and cities liberated from terrorists by building homes, hospitals and schools. For instance, new settlements have been built in three districts consisting of 63 villages for over 400,000 people between Tal Abyad and Ras al-Ayn. In addition to this, there have also been six other districts consisting of 70 villages built for over 5,000 people between the same areas. In total, Turkey has spent over $40 billion on Syrian refugees.

Turkey has suffered due to the actions of these terrorist groups. Daesh has launched suicide bombings, car bombings and other terrorist attacks that have caused injuries in the thousands and hundreds of deaths. According to a Turkish daily, about 8,000 Daesh terrorists have been deported by Turkey to their own countries, with approximately another 1,500 Daesh members languishing in Turkish prisons. According to Anadolu Agency (AA), anti-terror operations in Turkey from the beginning of 2019 led to approximately 3,000 Daesh terrorists either neutralized or arrested, with another 7,000 members captured or killed. In addition to this, nearly 1,000 mines and 2,000 improvised explosives have been destroyed by Turkish forces in Syria.

Feb. 10 and Feb. 27 saw attacks on Turkish soldiers by the Assad regime, which killed 36 Turkish soldiers and left several wounded. The Assad regime should be made to understand that Syria and its neighbors will not be able to see any form of security in the region in the nearby future. Thus, the Assad regime should view Turkey’s protective and preventive operations as something that is constructive instead of the other way round. Turkey and Syria should have direct talks about protecting the territorial integrity of Syria. If the countries are unable to take any action, more turmoil and chaos will follow. As a result, external policymakers will step in to take advantage of the situation for their own benefit.

James Jeffrey, the U.S. special envoy for Syria, paid a visit to Turkey on Tuesday and accused the Syrian regime and Russia of attacking Turkish soldiers. At the same time, allies have left Turkey alone in its fight with PKK-affiliated groups in Syria while some allies, such as the U.S., have been arming the YPG/PKK. If Turkey could get sufficient and non-discriminatory backup from NATO, Ankara would be able to push back Syrian forces to their country. Then, Turkey and the allies would be in an equal position to discuss the future of Syria. This would ease the return of Syrians who are currently refugees and being hosted in countries around the world.

For over three decades, the PKK fought against Turkey. It was during this time that the organization was listed as a terrorist group by both the U.S. and the European Union. The PKK is responsible for the murders of thousands of innocent civilians and the displacement of millions more. In regard to Jeffrey’s visit to Turkey, we demand the U.S. take concrete steps in stopping the PKK-affiliated groups in the region. We demand that the U.S. stops telling stories and announcing iridescent policies about security-related issues to Turkey.

He should give a strongly worded briefing to President Donald Trump in regard to the security threats faced by the region. It should be understood that Turkey has a right to protect its citizens inside and outside of Turkey in line with international rules. And Turkey’s ultimate goal is to eliminate all terrorists in the region. In this regard, when it comes to fighting terrorists, Turkey will work together with some Kurdish and Arab tribes as it has done in the past. Turkey, along with both NATO and non-NATO countries, is willing to initiate comprehensive military operations in cooperation with both Iran and Iraq. If NATO allies are able to participate, then relations between the U.S. and Turkey will see a period of time where trust and bilateral ties would be repaired and strengthened. In other words, in the ever-changing and evolving field of global politics, the West must change its traditional hypocritical stance toward Turkey. The world powers will find it best to have stronger and tighter relations with regional powers.

It has been over a hundred days since the beginning of a sit-in protest by Kurdish mothers in Diyarbakır. The aim of these peaceful protests by the mothers is to demand the return of children forcibly recruited by the PKK. These mothers have been protesting outside the provincial office of the Peoples’ Democratic Party (HDP) due to its links with the PKK. Moreover, the regional government of the Kurds in Iraq refuted the international claim that Turkey is fighting Kurdish people. It said that Ankara's battle is with the PKK and other sister branches and not against Kurdish people; instead, they are fighting against terrorism.

According to Interior Minister Süleyman Soylu, the number of tourists to the East and southeast regions of Turkey increased by about 200%. This was primarily due to a decrease in terrorist incidents in the region. It can be said that terrorists and the enemies of Turkey do not want peace, stability and safety in the region; they would rather have chaos instead.

Turkey has undertaken the responsibility of fighting against terrorists both inside and outside its borders.

Turkey has already warned the YPG, a branch of the PKK currently occupying several Syrian cities, that they must withdraw and make way for native Syrians returning home. In this way, Turkey is doing everything it could to restore the region for 2 million Syrians.

President Recep Tayyip Erdoğan and other high-ranking government officials such as Vice President Fuat Oktay and Defense Minister Hulusi Akar have reiterated that Turkey will never stop fighting terrorism at home and in the region. This determination is exemplified in remarks such as those by Oktay, who said that: "Turkey’s fight against terrorism in the region will continue until the terrorists in the area are completely removed.”

TRT Arabic and TRT Kurdish are well-reputed Turkish-owned channels for the people in the region. On Dec. 9, in a joint broadcast of TRT World, TRT Arabic, TRT Kurdish, TRT, and other national TV channels, Erdoğan talked about Turkey’s aims for the latest operation in Syria. Through these channels, Turkey refuted claims made by some Western media platforms.

Some Western media outlets blame Turkey for ongoing operations in Syria. They propagate stories that the Turkish people are against Kurds and that all Kurdish people have a connection with the PKK/YPG. In addition, many outlets talk of the use of chemical weapons by the Turkish army in Syria. In addition, Western media has been known to push provocative news designed to force Russians, Americans and Kurds against Turkey. It should be established is that Turkey’s fight is against terrorism, not any ethnicity or country.