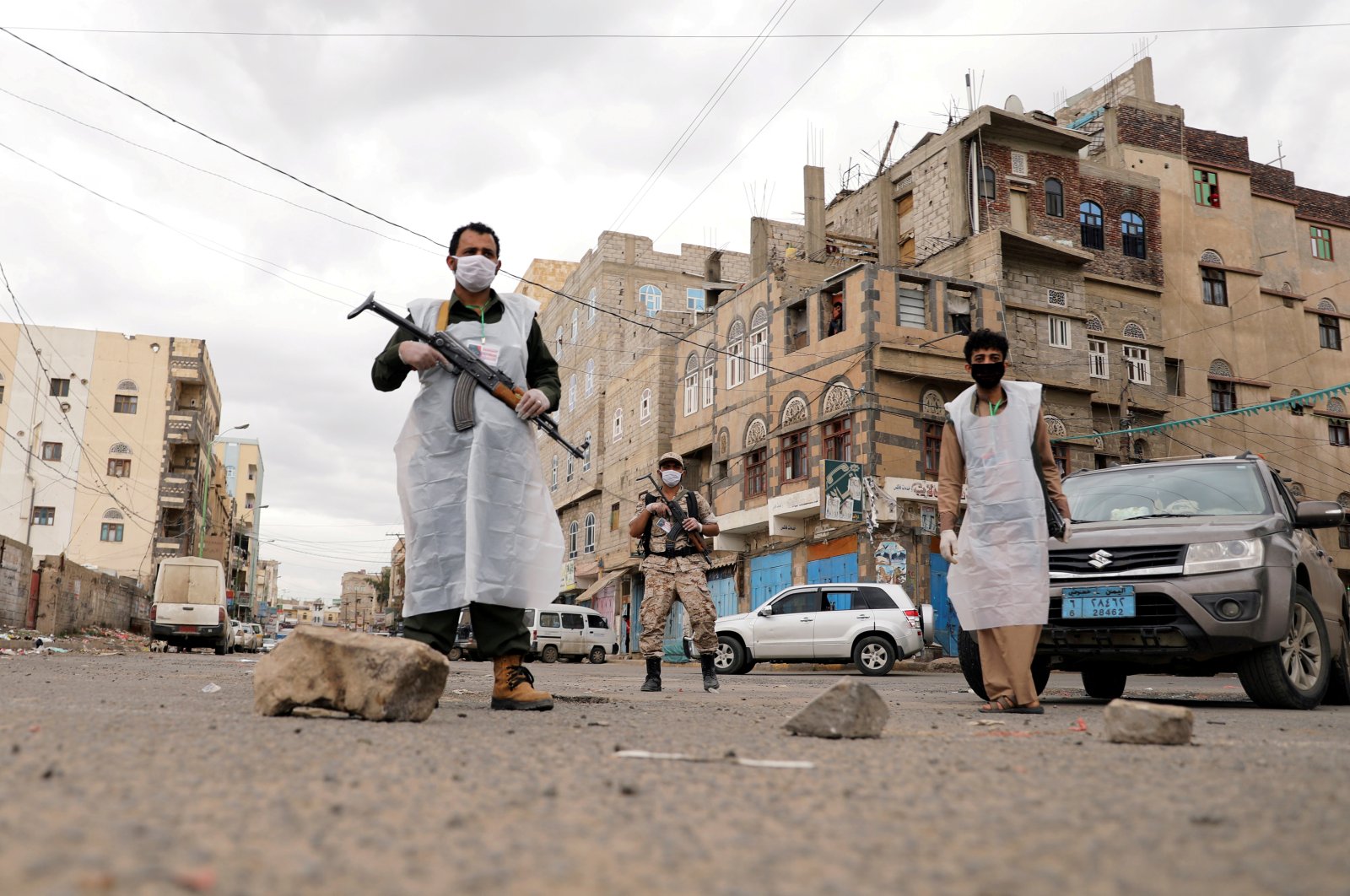 Security men wearing protective masks stand on a street during a 24-hour curfew amid concerns about the spread of the coronavirus, Sanaa, Yemen, May 6, 2020. (Reuters Photo)
by Gökhan Ereli Jun 16, 2020 12:05 am
RECOMMENDED

The last few months have seen the exacerbating of military clashes between President Abed Rabbo Mansour Hadi’s legitimate government and the United Arab Emirates-supported separatist group, the Southern Transitional Council (STC), in Yemen. The military confrontations scaled up between the warring parties particularly after the STC declared self-rule in the southern governorates on April 26. Ultimately, the Hadi government’s preoccupation with the STC necessarily weakens the government’s capacity to fight the Houthi militia in the North.

The relentless protagonist in supporting the STC in Yemen has been the UAE, which has been financially, militarily and politically assisting the council after assuming the lion’s share in its foundation in 2017 under the leadership of former Aden Governor Aidarus Al Zubaidi. The penetration of the STC in the southern governorates has helped the UAE in its overall Yemen strategy, particularly proving useful in the face of the UAE’s military drawdown in June 2019 and the complete military withdrawal in February 2020.

Yet despite the reduction in the number of troops and the complete military withdrawal, the UAE activities in Yemen have continued to overshadow the political resolution efforts, worsening the military situation on the ground. Emboldened by the UAE’s support as well as the impasse in which the Hadi government finds itself in the presence of mounting Houthi threats toward the Ma’rib governorate, the STC has over the last months made serious efforts to consolidate its power in the southern governorates. Along with the natural disasters hitting Yemen, a cholera outbreak and COVID-19 with its terrifying implications helped the STC in portraying itself as a public service provider.

Recent developments in the southern governorates have added clarity as to what the UAE is trying to achieve through the STC. It is now more evident that the UAE – by supporting a bunch of separatists – undermines the credibility of the Hadi government and tries to shatter Yemen’s already diminished territorial integrity.

What is interesting is that the Hadi government officials have recently found out that the UAE-supported STC is in cooperation with former President Ali Abdullah Saleh’s followers. Particularly in the Abyan governorate, where clashes have intensified recently owing to the cutting out of the Aden-Abyan-Hadramawt route, the cooperation between Brig. Gen. Tareq Saleh, a nephew of Saleh, and the STC figures becomes evident. This would mean that the UAE is trying to bring together nearly all the actors that it has been backing. What is bizarre is the intensity of the shifting of alliances given that Saleh was killed by Houthi militias in 2017 on the charges of making secret plans to shoot Houthi militia from behind.

The clashes between the Hadi government and the STC have been taking place in and around the Abyan governorate particularly after the STC’s self-rule decision. This fact tells us that the STC has not steered away from its anti-government position in August 2019, when it seized the presidential palace and some other governmental institutions in Aden. Just as it happened after the “Aden coup” in 2019, the Abyan governorate, Shabwa, and Zinjibar province have been the victims of the UAE-supported STC all over again.

Abyan may be one of the most affected governorates in these clashes; however, it is not the only one. With the UAE’s support, the STC has made several attempts to control the island but faced growing backlash on the side of the people of Socotra. The latest of these reactions came in early June when the people of Socotra held a demonstration against the STC and its primary supporter UAE. The people of Socotra demanded that the UAE and STC withdraw their troops and militias from the island, and the allegiance of the Socotra people to the legitimate government of Yemen also has been repeatedly echoed.

Fight against the Houthis

The STC’s deviation from the Riyadh Agreement and its fight against the Hadi government is endangering the legitimate government’s capability to fight the Houthi militia in the North. For nearly three months, the Houthi militia has been making reinforcements toward the Ma’rib governorate, especially after taking control of the al-Jawf governorate. Even though the Hadi government has made advances toward the Nehm province in the east of Sanaa as well as in al-Hazm, the capital of the al Jawf governorates, these advances do not secure the Ma’rib governorate wholly.

Toward the end of May, the Houthi militia targeted the headquarters of the Ministry of Defense and the Armed Forces of Yemen, in the north of Ma’rib governorate. A Houthi missile attack targeted Defense Minister Mohammad Ali Al-Maqdashi and Chief of Staff Sagheer bin Aziz. However, both survived the attack. The targeting of such figures by the Houthi militia has demonstrated that the Ma’rib offensive will continue until the Hadi government secures a decisive victory against the Houthi militia. In their offensives elsewhere, the Houthi militia also targeted a civil bus in Taiz city in the southwest of Sanaa and residential areas in Hodeida.