Understanding the bigger picture: What does Idlib stand for? 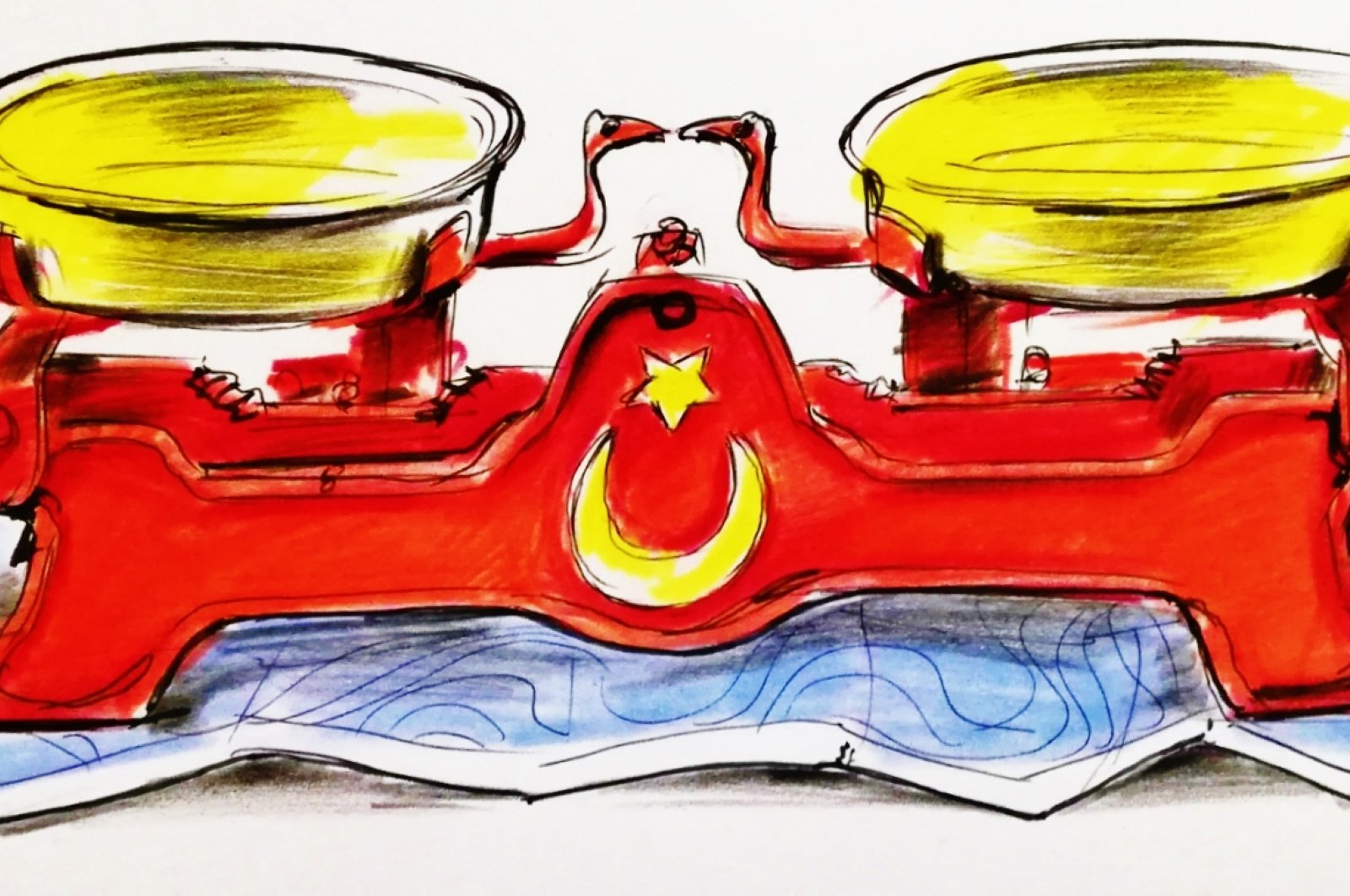 Turkey is not pursuing Neo-Ottomanism in Syria or the region, but merely intends to protect its national security, while the West pursues colonization and imperialism

Before the coronavirus crisis broke out, the international media landscape had been dominated by pictures of mistreated refugees on the Turkish-Greek border and news of Bashar Assad regime attacks on Turkish soldiers in Idlib, Syria. In view of the local political events of recent weeks, an escalation of the situation and a humanitarian catastrophe as well as a renewed refugee crisis were foreseeable, but the uninterested West did not react anyway. At the center of the conflict are the power shifts in the Eastern Mediterranean and the political reorganization of the region, in which Turkey, despite all efforts to stop it, has developed economically and politically over the last 18 years and has achieved a dominant position in the Middle East, be it in the military sphere, in terms of technical progress, in geopolitical representation or in balanced energy policy.

For years, by ignoring or deliberately undervaluing all real political facts in order to discredit it in the international arena within the framework of false perception, Turkey has been accused of pursuing a Neo-Ottomanism strategy and that it is trying to extend its borders by establishing a (temporary) buffer zone in northern Syria. The real situation is different: After the 2011 Arab Spring and the ensuing civil war in Syria, Turkey was at the mercy of several threats and attacks by terrorist organizations at its southern border and was therefore confronted with new foreign, security and domestic policy challenges, making a buffer zone indispensable in its own right. The spreading Daesh and the terrorist organization YPG carried out several terrorist attacks on Turkey for years, which has cost the lives of several hundred people in Anatolia and has threatened the country's domestic political stability.

The illegal immigration of terrorists, which initially could not be stopped because of the approximately 900-kilometer-long (559-mile-long) Turkish-Syrian border, has forced Turkey to build a wall along that boundary at great financial and logistical expense in order to prevent illegal crossings.

In addition, the worsening situation in Syria led to a considerable flow of migrants towards Turkey. As it has taken in more than 3 million refugees, Turkey was no longer able to bear the burden on its own for financial and domestic political reasons since the refugee crisis is not only a Turkish, but also a European and even a global one.

For years, President Recep Tayyip Erdoğan called on the West to intervene militarily together, to ban flights over Syria and to set up a buffer zone in northern Syria for the receiving refugees and for the national security of NATO ally Turkey.

The West, however, did not initially do much and merely observed the struggle in Syria for many years. Finally in 2014, the United States began air strikes against Daesh in Iraq and Syria. Only then did some Western states and allied Gulf monarchies decide to join U.S. forces in the fight against Daesh and supported their air strikes in both countries. Russia also started air strikes in Syria at that time. As its ally, Russia has a maritime base in the Syrian city of Tartu, which is regarded as its gateway to the Mediterranean Sea. So, under the guise of fighting Daesh, Russia has been able to support Assad's troops from the air and provided the regime with logistical support and military equipment in order to regain its sphere of influence throughout Syria, worsening the conflict and the humanitarian disaster in the region. For this reason, however, it is not only surprising, but also understandable why Russia has carried out these operations.

In the meantime, the U.S., together with the terrorist organization YPG, gradually launched ground offensives in Syria against Daesh and defeated them to a large extent. Yet, the United States has tried to fight one terrorist organization with another as it often has throughout its history, despite the admonition of Turkey, which as the only regional power with a very extensive Syrian border, suffers most from the civil war and the associated YPG-backed terrorist attacks.

In this context, the terrorists were equipped with several thousand truckloads of weapons by Washington, which were aimed at defeating Daesh. Over time, however, it became obvious that the background was not to bring peace to the region, but rather to establish a terror state in northern Syria, from which Turkey could be easily attacked.

Turkey, by contrast, has been fighting the PKK (from which the YPG is a branch) terrorist organization in the region for 40 years. As such, the nearly completed struggle with the PKK would have flared up again and – of course – would have caused serious damage to Turkey. To make matters worse, the YPG terrorists were celebrated and portrayed as heroes in the Western media, especially in the U.S. at that time, which generated empathy and continued to cast Turkey in a bad light.

As a consequence, Turkey launched its first ground offensive in Syria in August 2016, called "Euphrates Shield." This was remarkably launched just one month after the attempted coup d´etat in July, in which the Gülenist Terror Group (FETÖ), with the support of the United States, planned to overthrow the Turkish government.

Against this background, it becomes clear that the U.S. struggle in Syria was mainly directed against Turkey. This motive can also explain why the United States reacted harshly to “Operation Peace Spring” at the end of 2019. The operation aimed to eliminate the last remaining YPG terrorists east of the Euphrates river. So, the U.S. again failed, as it did with the coup attempt, to weaken Turkey's long-term outlook or curb its influence in the region.

What about the EU?

In this context, it should also be made clear that the European Union had neither done anything to end civil war in Syria and to protect NATO ally Turkey from external threats nor has it put a lasting end to the refugee problem.

The EU only offered Turkey the financial aid of a few billion euros as part of the EU-Turkey deal (2016) – transferring only a fraction so far – while Turkey has already spent over $45 billion for the accommodation of refugees.

Furthermore, the agreement should have granted Turkey visa-free status in return for the accommodation of illegal immigrants in Europe. The EU, however, has not yet fulfilled this obligation, arguing that Turkey has strict anti-terrorist laws that were not compatible with European values. Considering the anti-terrorism laws of EU member states and Greece's treatment of Syrian refugees on the Turkish border, it becomes clear that this was only a retrospective excuse.

As a result of this unfair treatment and abandonment of Turkey, it was only a matter of time until this agreement would burst, which it did. Against this background, it is evident that the EU has also acted against Turkey. This becomes even clearer when considering that many European states granted asylum and even citizenship to FETÖ terrorists after the failed coup attempt.

In line with interests

From what has been explained so far, it is comprehensible why Russia represents its own interests in Syria and that they were not directed against Turkey. Even if the motives of the U.S. and EU remained opaque at first, it became clear that the military and political actions were only directed against Turkey to diminish its increasing influence in the region.

As described in my last article, however, Turkey is also fighting on the Mediterranean front against the imperial ambitions of the West. Greece, South Cyprus and Israel in the Eastern Mediterranean, together with Egypt, built an alliance with the West and has deliberately opposed Turkish participation in the EastMed project, even though this would be economically more advantageous to these countries and Turkey has a legal claim to it anyway.

Moreover, during the recent Idlib crisis with Russia, it was very striking that the United States strongly supported Turkey to turn back to the West, even though President Donald Trump had threatened Erdoğan with the toughest sanctions in the history of their bilateral relations a few months earlier because of Turkey's Syria offensive.

It is also the same West that denied Turkey entry into the EU for half a century and refused to hand over Patriot and F-35 missiles, despite the fact that the Turkish Government had already made a large down payment and was not compensated for the void.

In fact, Turkey does not need external assistance and can escape the situation on its own, as it has strong diplomatic channels, determination and military strength that it has developed over the last 18 years. Moreover, Article 20 of the Montreux Agreement (1936) also grants it the effective means of preventing the passage of foreign frigates through the Dardanelles and the Bosporus in times of war.

Because of this, Turkey was able to make strong demands on Russia during the Idlib negotiations in Moscow on March 5, 2020, as Russian warships have to pass through these straits to enter the Mediterranean and to reach Syria.

To sum up, Turkey is not pursuing Neo-Ottomanism, but merely intends to protect its national security, while the West is pursuing new colonization and imperial aspirations. Nevertheless, the results of the diplomatic negotiations with Russia, in addition to growth figures, show that Turkey is well on its way to becoming a new regional power in the Eastern Mediterranean, the Middle East and Eurasia, and in essence, it has already started to become so.

Idlib stands for the fear for the West and as its last attempt to rededicate Turkey and contain its regional influence, which it failed to do so far. Contrary to the popular belief that the West will be weakened after the coronavirus pandemic, I would like to state here that the it has already begun to regenerate and will soon pursue its goals with greater assertiveness!