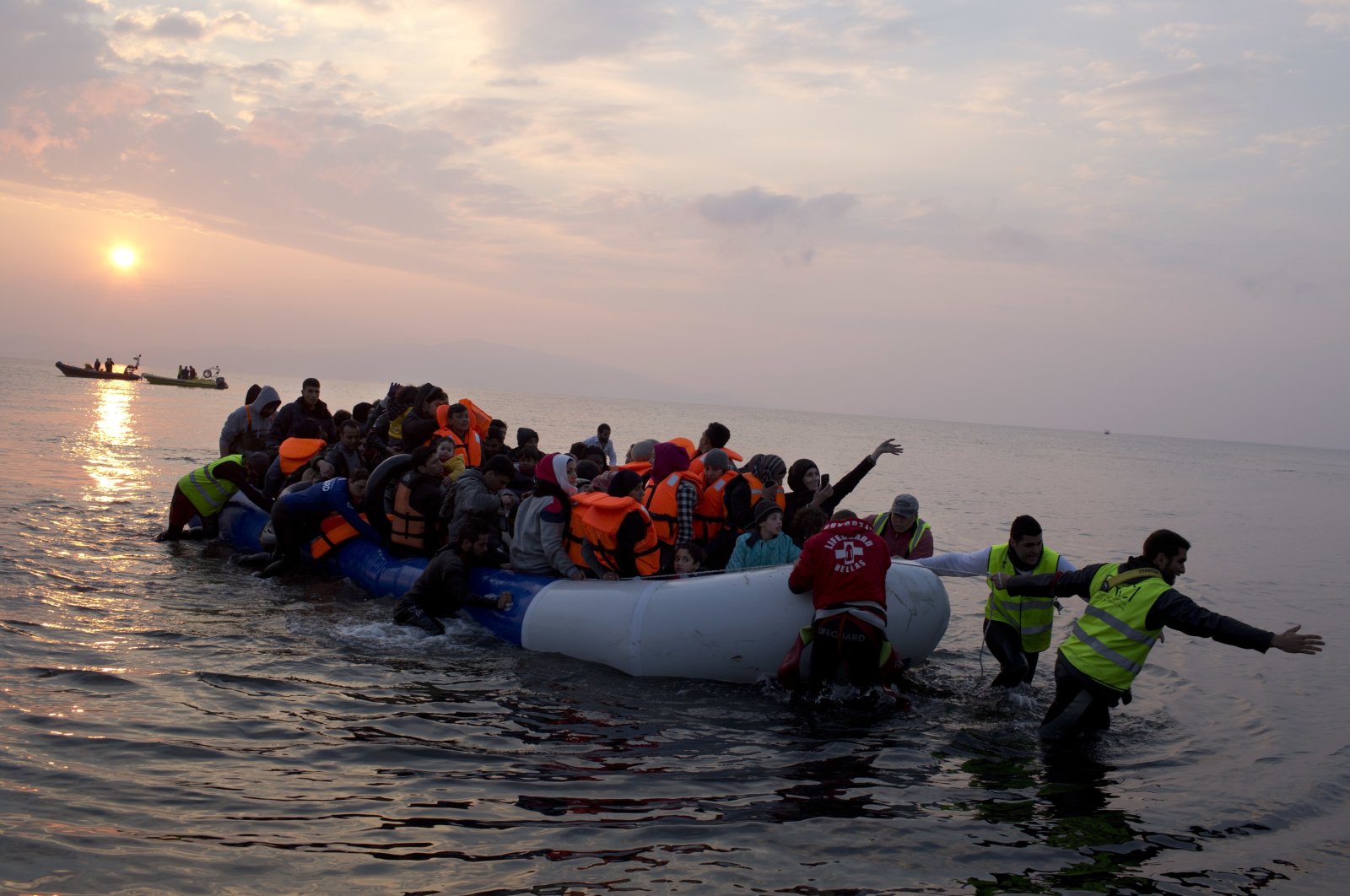 Volunteers help migrants and refugees on a dingy as they arrive on the shore of the northeastern Greek island of Lesbos, after crossing the Aegean sea from Turkey, March 20, 2019. (AP Photo)
by Emrah Atar Sep 08, 2020 12:05 am

Asylum-seekers deserve indiscriminate humanitarian help, and they deserve it without ifs or buts

Unfortunately, one of the most heartbreaking human tragedies of our day is the refugee crisis in which countless are forced to leave their homes.

We are facing refugee crises around many parts of the world as never before seen. In recent years, refugee crises have been increasing in many countries. Syria, Myanmar, South Sudan, the Democratic Republic of Congo and Venezuela produce some of the biggest numbers of those fleeing.

According to one U.N. report, there are currently about 70 million displaced persons worldwide – about 26 million of them registered as refugees. In addition, these numbers are growing day by day despite the pandemic.

Since the conflict started in 2011 in Syria, thousands of civilians have been killed, and millions have been forced to flee from their homeland. Now, in its ninth year, 13.5 million are in need of humanitarian aid within the country.

Among those fleeing the conflict, the majority have taken refuge in neighboring countries, with figures from the United Nations High Commissioner for Refugees (UNHCR) accounting for 5.6 million, having fled to Turkey, Lebanon, Jordan, Egypt and Iraq. Meanwhile, nearly a million have sought asylum in Europe. Turkey currently hosts the most refugees in the world, with a number of over 3.5 million.

Since the war began and the refugee crisis unfolded, many countries have been looking for ways to keep as many migrants as possible away from their borders.

International agreements have been revised and new treaty texts created. Although Western countries have tried to keep their border gates as tight as possible in the face of the issue, they have not been able to prevent about one million Syrians from crossing into their countries.

The Turkish government has rolled out many policies for Syrian refugees since the start of the civil war and has perhaps been one of the few countries to help them affirmatively, despite much negativity and criticism. You can appreciate that it has never been easy to welcome more than 3.5 million people who have come to your country in such a short space of time, neither for the government nor for Turkish citizens.

In this respect, a hot talking point a number of months ago was the forced migration of Syrian refugees to the Turkish border in the face of the ongoing attacks in Idlib, and the fact that Turkey started allowing migrants to cross into Europe.

In recent days, events have made it clear, however, that we should reexamine the European Union's approach to refugees.

As we know from the very beginning, the EU has opposed the acquisition of refugees and has implemented policies in this respect. The point reached today indicates that they are still moving in this direction.

In this sense, we ought to look at the main issues concerning the EU, especially Greece, in response to the human exodus in terms of the fulfillment of the requirements in agreements with the bloc and the attitude of the Greek government toward refugees.

On March 18, 2016, the European Council reached an agreement with Turkey aimed at stemming the flow of irregular migration via Turkey to Europe. In sum, the agreement centered on three main issues: the repatriation of all new irregular migrants crossing from Turkey, the fulfillment of the visa liberalization for Turkish citizens and EU financial aid for Turkey.

Under the 2016 agreement with the EU, Turkey began imposing more robust controls to stem the flow of migrants and refugees into Europe until the situation escalated in Idlib.

In the face of adverse developments in the region, Turkey subsequently decided that it would not stop the passage of refugees to Europe.

Thousands of migrants, mostly Syrian, Pakistani and Afghan, have since flocked to areas near the Turkish-Greek border to try to cross to the Greek side after the decision. The EU and Greece's response to this influx has unfortunately been met with disappointment by the whole world, while more than 100,000 people have made it to Greece.

However, the terms of the agreement signed in 2016 are still being discussed.

The Turkish government states at every opportunity that the promises made have not been fulfilled by the EU and has not held back from threatening the bloc.

Consequently, the main reasons for Turkey's decision can be explained as the EU's failure to fulfill financial pledges, lack of a visa liberalization agreement and no action being taken against the human flow in Idlib where a new influx was arriving from. Most importantly, however, was the fact that Turkey was no longer capable of dealing with the refugee crisis alone.

The 2016 EU-Turkey deal helped to ease the crisis on Greek islands near Turkey, whose facilities were overwhelmed by a refugee influx. However, the year 2019 was not a good year for Greece or refugees living there. Protests grew in the Moria refugee camp, the most populous refugee camp in Europe – constructed to house 3,000, yet home to more than 20,000 refugees.

Greek authorities scrambled to deal with unrest in the densely populated camp. In light of the turmoil, the Greek government sought to start repatriating thousands of migrants to Turkey. However, this has not happened, and the current situation has made it almost impossible.

Indeed, due to an escalation of tensions in the region, Turkey has opened its doors in the face of recent attacks that have prevented human beings from entering Europe in line with the agreement previously made with the EU.

Thousands have now flocked to the Turkey-Greece border to make their way to Europe. Recently, Greece has been using brutal means to block refugee crossings and many refugees have lost their lives in the attacks. Greece has even received funding from the EU for these unacceptable measures. Nevertheless, those who speak of human rights are silent against such violations. The inhumane attacks faced by refugees seeking to reach Europe from Greece have actually exposed the real face of Europe's approaches toward refugees.

The world witnessed this kind of inhumanity toward refugees in Hungary a couple of years ago. Demagogues such as Prime Minister Viktor Orban positioned themselves as defenders of Christendom and implemented anti-immigrant policies to protect Europe from an "invasion" by Muslims. These attitudes and actions are absolutely wrong and contrary to human rights.

To see those in the Middle East – who opened their doors to Europeans in crises such as World War II and has been home to Christian, Muslim and Jewish traditions for centuries – put up with this cruelty, must probably be an embarrassment to Europeans.

Moreover, Europe should certainly take more constructive steps in addressing these refugee crises that have rocked the world and develop policies in this direction, since I believe the EU has the capability.

On the other hand, after all, that has happened, Germany has decided to accept migrant children into their country in a step designed at removing minors from the Greek islands. In this sense, Germany has taken at least some steps to implement policies.

Nevertheless, this policy, which is intended to be implemented, brings to mind the children who were previously adopted by European countries and subsequently disappeared – because nearly 96,000 children have disappeared just in a few years.

Let me raise some simple questions. Why just kids? Why do you ignore the rest? Why do you separate these children from their parents, and why do you not accept their families as well? Of course, the answer to these questions is straightforward because these vulnerable children are very likely to be assimilated and used in other ways in the future; furthermore, this policy also reveals how disingenuous Germany is in their refugee policies.

The EU has obviously failed in its migration policies, and one of the most significant reasons for this is perhaps the rise of populism.

Of course, it is not right to explain the whole thing from this point of view. In contrast, extremist parties and ideas have made a considerable impact on European politics in recent years. Populism, along with anti-immigrant and anti-Muslim sentiment, has been adopted into policy by mainstream political parties in many EU countries in order to prevent the human influx into Europe. All these demonstrate that a growing populist movement is emerging in Europe and that people's views of refugees are changing rapidly.

Turkey can no longer shoulder this burden alone and has been on a constant search to reduce its impact. The Syrian refugee problem is a wicked one that is becoming increasingly difficult to resolve.

Furthermore, the failure of the EU to keep its promises makes the situation even worse while the Turkish government has been looking to find different solutions in this regard.

Conditions in Syria and the region indicate that Syrians who have fled to other countries will remain where they are for a longer time, and a greater human influx will occur in no time. This indicates that the survival of those people depends not only on host countries but also on the availability of aid provided by international organizations.

Therefore, a common platform must be established to resolve hostilities or at least reduce the tension in the region to stop the forced migration and influx of more people.

As a final word, it does not matter who they are, where they come from or what their identity or beliefs are, refugees deserve humane treatment. Therefore, the world must act now to support not only Syrians but every refugee or migrant, by uniting around a vision for their collective future.

*Ph.D. candidate in Development Policy and Management at the University of Manchester