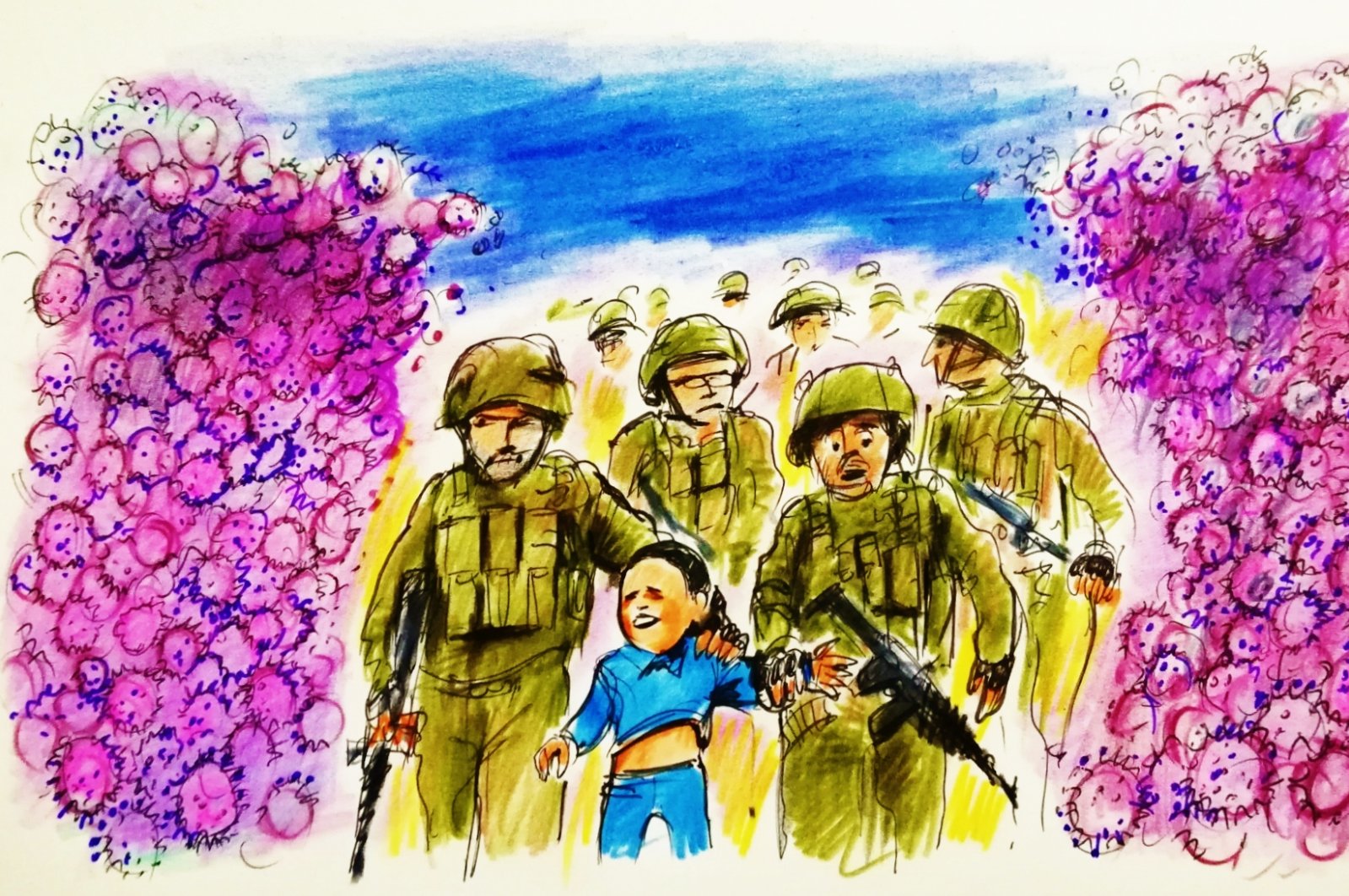 With coalition negotiations underway in Israel, West Bank annexation remains a top priority on the agenda for the Israeli government right now.

Israeli Prime Minister Benjamin Netanyahu, who reached an agreement with his political rival, Benny Gantz, for an emergency unity government to confront the coronavirus, wants to pursue Trump’s so-called peace plan and annex large parts of the occupied West Bank.

Blue and White party chief Benny Gantz acquiesced to what he considered Netanyahu’s genuine call to “put politics aside” for the sake of the country’s welfare, splitting his party apart in the process, while the prime minister’s concern over the pandemic was never his only priority.

The Israeli leaders agreed on a plan to start a formal process this summer to claim sections of the occupied Palestinian territory as part of Israel, the daily Haaretz newspaper reported.

The scheme would be presented to the government if Washington agrees to it, the Israeli newspaper said. The United States previously did not object to the annexation of Israeli settlements and the Jordan Valley in the West Bank.

After the Cabinet passes it, the plan would require the approval of the Israeli parliament, the Knesset.

For months, Netanyahu and his fellow right-wing leaders have pledged to carry out unilateral annexations as soon as possible – with the deliberate goal of making the occupation permanent and preventing the creation of a viable Palestinian state alongside Israel.

Annexation of large swaths of the occupied West Bank, with the full support of the U.S. government, will constitute a paradigm shift for those who have been fighting for a two-state solution. Liberal Zionist organizations – from J Street to the Israel Policy Forum (IPF) to Americans for Peace Now (APN) to the New Israel Fund (NIF) – have long worked toward realizing the vision of Israel as a democratic state with a Jewish demographic majority and defined borders, separated from the Palestinians in the West Bank and Gaza. They are now faced with the imminent annexation of the West Bank and are grappling with how to respond.

The Jewish pro-peace groups based in the U.S. continue to insist, as they have for years, that a negotiated two-state solution is the only viable or desirable final outcome.

On April 8, 11 members of the U.S. Congress issued the following statement regarding reports of a new coalition government in Israel which agreed to move forward with unilateral annexation of West Bank territory:

“As strong supporters of Israel and the United States-Israel relationship, we are deeply concerned by reports that the coalition government being formed in Israel intends to move forward with unilateral annexation of West Bank territory. This runs counter to decades of bipartisan U.S. foreign policy and to the will of the House of Representatives as recently expressed in H.Res.326, which opposes unilateral annexation and explicitly warns against the dangers of such an effort for peace in the region and Israel’s security."

“Amidst the current global health pandemic and financial crisis, we urge all parties involved in the formation of a new government not to create an additional crisis by agreeing to move forward with unilateral annexation, the effects of which could yield additional catastrophic consequences for all parties in the region and beyond," the statement continued.

“At this sensitive and critical time, we support a return to a two-state framework and urge all parties to refrain from commitments or actions, such as unilateral annexation, that undermine the possibility of serious, good faith, bilateral negotiations, which still represent the surest path to a durable peace," it said.

Recently, Nimrod Novik, a foreign policy veteran, said in a live interview with J Street that negotiations are changing by the minute, but the latest terms are for a three-month freeze on annexation until July 10.

Novik lamented that annexation has gone from “the whims of a messianic minority” a few years ago to being all but Israeli policy. “It’s unbelievable," he said. And even limited annexation “will end almost inevitably with us controlling the entire territory and the 2.6 million Palestinians.”

Novik called on Democrats in the U.S. to act. “You’d better act to deter this," he said, urging them to threaten Israel with the end of bipartisan support for Israel among Democrats and Republicans, by doing things “we won’t be able to accept,” and maybe politicians will wake up.

Besides, Novik said that the annexation will cost Israel 52 billion shekels a year, or about $12 billion, four times the American security assistance. “Let that sink in,” Novik continued.

Liberal Zionists are treating this serious issue as an emergency. The Israel Policy Forum (IPF) board of directors implored Gantz and his deputy Gabi Ashkenazi not to join a government that will annex territory in the West Bank. IPF writes as proud Zionists who have “devoted our lives” to supporting Israel.

“We write to you as American Jewish communal leaders who are proudly Zionist, unquestionably pro-Israel, and who have devoted our lives to supporting the State of Israel and ensuring an ironclad relationship between Israel and Diaspora Jewry,” said the signatories to the letter addressed to Gantz and Ashkenazi.

"In the midst of this unprecedented health and financial crisis for Israel, we respectfully urge you not to use the need for unity in the face of emergency to create a different crisis for Israel by moving forward on unilateral annexation," they added.

The IPF, which prides itself as a serious think tank with a behind-the-scenes role in diplomacy, has advocated for a two-state solution to ensure that Israel is “Jewish, democratic, and secure” for nearly 30 years.

IPF says that annexation would really wreck the relationship with American Jews, who have become more and more distant from the Jewish state. "Should the annexation be advanced, the majority of American Jews who oppose such a policy will feel more alienated from Israel as a result. Just as we expect that our own government focus on the crisis at hand without using the fear and uncertainty felt by Americans to push through harmful and unrelated policies, we ask that the leaders of the Jewish state to which we are all so committed do the same," it said.

The foreign policy establishment in the U.S. is also responding. Colin Kahl, formerly of the Obama administration, commented: "Even in the midst of the COVID-19 pandemic, there’s growing concern that the right-wing in Israel will push for annexation, perceiving a shrinking window to do so. Doing so would be profoundly unjust, costly, & dangerous. It would also jeopardize bipartisan U.S. support for Israel."

Israel has begun drawing up maps of Palestinian lands in the occupied West Bank in preparation for annexation in accordance with U.S. President Donald Trump’s so-called peace plan.

“We are already at the height of the process of mapping the area that, according to the Trump plan, will become part of the state of Israel. It won’t take much time... Within a few weeks, it will happen.” Netanyahu remarked at an election campaign rally in the Maale Adumim settlement months ago.

Netanyahu said the area would include all Israeli settlements and the Jordan Valley – territory which Israel has kept under military occupation since its capture in the 1967 war and which Palestinians consider the main part of their future state.

Netanyahu’s right-wing base and many members of his coalition cabinet view the West Bank as the biblical heartland of the Jewish people.

Netanyahu's plan to start annexing right after Trump’s plan announcement changed in light of comments by the special adviser to the U.S. president Jared Kushner that the map included in the Trump plan was a “conceptual” one and that the specific border would have to be delineated by a joint U.S.-Israel committee.

As settler leaders started pushing for annexation despite U.S. objections, Israel has begun preparing a precise map of the parts of the West Bank it intends to annex disregarding any international law.

According to the Fourth Geneva Convention, an occupier may not transfer its population to territory it occupies in order to prevent the colonization of occupied territories.

Further instances of annexation include Israeli efforts to blur the Green Line between Israel and the West Bank by way of roads or through routing the separation barrier to encroach into West Bank territory.

This annexation has not only occurred intentionally, through long-term gradual efforts by politicians and settlers to transform reality, but also organically by changing the perception of Israelis and even of Palestinians and international observers over time.

In 2017 and 2018, President Trump’s first years in office, there was an increase both in systematic annexations and attempts to make the leap to formal legal annexation. The former includes an upsurge in tenders awarded for settlement construction in the West Bank besides East Jerusalem, where the Israeli government is moving to intensify settlements. This process has been emboldened by the Trump administration’s unilateral recognition of Jerusalem as Israel’s capital.

Trump’s plan, which will exacerbate and entrench conflict rather than resolve it, gives the Palestinians a fractured, multi-enclave entity while allowing Israel to annex approximately 30% of the West Bank, granting Palestinians territory equivalent to 14% of the West Bank, primarily from the Negev Desert, which is located dozens of kilometers from the Gaza Strip. These territories, due to their vast distance from the future Palestinian state’s infrastructure and population centers, do not meet the Palestinians’ genuine needs for land with potential for future development, thus harming the state’s prospects for stability and sustainability. In effect, the land of the future Palestinian state is equivalent to a mere 84% of the Palestinian territories as per the pre-1967 lines.

Likewise, this constitutes a blatant violation of the basic principle of the territorial compromise on which the 1967 lines are based, whereby Palestinians forfeit their dream of sovereignty over Mandate Palestine and settle for 22% of it, per the borders determined prior to 1967.

For Palestinians and most of the Arab world who rejects Trump’s plan, the only map that they are willing to accept is the map of a Palestinian state on the 1967 borders with East Jerusalem as its capital.

The U.S. proposal is not the legal and viable means to achieve peace and only a resolution based on two states for two peoples, with a defensible border, Jerusalem as both states’ capital and an agreed-upon solution to the refugee issue, can bring about an end to the violent conflict and increasingly anti-democratic reality that has persisted for decades.