Western Sahara and the pretext of the Arab Maghreb Union 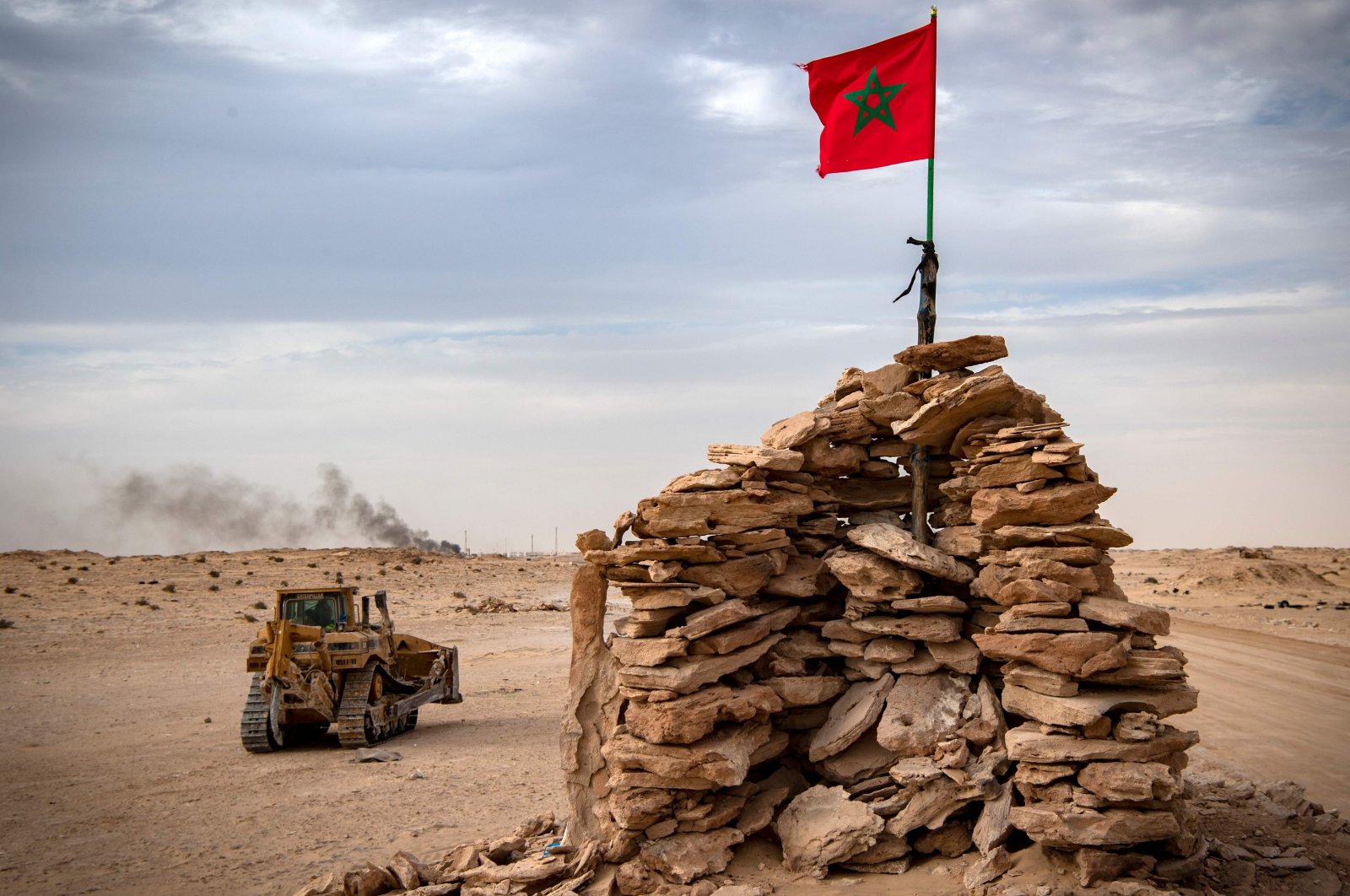 A bulldozer passes by a hilltop manned by Moroccan soldiers on a road between Morocco and Mauritania in Guerguerat located in the Western Sahara, Nov. 23, 2020. (AFP Photo)
by Imad Atoui Nov 25, 2020 12:05 am
RECOMMENDED

Those who want the Arab Maghreb Union to bolster Morocco need to question the timing of their military campaign and realize two things: annexing Western Sahara to the Mekhzen does not guarantee Maghreb unity, just as recognizing the self-determination of the Sahrawi people does not break that hope.

Western Sahara has never been part of Morocco. After World War II, a wave of liberation movements swept over the European colonies in Africa. While Morocco achieved its independence from the French in 1956, Western Sahara remained under Spanish control. In 1958, the colonial administration there announced that Western Sahara was a Spanish province.

In 1963, every African state that had signed the U.N. Charter claimed Western Sahara as independent except Morocco, which it did four months later. In 1967, the U.N. General Assembly issued resolution 2354 that required Spain to apply the principle of self-determination for the Sahrawi people.

In 1975, the Spanish departure opened the door for Morocco to annex Western Sahara to its territory. Despite the U.N.'s successive resolutions supporting Sahrawi matters following the colonial liquidation, Morocco has always claimed the right to annex the territory.

The conflict between Morocco and the Sahrawi, which is headed by the Polisario Front, is not new. Except for the fighting in 1975, the back and forth between Morocco and the Polisario Front was always a stable conflict that never escalated to open war. What has changed in Western Sahara is the timing and the actors, coupled with an open military campaign.

The political and geopolitical decline of the U.S. followed by the intense impact of COVID-19 pandemic marked a turning point towards strategic calculations. The American descent post-9/11 and its geopolitical recession post-2011 pitted the U.S. against China in the region through Western Sahara.

Morocco has always been in the U.S. camp, while Algeria joined the Soviets in the post-independence era. By that, it appears Washington's strategy to stifle the Chinese Belt and Road Initiative (BRI) is to play states against each other. This means security instability works in favor of the U.S., undermining the Chinese economic project.

The Moroccan military campaign coincided with the normalization of relations between Egypt, the United Arab Emirates (UAE) and Bahrain with Israel, casting doubt about the timing of the violence. The war came nonetheless just a few weeks after Abu Dhabi opened a consulate in Laayoune, Western Sahara's largest city.

Algeria has always been seen as a rogue state by Israel while also acting as an impediment to the U.S.

It is clear that Tel Aviv is the active agent in the Middle East, while the UAE has become Israel's new twin in North Africa. Thereby, the question remains: has the UAE convinced Morocco to normalize ties with Israel and get awarded with Western Sahara?

Given that, many Arabs are backing Morocco's military aggression on the pretext of Maghreb unity. Geopolitically speaking, recognizing the independence of a nation does not undermine the notion of establishing a union.

For instance, recognizing the independence of Eritrea in 1993 and Namibia in 1990 did not undermine the African Union founded in 2002. Likewise, achieving unions like the Arab League, the Gulf Cooperation Council (GCC) and the Organisation of Islamic Cooperation (OIC) have never succeeded in bringing members together.

In contrast, besides the failure of many decisive affairs in the Arab and Islamic worlds – in Libya, Syria, Yemen, Palestine, Kashmir and Myanmar – members within the same union are more hostile toward each other than against their alleged enemy, Israel.

They are brothers in a League, but enemies on the ground. Taking the Arab league and the OIC as examples, their members use slogans of brotherhood in their meetings and political rhetoric, but behind that facade is the states' true character. Several instances include Qatar and the UAE's support of NATO's intervention in Libya; Saudi Arabia, the UAE and Egypt's relationship with Qatar; Saudi Arabia and the UAE working against Iran and of course the war in Yemen. Many are even against Palestinian independence.

In this respect, recognizing Western Sahara's right to self-determination would only clear out colonialism and lead to hope for an Arab Maghreb Union. If the matter of Western Sahara concerns the enemy-brothers about Maghreb and Muslim unity, it is better to recognize the Sahrawi and push the U.N. to speed up the referendum process through its Mission for the Referendum in Western Sahara (MINURSO). Instead of forcing a nation to be submissive with guns, it is preferable to support Sahrawi freedom and look forward to including them in the union.

Finally, the geopolitical shifts resulting from the coronavirus, pushing the world towards armed conflict and wars must be taken into account. The U.S. strategy towards North Africa with the UAE move in the region speaks volumes about Moroccan aggression.

Yet, whether Maghreb advocates would claim independence for the Sahrawi if normalization with Israel or a U.S. strategy lay behind the current military aggression remains as a question to be answered.