What makes ‘Resurrection: Ertuğrul’ a superhit drama series in Pakistan? 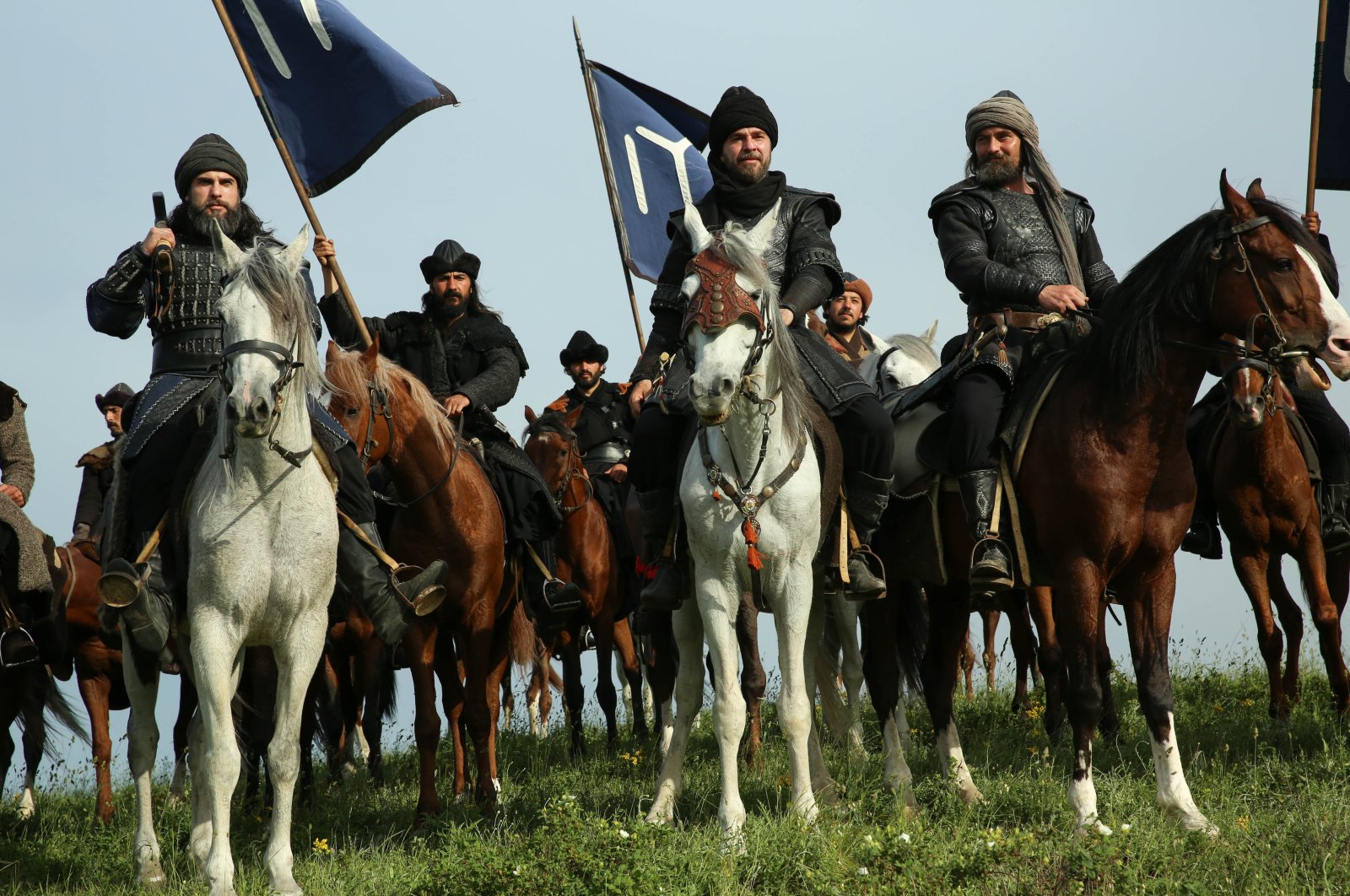 A still shot from the Turkish series "Resurrection: Ertuğrul" depicting Ertuğrul (C) and other Turkish heroes (Alps) riding horses and holding the iconic flag of the Kayı tribe.
by Irfan Raja Aug 26, 2020 12:05 am
RECOMMENDED

The Turkish series "Diriliş Ertuğrul" ("Resurrection: Ertuğrul") is a timely and relevant reminder for the disunited Muslim world that is facing similar challenges of fighting corruption, injustice and inequality.

Its core message is to revisit and rethink Muslims' glorious past that originated from fundamental principles of Islam, a religion that today is facing rampant Islamophobia, while Muslims are entangled in political turmoil, mutual confrontations, denials and disarray.

Many Pakistani viewers believe that the series has enhanced their confidence and trust in rebuilding a truly Islamic society that caters to its inhabitants equitably. Since the creation of Pakistan, a colonial system has been in place surrounding all major institutions to control the public.

Ertuğrul has brought back the imaginary idea of establishing a society that endorses justice and equality and fights against oppression, demerit and corruption.

"Diriliş Ertuğrul" tells the story of the 13th century Muslim Oghuz Turk leader who had extraordinary determination and strength to achieve a goal.

He is a man who comes out as more powerful after every trial, ambush, betrayal and antagonism and shows tremendous resolve to achieve his goals.

A record 133.38 million Pakistanis have watched it. No other film, drama or documentary has appealed to so many Pakistanis.

Today, newborn babies are named after the characters, and the actors are being approached by Pakistani businesses and services companies including cricket clubs to become their brand ambassadors.

So, what makes Pakistanis aficionados of Ertuğrul? The next passages explain the relevance, associations and reasons for the vast followership in Pakistan.

A dream of a just state

Ertuğrul's idea of establishing a state resembles that of Pakistan's founding father Mohammad Ali Jinnah. A search for a place where the next generations pledge themselves to the divine law which guarantees justice and equality.

Imagine the mass migration that resulted from the founding of a Muslim state called Pakistan, all in the name of religion. This matches the Kayı tribe's struggle to settle down and found a state based on Islamic ideologies.

Pakistan is the dream of Sir Muhammad Iqbal (Allama Iqbal) whose poetry reflects the teachings of the Holy Quran. The qualities evident in Iqbal's work are similar to those displayed by Ertuğrul's character: a commitment to justice and opposition to cruelty.

"Train to Pakistan," "Kartar Singh," "Jinnah," "Partition" and "Garam Hava" are a few movies that mirror the travails of millions of Muslims who witnessed torture, killings, forced marriages, separations and trauma before reaching Pakistan.

A new dawn, a new life

Surprisingly, Ertuğrul left behind his brothers, tribe and childhood memories in search of a peaceful place for his future generations. In the same vein, Pakistan’s founding father left behind his only daughter and went through horrendous trails that ended with his death.

In each episode, Ertuğrul pledges to set up a state, based upon divine law, that guarantees equality, justice and freedom. Similarly, Jinnah also charted three fundamental principles: unity, faith and discipline, originating from the Quran.

Ertuğrul offers a solution to present-day Muslim problems through the prism of Muslims' past history. It highlights the struggle including persecution, forced migration, wars and conflicts early Muslims had to face in order to achieve a homeland based on Islamic principles.

Many countries like Syria, Libya, Yemen and Somalia are engaged in never-ending disputes. Saudi Arabia and Iran, allegedly two Muslim countries, are fighting for their regional hegemony. Sadly, two sects of Islam are face to face in battles that have killed and displaced millions of Muslims. So, who is responsible for the destruction in Syria and Yemen?

Throughout the Muslim world, mounting corruption, injustice, inequality and oppression are hurting Muslims who are waiting for a leader to reunite them.

Ertuğrul offers a stunning lesson for those living in challenging times in South Asia: Every hardship brings ease with it. Recall, how Ertuğrul gained wisdom, knowledge and inspiration from his mentor Ibn Arabi, a scholar, mystic, poet and philosopher of his times.

Throughout, Ibn Arabi compares Ertuğrul's adversities with the struggle of the early Muslims and teaches him to overcome challenges by strengthening his bond with the Creator, the essence of a true Muslim.

Also, the significance of education, scientific discovery and stipulation to build a sound economy are takeaway messages for the Muslim world, which, at present, lags behind in modern-day discoveries.

Ertuğrul is a shut-up call to those branding Islam as a backward religion as it shows how Ottomans' founding father was inspired by Islamic principles.

Look at the regional and international politics, for example. Ertuğrul faced criticism and antagonism from his brother Gündoğdu Bey yet he never stopped standing with the oppressed people.

So many viewers of the series see Turkey and President Recep Tayyip Erdoğan standing up for Muslims in Kashmir, Palestine, Myanmar, Azerbaijan and beyond.

Coincidentally, history is repeating itself as Ertuğrul confronted his family members to support those in oppression. Today, Turkey is reaching out to help Muslims in Libya and Syria despite facing hostility from some Muslim countries.

For centuries, the South Asian Muslims and non-Muslims have lived, witnessed and experienced just societies under the model kingdoms of Delhi Sultans of Turkic origins.

A documentary by Turkish state broadcaster TRT, “Pakistan’daki Hazara Karluk Türkleri,” ("The Hazara-i-Karlug Turks in Pakistan") traces the presence of thousands of Karlug Turks, descendants of Emir Taimur and Oghuz Khan who settled in the Hazara, Kashmir, Gilgit and Chitral areas for centuries. The Mehtars of Chitral and Karluqs of Pakhli Sarkar under the leadership of Sultan Raja Mohammad Iftikhar Khan are blood brothers of the Kayı tribe.

Bollywood has produced a series of films like "Razia Sultan" (1983), "Pukar" (1939) and "Jodha Akbar" (2008) that recall just societies and coexistence of different faiths.

Sadly, now Bollywood is reconstructing the Indian Muslims and reframing their history with storylines that seem to promote Islamophobia.

No wonder the Pakistani youth are dreaming of justice, equality and merit as successively the government has failed to overcome corruption and inequality.

When incumbent Prime Minister Imran Khan coined the idea of a “new Pakistan” inspired by the idea of Riyasat-e-Medina (Islamic welfare state), it was a historic moment for Pakistanis as he spoke about building a just society like early Medina. A just society.

Anyone can imagine why Pakistanis have so much adoration for Turkey, its glorious Ottoman past, Turkic Sultanates of Delhi and even Erdoğan's present-day government. These things are the dream of an ordinary Pakistani.