What Palestinians expect from a Biden presidency 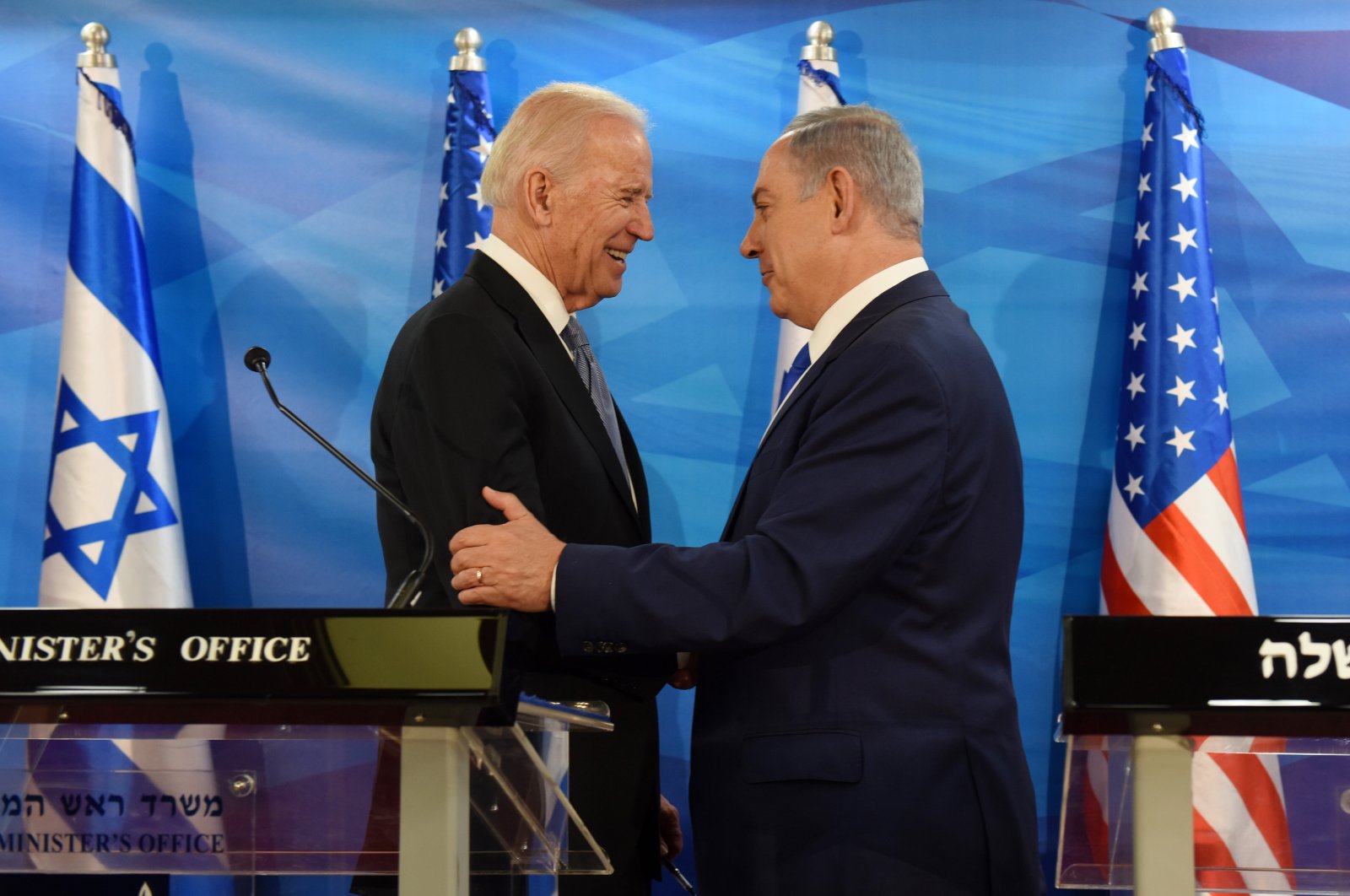 Biden’s chances of winning the November presidential election appear to be very high, and because of his extensive experience in foreign policy, many foreign leaders are reexamining his political record, especially in the foreign policy arena of the Middle East and his policy toward the Israeli-Palestinian conflict.

Palestinian leaders hope Democrat Biden, if elected, will tone down Washington’s pro-Israel policies and Palestinian-Americans have been backing his campaign for a critical change toward the Israeli-Palestinian conflict.

Soon after its inauguration, the Trump administration opened a new chapter in U.S. policy toward the Israeli-Palestinian conflict, taking draconian measures against key Palestinian issues.

Several moves have taken place under the Trump administration that mark a clear departure from the Oslo Accords in favor and support of Israeli plans to annex more than 30% of the occupied West Bank and design a new settlement of the conflict according to Israel’s interests and in violation of international law.

In late 2017, only a year after he took office, Trump recognized Jerusalem as the capital of Israel and relocated the U.S. embassy from Tel Aviv to Jerusalem, denying Palestinian’s right to east Jerusalem as their future capital.

A similar dangerous approach was taken by the Trump administration denying the right of return for Palestinian refugees whose families had been displaced by the Israeli occupation in 1948. In September 2018, Nikki Haley, the former U.S. ambassador to the United Nations, stated that the Palestinians’ aspirations for the return of refugees and their descendants to their homes within the pre-1967 borders were off the table.

In the same year, the Trump administration cut all U.S. funding to United Nations Relief and Works Agency (UNRWA) whose role had been to provide basic social services to around 5 million Palestinian refugees in Gaza, the occupied West Bank, Jordan, Syria and Lebanon.

In addition, the U.S. ceased all United States Agency for International Development (USAID) assistance to Palestinians in the occupied West Bank and Gaza.

These steps were widely perceived as a way of applying pressure on Palestinian leaders to engage in peace talks with Israel and the White House before the Middle East peace plan was officially declared.

Moreover, in September 2018, the Trump administration announced the closing of the Palestine Liberation Organization (PLO) office in Washington, and the U.S. Department of State stated that this decision was “consistent with the administration and congressional concerns with Palestinian attempts to prompt an investigation of Israel by the International Criminal Court (ICJ).”

On Jan. 28, Trump announced his so-called “peace plan” which was designed in all its aspects to serve the interest of the Israeli occupier, denying all Palestinian historical rights in Palestinian lands.

The plan was heavily tilted in favor of Israel, offering the Palestinians limited sovereignty in a small area of about 70% of the occupied West Bank and Gaza for a state, with no authority over territorial waters, borders or security.

The plan also rejects the long-standing Palestinian claim of east Jerusalem as the Palestinian capital and control over the Holy Haram al-Sharif.

The 181-page plan – dubbed the "Deal of the Century" and designed by Trump’s son-in-law and adviser Jared Kushner – was vehemently rejected by the Palestinian leadership.

Trump’s foreign policy concerning Israel is very clear. During his term, the president and his administration proved through statements and actions that the U.S. strongly supports the Jewish state, without any consideration for justice or ethics.

With the U.S. battling a resurgence of COVID-19 as daily cases and the number of fatalities continue to climb, the next president of the U.S., whether Trump or Biden, will have to focus almost entirely on conquering the pandemic, rebuilding the economy and restoring millions of lost jobs.

For Biden, reversing many of Trump’s controversial domestic policies will keep him busy, meaning that, for many months, foreign policy will take a backseat.

Biden told U.S. Jewish donors during a call last May that he would “reverse” Trump’s Israel policies that he said damaged the chances of a peace agreement with the Palestinians. He pledged to restore diplomatic ties with the Palestinian Authority (PA) and push both sides toward a two-state solution, reiterating his opposition to Israeli Prime Minister Benjamin Netanyahu’s proposed West Bank annexation while vowing not to reduce or withhold U.S. military aid to the Jewish state.

“I do not support annexation,” Biden told the donors. “I’m going to reverse the Trump administration’s steps that I think significantly undercut the prospects of peace.”

This includes repairing damaged ties with Palestinian leaders and resuscitating aid to the PA and funding humanitarian programs.

The U.S. had maintained a neutral stance for decades toward the claims on east Jerusalem, and its final status was meant to be decided in the latter stages of peace talks. Biden’s advisers say that he will not return the U.S. embassy to Tel Aviv, but that he would reopen a U.S. consulate in east Jerusalem that would cater to Palestinians and allow a Palestinian de facto embassy in Washington.

As for the two-state solution, unlike Trump, Biden supports the creation of an independent Palestinian state alongside Israel.

"A priority now for the cause of Israeli-Palestinian peace should be resuming our dialogue with the Palestinians and pressing Israel not to take actions that make a two-state solution impossible," Biden told the Jewish Telegraphic Agency last May.

Biden’s pro-Israel positions have been well known since he was vice president. He helped ensure unwavering support for Israel’s security and was a key advocate in securing support for lifesaving technologies like the Iron Dome, David’s Sling and Arrow 3 anti-rocket and missile defense systems. On the other hand, Biden helped shape the unprecedented $38 billion, 10-year, memorandum of understanding (MoU) between the U.S. and Israel signed in 2016, which was the largest such military aid package in U.S. history.

Biden’s views on Israel were made clear in a May 18 statement on his campaign website entitled "Joe Biden and the Jewish community: A record and a plan of friendship, support, and action."

It opened by conflating the Jewish state with Jewish values and went on to brag about Biden’s role in increasing military aid to Israel at the end of the Obama administration. It also promised that Biden, in violation of the First Amendment, would continue attacks on individuals and organizations that boycott Israel for political reasons and referred to Palestinian “choices” to commit violence.

Although Biden describes himself as a Zionist and a "stalwart supporter" of Israel, many Democrats are voicing opposition to Israeli policies against Palestinians ahead of the general elections in November. If Biden has a true desire to facilitate real change in the occupied Palestinian territories, he must acknowledge the asymmetric power structure that has enabled Israel's oppression of the Palestinians and the occupation of their land.

Although Biden’s views differ from those of democratic voters, these views remain significantly different from Trump’s. Even if Biden does not make any moves in a more progressive direction, he is still more likely to be influenced by Palestinian rights advocates.

Biden may not be perfect, but he is the only hope for the Palestinians after Trump magnified the Palestinian misery, despair and oppression in a way his predecessors could not have imagined.

“If Mr. Biden is elected in November, we hope that it will be a totally different dynamic,” Palestinian Prime Minister Mohammad Shtayyeh said last July during a virtual conference with the Carnegie Endowment for International Peace.

No matter how negatively Palestinians view Biden, the destruction a second Trump term could cause to them and their cause is unimaginable.

Trump will continue with his extreme policies, and he would do everything possible to annex as much of Palestinian areas as he can in four years, leading to Israeli sovereignty over all of the West Bank.

Although Palestinians do not expect much from Biden, the best that they can hope for from a Biden government is undoing much of the damage done by Trump. Although Democrats have failed previously to turn their rhetoric about a two-state solution into reality, Palestinians hope that Biden can bring about a real change this time and not only preserve the status quo.