Why are mosques under attack in Europe? Why do the British fear Muslims? 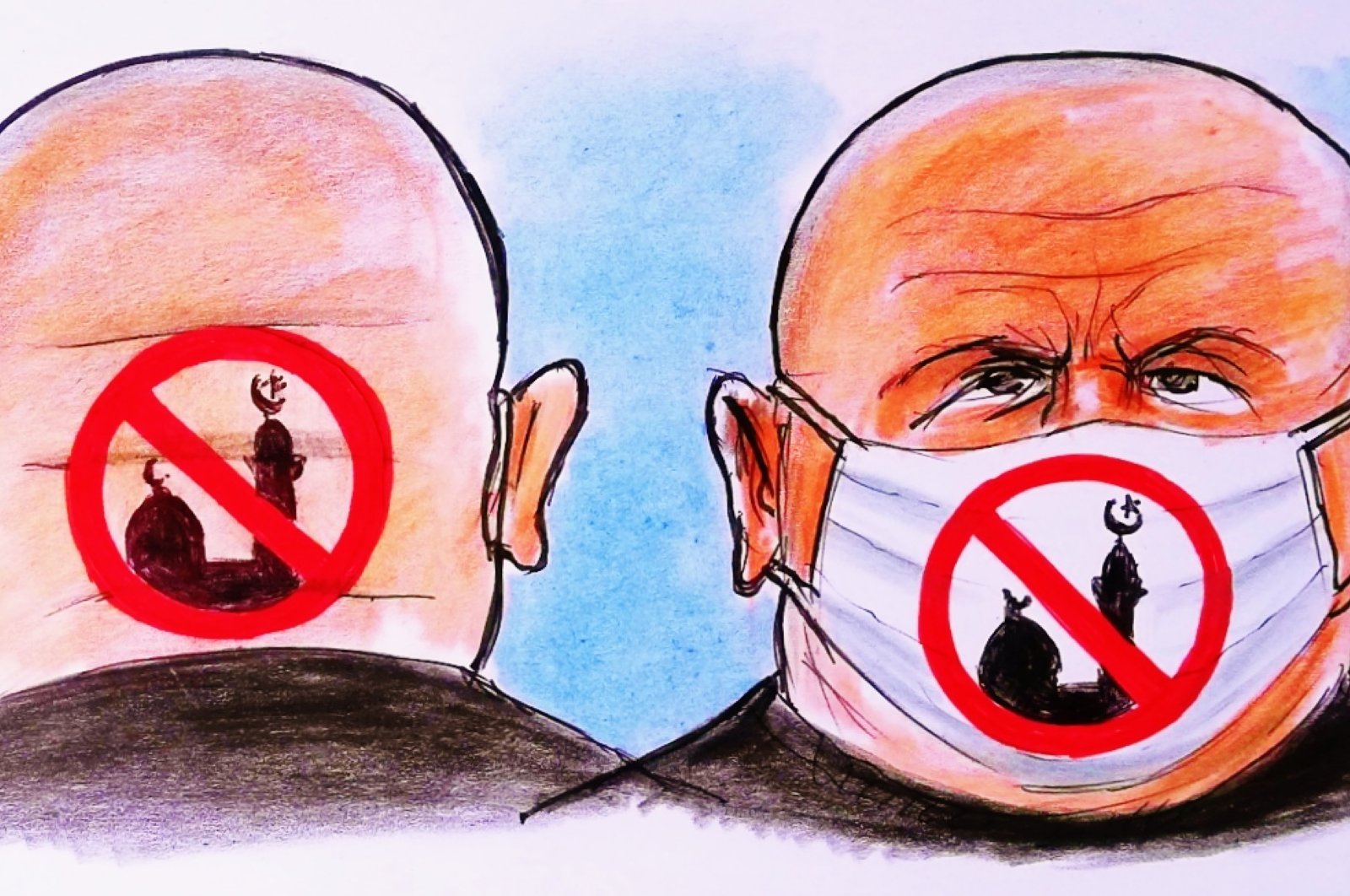 Anti-Islam sentiment is growing in Europe, and Western media is responsible

Mosques are under the constant threat of attacks in Europe. If it is because some terrorists happen to be Muslim, then fanatical Hindus, Buddhists and white supremacists' acts of terror could put churches and temples at risk too. However, this is not the case. Mosques serve the same purpose as churches, synagogues, temples or gurdwaras as a place reserved for worship and community activities.

So, what inspires hatred and anti-mosque sentiment? Why are mosques targeted? Has Europe failed to protect its mosques? Are mosques the least protected under European law? Is it because of the media's reporting of Islam and Muslims? Or is it because Muslims are failing to demonstrate the true Islam?

The problem is, of course, serious and the challenge ahead is to make mosques safer places for worshipers. What could make this happen? More police patrolling, the media reporting positive visuals, Muslims engaging with non-Muslim neighborhoods and what else? Also, why is that one set of troublemakers’ religion comes under fire in the media?

Soon after the Christchurch attacks, U.N. Secretary-General Antonio Guterres announced a U.N. plan to make mosques a “safer haven, not sites of terror.” It seems this is just another speculative attempt from the U.N. to ensure human rights in the conflicting regions of the world; therefore, it’s questionable whether it will succeed.

In Britain, security services have successfully foiled several far-right plots to bomb or carry out shootings at mosques.

The matter is of course quite serious, as most far-right radicals are turning toward mosques. Worryingly, graffiti being painted on mosques, acts of vandalism, windows being broken and spitting on mosque-goers, especially bearded men and veiled women, has become far too common.

In recent years, a series of mosque shootings and stabbings that transpired in France, New Zealand, Norway and Britain raised concerns among all strands of decent people committed to fostering community cohesion.

Some critics believe that Muslim suicide bombers involved in the July 7, 2005, London bombings or other similar attacks in Europe were radicalized in mosques. Is this really the case? Think of British double agents like Kim Philby; no one ever blamed the institutions he attended.

Those believing in this argument have to do in-depth research to prove this point. The Pacific Standard wrote the opposite in “Most terrorist victims are Muslim,” while the World Economic Forum published on its website, “Terrorists don’t kill for their religion. It’s something else entirely.”

Robert Pape, an authority on the subject of suicide bombings, discredits such arguments in his widely praised book "Dying to Win: The Strategic Logic of Suicide Terrorism." Pape dismisses the claims that all suicide bombers are inspired by religious ideologies.

It’s pity but true that in almost all mass shootings occurring in America and Europe, including the famous Norway shootings, the perpetrators' portraits were described as lone wolves, from a dysfunctional family, sexual failures, possessed by grotesque narcissism, having delusions or experiencing dreams of martyrdom, with no mention of religious affiliation.

Again, in the Norway attack, committed by a white supremacist, no one suggested that he was radicalized in a church.

In contrast, as soon as any terror incident happens, most Western media is quick to establish links with Islam and mosques. It sells papers but also shapes public opinion about mosques by asking whether these are places producing radicals, extremists, and terrorists.

British writers such as Miqdaad Versi and Vikram Dodd have gathered piles of evidence that show how sections of Western media are behind rising Islamophobia and hate crimes against British Muslims.

The media manipulates this mindset through documentaries, articles and features in which it incorporates the opinions of a few self-proclaimed scholars and imams. The best example of such an approach can be seen on the Channel 4 program "Dispatches" with its episodes of "Undercover Mosques" and "No Women in Mosques."

The liberal British press just barely countered with “Visit my Mosque,” which shows Muslim institutions as food banks and shelters for homeless people. One must also remember that it was the same liberal British media, including The Guardian and The Independent, that avoided publishing the ill-minded caricatures of the prophet of Islam and discredited attempts to demonize Muslims.

Sections of Western media are often blamed for underreporting mosque abuses, particularly violent attacks. The Atlantic noted this in their piece, "The Media Still Haven’t Figured out How to Cover Acts of Violence."

Evidence shows that for years, most of the British mainstream broadcasters and tabloid press have purposely raised the profile of a few self-declared and self-appointed religious scholars. These include: Anjem Choudary, Abu Hamza al-Masri, Abu Qatada al-Filistini, Omar Bakri Muhammad and Hani al-Sibai.

These six so-called imams appeared throughout the British news media, mainly in connection with waging war against non-Muslims in Europe. Their rhetoric promotes extremism, violence and radicalization in Britain by endorsing jihadist activities, spreading hatred of European non-Muslims and willing Sharia law on all secularist Muslims and non-Muslims.

Worse yet, they were presented as appointed imams and symbolized figures of the British Muslim community, despite the fact that the Muslim Council of Britain never endorsed any of these people, nor their actions or teachings.

A series of comment pieces, articles, editorials and features were published, short and long documentaries were produced and British Muslims were wrongly portrayed by these systematically manufactured media figures.

As a result, British and European Muslims were put under a media spotlight, and ordinary citizens were brainwashed into believing that Muslims wanted to take over Britain and Europe.

Obviously, ordinary readers, with almost no knowledge of Islam and Muslims, were fed news that mosques are the hubs of radicals and terrorists.

Furthermore, images of Friday worshippers praying in closed streets were printed to give the impression that perhaps Muslims are on a mission to take over Europe.

Evidence shows that most media reporting on Islam and Muslims is negative, particularly since the July 7, 2005, London bombings.

The Muslim Council of Britain says, in one of their leading studies conducted on the media, that there is a constant harmful portrayal of Muslims and mosques. Additionally, this negative reporting by Western media outlets is the primary reason for the rise of anti-Muslim and anti-mosque sentiments. Some of the media images and headlines that are profoundly popular are: children reading Quran in the madrasa (school within a mosque), mosque minarets with a crescent, a bearded man in long robe giving a sermon, protesters chanting slogans like "Allah hu Akbar" ("God is great"), the call to prayer, large congregations of Muslims and imams beating children.

Despite this noticeable bias, there is also enough evidence to give credit to some of the liberal British press, including The Guardian and The Independent, that continue challenging the anti-Muslim prejudice.

So what do these images and headlines suggest to an ordinary person in the West who knows nothing of Islam? This is how the media shapes public opinion.

It is unsurprising that a growing number of mosques are under attack, and Western countries are trying to close mosques and expel imams under the pretext of “national security.” It is all part of an anti-Islam campaign, fear-mongering pushed primarily by right-wing media.

A solution for limiting the growing attacks on mosques is a more engaging approach. One that sets up diverse communities that include members of the press and interfaith groups.

This is exemplified by The Guardian in its series of editorials and opinion pieces, highlighted by their article "U.K. mosques should appoint British-born imams."

Given that attacks on mosques are a continuous challenge, it is time to question whether Western media is responsible for the rise in anti-mosque sentiment. If so, then what can be done? How about setting up a cooperative workgroup that includes Muslims, mosques and media professionals.

*British-Pakistani political analyst and human rights activist based in the U.K.