Why Operation Irini can be a fait accompli 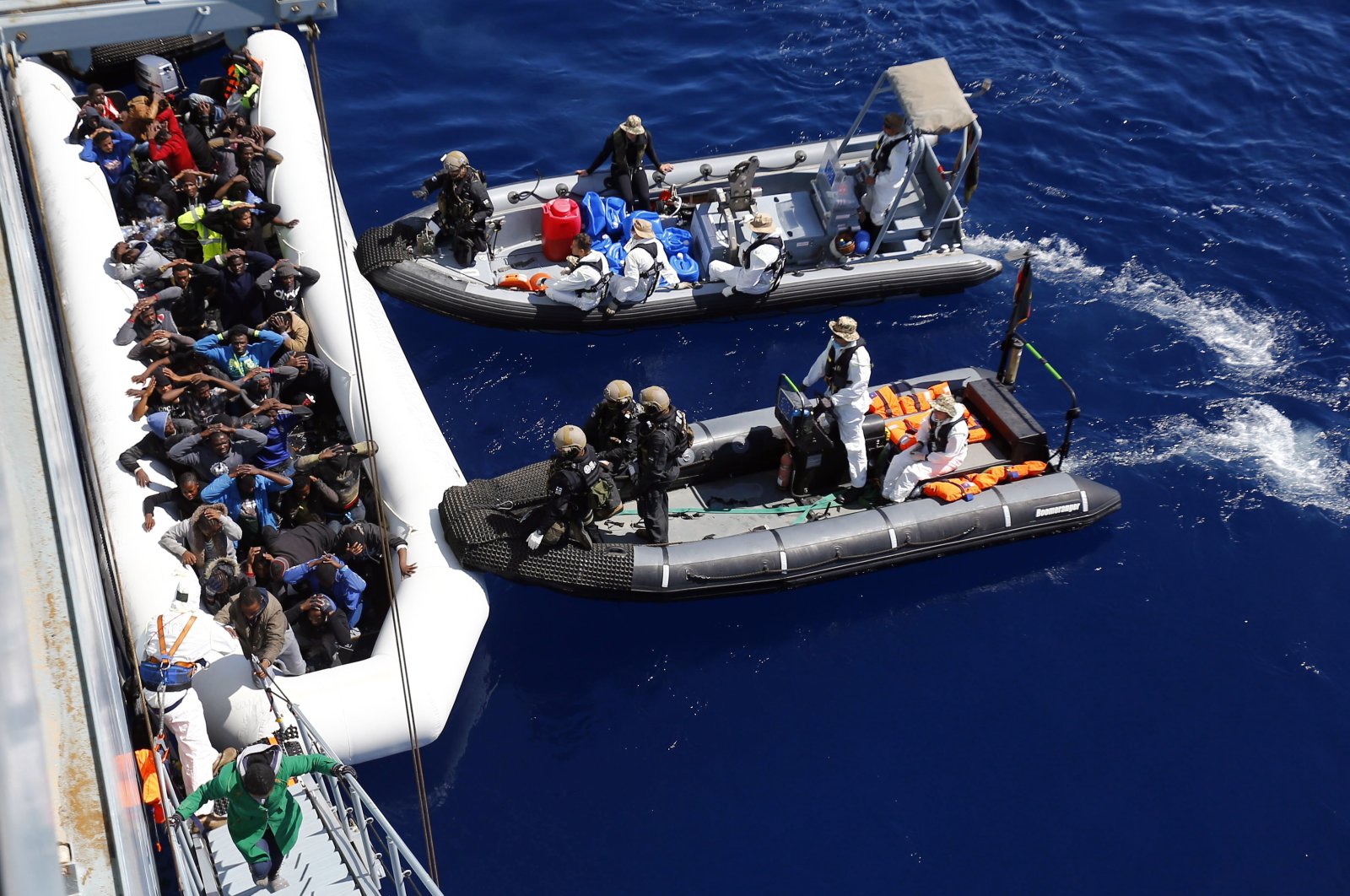 German navy sailors and Finland's special navy forces help migrants to board the German combat supply ship during the EU's Operation Sophia in the Mediterranean Sea off the coast of Libya, March 29, 2016. (AP Photo)
by Bilal Sağlam Aug 12, 2020 12:05 am
RECOMMENDED

With the tension mounting in Libya, the European Union has launched a naval operation called "EUNAVFOR MED Irini," or simply Operation Irini, to enforce the United Nations' arms embargo. Operation Irini is a continuation of previous efforts of the EU to ensure stability in both Libya and the Eastern Mediterranean through joint military operations. However, the EU attempt seems to have been futile, due to Irini’s nature as an act of compellance and its recent target, Turkey, which has tried to secure its existential interests.

First, Operation Irini is by all means an example of compellence. Compellence is the effort of a state or states to change the existing behavior of another state through the use of force. Since the countries supporting the parties in the Libyan conflict have granted technical, financial and military assistance to gain an upper hand in Libya, Irini tries to utilize coercive naval power against intervening countries by blocking their logistical support and forcing interveners to refrain from supporting conflicting parties in Libya.

But compellence, as American economist Thomas Schelling puts it, is a costly option for countries since it targets an existing action of another country in order to change it. It also damages the face-saving values of countries, which are naturally vital for both their coercive power and image in international affairs.

Turkey has been targeted by the EU's compellence in the Eastern Mediterranean. Irini has led to incidents of confrontation between Ankara and Brussels, as Turkey considerably boosted its support for Libya’s United Nations-recognized Government of National Accord (GNA) before the initiation of the EU’s naval operation.

France recently declared its uneasiness with Turkey over claims its naval unit was targeted by the Turkish navy while approaching to inspect a Turkish civilian vessel en route to Libya. Greece also demanded to check a cargo vessel but could not achieve its objective due to a rejection by the Turkish navy.

Despite seeming like an arm-wrestling competition, these incidents portray the futility of resorting to compellence against Turkey in the Libyan conflict. Aware of the costs incurred by abandoning support for the GNA, which has invited Turkey to support it militarily, Turkey would not want to risk losing its power of coercion in regional affairs.

On the other side, as similar incidents of confrontation could be experienced in the future, the costs of the inability to compel intervening parties would raise more questions regarding the EU’s military deterrence, making Operation Irini a self-destructive endeavor in times of strained relations with the U.S. and NATO.

The fragmented attitude of the EU countries toward Operation Irini also challenges the possible success of this military activity. While Malta and Italy support the GNA, France and Greece have sustained their support for putschist Gen. Khalifa Haftar, making Irini a less promising and more costly act of compellence.

While Turkish authorities have been criticizing Operation Irini for not targeting other parties’ logistical support delivered by land and air, the EU has created a significant stumbling block for itself to enforce an arms embargo on all intervening countries. Hence, such a naval operation becomes a less successful compellence activity while increasing the costs regarding the coercive power of the EU.

Turkey’s engagement in the Libyan conflict differs from the involvement of other countries in one aspect: the maritime deal signed with the Tripoli-based government. This reality also makes Turkey less permissive to the EU’s military actions that put the GNA at a disadvantage.

In January 2020, the Turkish Parliament passed a mandate to use force in the Libyan conflict following two memorandums, including a maritime deal, signed between the Turkish government and the GNA. The negotiations on a maritime deal between these two countries date back to the era of ousted leader Moammar Gadhafi. Since then, Turkey has intervened in the Libyan conflict by supporting the GNA against the so-called Libya National Army (LNA) and its warlord Haftar.

Most importantly, Turkey’s concern over the exclusive economic zone (EEZ) in the East Mediterranean makes its support for the GNA against the LNA a sine qua non because the latter perpetually decried the maritime deal as “illegal” despite the deal’s endowment of a larger zone in an agreement with Turkey compared to other countries.

In this regard, rather than analyzing Turkey’s efforts in Libya as “flexing muscles,” the Libyan conflict portrays a wider picture in which Turkey’s existential interests are at stake. Having the longest shore in the Eastern Mediterranean, Turkey tries to secure its economic interests endowed by international maritime law by resorting to hard power, which will create diverse ramifications for its future in a scenario of inaction in the region.

Such a scenario incentivizes Turkey to utilize its military power more as future national interests concerning EEZs are at stake. Therefore, any attempt endangering the GNA can push Turkey to take a tougher stance, paving the way for greater tension in the Eastern Mediterranean.

Considering the rarity of Turkish unilateral military operations overseas, Libya marks Turkey's second attempt after the Cyprus intervention in 1974. Hence, Libya seems to be within the existential scope of activity for Turkish foreign policy because of its concerns regarding its maritime zones, which would also have equal significance for its future endeavors, regardless of which party is governing Turkey.

Taking these factors into consideration, it seems that Operation Irini originated with birth defects and could not escape being another failed attempt of the EU.

To ensure stability and handle asymmetric threats in the Eastern Mediterranean, the EU needs to build inclusive settings and activate overarching diplomatic channels.

This requires them to first abandon compellence measures such as joint military operations that favor one party over another, and second, to include Turkey in the decision-making process or use hard-power measures such as peace-keeping missions, as the stakes in Libya are extremely vital for Turkey.

Considering worsening ties between the EU and Turkey in recent years and the startling instability in the region, inclusive measures in Libya can offer a clean sheet for EU-Turkey relations while ensuring stability that has been long-awaited in the Eastern Mediterranean.

Besides, the EU’s subsequent decisions in Libya will also be another litmus test of the West’s determination for the prevalence of democracy and democratic norms pertaining to their support of a popularly elected government, or for Haftar, an upcoming dictator who resorted to a coup d’etat against a democratic assembly.

So far, Athens and Paris seem to prioritize “interests” rather than norms while persistently resorting to the defamation of Ankara because of its support to the GNA. Therefore, once again, the Libyan conflict will not only witness the clash of interests but also the struggle of norms.

*MA student in the International Relations Department of Bilkent University