Why we forget, how we remember: The Tripolice massacre 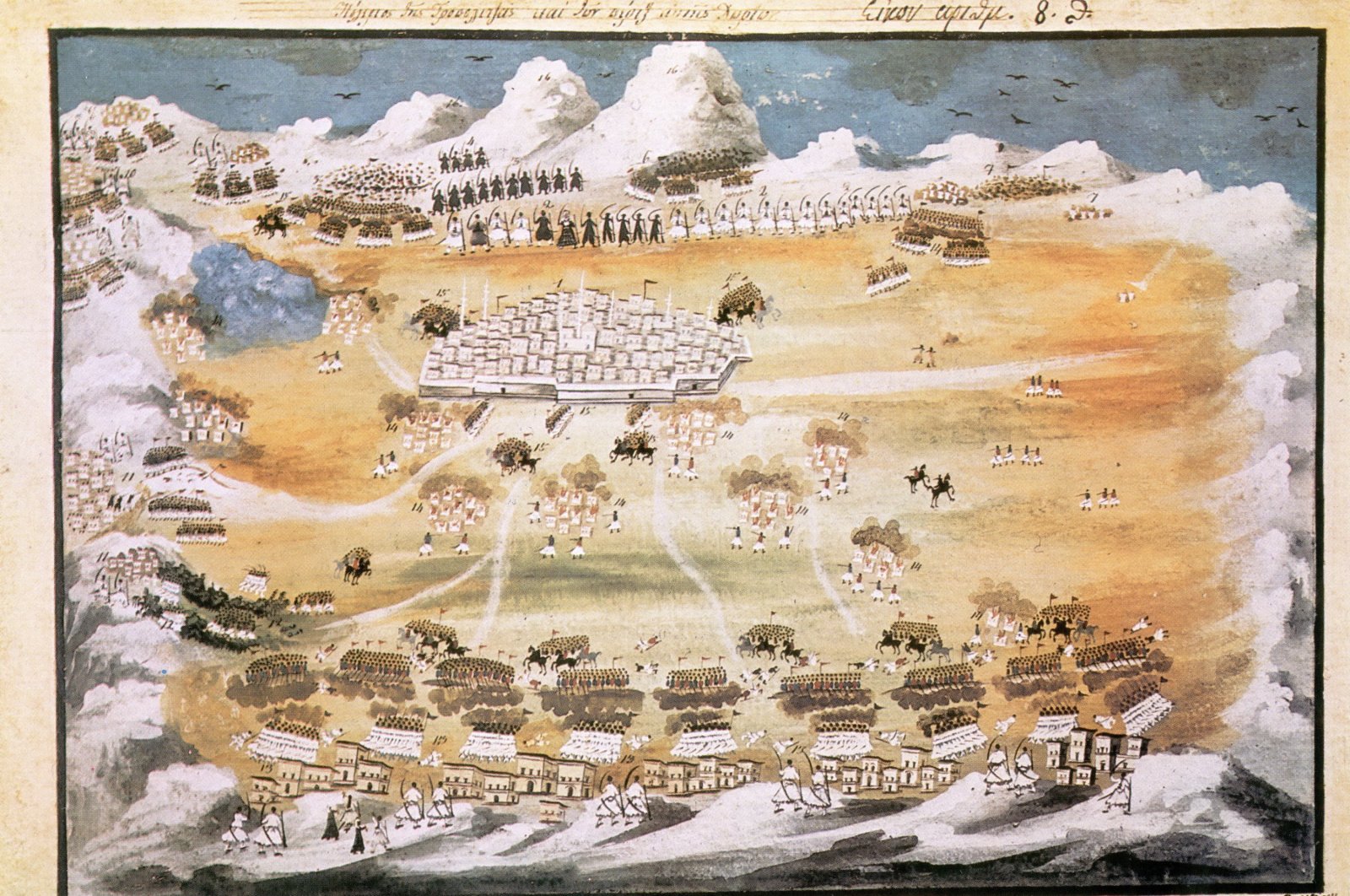 The painting by Greek painter Panagiotis Zografos shows a scene from the Tripolice rebellion. (Wikimedia Photo)
by Meltem Sarsılmaz Nov 03, 2021 12:05 am
RECOMMENDED

In late September, Turkey remembered the 1821 Tripolice massacre that resulted in the killing of thousands of Turks in the central Peloponnese in Greece. The Foreign Ministry said in a statement, “Those who make the mistake of teaching others by distorting the historical facts at every opportunity should know that their own atrocities will never be forgotten and should face the facts sincerely.” So, what happened 200 years ago in the Peloponnese?

The wave of nationalism that started in Europe in the 19th century affected different nations living as Ottoman citizens and caused subsequent revolts and rebellions in what we can call Ottoman lands. To dissolve the Ottomans, many states, particularly England, France and Russia, provided support to these revolts.

The Greeks’ rebellion, however, had a greater impact in Europe. For the intellectuals who dreamed of reviving Europe based on the Hellenic dream, the Greek revolt almost meant a struggle for the freedom of the warriors.

Besides financial support, the anti-Ottoman states provided human resources to back the rebellion. For example, numerous people were sent to the Peloponnese. Hellenic friendship committees were established in the big European cities, while football matches were organized to support the Greeks.

Intellectuals, for their part, began writing articles on this subject to support the Hellenic idea. For example, the reason for the translation of classical Greek works was to revive this consciousness and the Hellenic spirit. In this context, the Ottomans had to be portrayed as an oppressive power.

Encouraged by all the support, the Greeks turned the Hellenic dream into a bloody nightmare. This is how the story that ended with the murder of thousands of people started some 200 years ago.

Beginning of the end

During the period that prompted the revolts, there was a popular song sung by Greek gangs. “In Morea shall no Turk be left. Nor in the whole wide world,” the song's lyrics said – making the real intent of the revolts clear.

The Greek rebellion that started in March 1821 began to spread by April. The villages were first targeted, and the chaos then spread to the center of the Peloponnese, as far as Tripolice. Before the riots, the Turkish population was around 6,000; however, with the arrival of Turks fleeing the massacre in the countryside, the population increased to 30,000. As a result of the massacres that started in almost all of the cities in the Peloponnese, thousands of Turks were killed. Those who fled the violence sought shelter in castles and cities surrounded by walls. The Turks had no weapons to defend themselves and lacked supplies. Hunger enveloped the region, and Turks asked that the Greeks let them leave. Although the Greek rebels accepted their surrender on the condition that the Turks leave for Anatolia, the Greek forces did not keep their word and those who had surrendered were massacred. Men were slaughtered, and women were taken captive and sent to the slave markets as sex slaves. In this massacre, not only Turks but also Jews were killed. Likewise, the Jews who took refuge in the castles with the Turks were massacred.

About this notorious moment, famous historian George Finlay wrote: “Turkish families in hundreds of villages were destroyed. The bodies of men, women and children were randomly thrown into houses outside the village and set on fire. This is because no Christian wants to disgrace himself enough to dig a hole and bury the body of an unbeliever.”

Like Finlay, several other historians and writers wrote about the massacre. There were even some writers, who despite being under the influence of Hellenistic romanticism, could not turn a blind eye to what happened in Tripolice and criticized the massacres. Today, however, this inhumane massacre is somehow again ignored by the world press.

Even though centuries have passed, pain, social trauma and emotions are transferred from generation to generation, forming social memory and social identity. Even while examining the relations between Turkey and Greece today, history must be taken into account. We need to look at historical relationships, experiences and how this relationship is encoded in social memory. Oral history, commemorations and cultural practices also play a major role in this transmission. The sense of partnership created during the transmission ensures that this history is passed on to other generations. Commemorations and rituals are important factors in the formation of community identity. They are also the foundation of remembering. For this reason, historical events are remembered with ceremonies.

Memory is a type of communication that provides a bond between generations. If this communication is broken or there is an interruption between the transferred groups, "forgetfulness" is experienced in society. Although the Tripolice massacre has not been forgotten, it is a massacre that is not talked about much and is ignored in the rest of the world.

While the Turks were brutally killed during the riots, some European writers and intellectuals who witnessed the tragedy created a historical document by writing down what they saw. However, despite all this, there has been a lack of public reaction about the atrocities that took place.

Nevertheless, of course, the reality of the massacre is proven by historical documents. Almost 40,000 Turks were killed as a result of the rebellions that started in the Peloponnese. Some were brutally murdered, while others died of starvation. The lucky ones were able to escape to Anatolia, but the majority of them were killed after surrendering with the promise of going to Anatolia. The rebellions supported for this reason, which were seen as the struggle for independence of the Hellenes in Europe, caused a human tragedy. As British writer William St. Clair said: “The Turks of Greece left little trace. They were suddenly and completely destroyed in the spring of 1821, without the world's knowledge.” It shows us how unresponsive the rest of the world was while the genocide was taking place. Forgetting may be the best gift ever given to a person; however, in order to create our social consciousness, we must keep our social memory strong and remember those who suffered.