Will Merkel recognize the State of Palestine before stepping down? 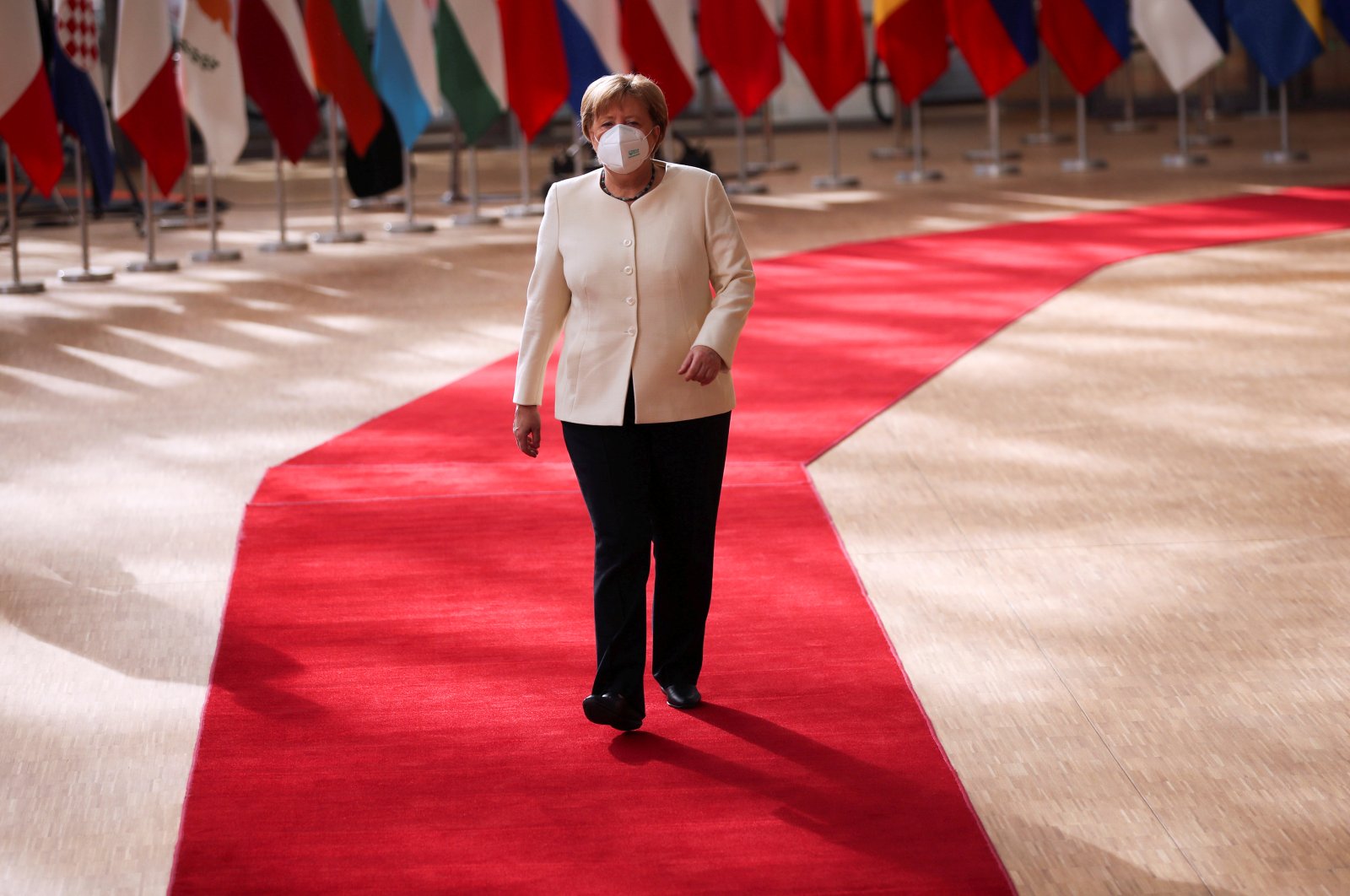 As Germany took over the European Union presidency on July 1, the country’s iconic chancellor, Angela Merkel, who has been in office for more than 15 years, will have the chance to tackle many critical issues before stepping down next year.

When Germany last headed the EU Council, the bloc was heading into an economic crisis. This time, overcoming the problems that face the bloc and Merkel herself will be a historical mission. But the chancellor seems decisive and Europe has become a concern close to her heart.

Ironically, Germany’s EU agenda lists issues that Germany cannot claim to have performed very well in but accepting mistakes is a feature of good leadership. Merkel has another shot at improving Germany’s record, this time in the EU’s recognition of the State of Palestine.

The fulfillment of the inalienable right of the Palestinian people to self-determination is long overdue as a basic human right, and the recognition of a Palestinian state is a fundamental step in that direction. Besides, this recognition will help protect the prospects of the two-state solution, based on the 1967 border.

With Israel, the occupying power, moving ahead with plans of further annexation of occupied territory, the international community must take concrete steps toward ending Israel’s occupation of Palestine.

Ultimately, recognizing the State of Palestine reaffirms the importance of diplomacy, international law and U.N. resolutions in peacemaking efforts. This will be the best way to encourage Israelis and Palestinians to return to the negotiating table and work to level the playing field.

As U.S. President Donald Trump has taken a unilateral approach to foreign policy – by recognizing Jerusalem as the capital of Israel and by blowing up more than 72 years of international consensus in his last move of the so-called peace – the EU must step up.

Germany’s Middle East policy is anchored in Europe’s policy on the region but due to its history, Germany bears a special responsibility for the security of the State of Israel.

At the same time, Germany recognizes the Palestinians' right to their own state and believes that an independent, democratic and viable Palestinian state existing side by side in peace and security with Israel can only be achieved through negotiations.

Besides, Germany is the biggest bilateral international donor to the Palestinian territories and continues to support economic development and strengthening civil society.

For decades, the Israeli-Palestinian conflict has been a continuous source of friction between Israel and the leaders of the EU. Yet, the growing controversy, which mainly revolves around the deadlock in the peace process and the EU’s concerns over Israel’s violations of international law in the Palestinian occupied territories, have deepened exceptionally during Israeli Prime Minister Benjamin Netanyahu’s latest terms in office.

The EU, which repeatedly expresses its desire to promote a peaceful resolution to the conflict based on the two-state solution, uses its "Normative Power," along with various incentives to demonstrate its commitment. Unfortunately, none of the initiatives has led to any substantial advancement between Israel and the Palestinians.

Further, when the EU introduced the "differentiation policy" that included the potential labeling of Israeli products made in the settlements – Israel’s response was fierce and when Israel reluctantly signed agreements with the EU that excluded the settlements, Netanyahu called the decision "hypocritical, and constitutes a double standard ... the EU should be ashamed."

Besides, the EU’s criticism, mostly directed at Israel’s violation of international law in the occupied territories conveyed in various joint EU statements condemning Israel for its human rights record, illegal settlement expansion and military occupation, was described by Israel as hypocritical and harmful for advancing a peace process.

During the past few years of Netanyahu’s premiership, Israel has undertaken significant efforts to strengthen its bilateral relations with the individual EU member states, predominantly those affiliated with Central and Eastern European regional blocs and the Israeli government employed the rapprochement to fortify its global stance and achieve certain political goals.

Besides, after Israeli frustration with the EU’s foreign policy and actions, the former utilized mounting policy divisions among the EU member states to bring about a change in the EU’s approach towards the Israeli-Palestinian conflict. Particularly to limit the EU’s ability to exercise its "Normative Power" by applying pressure on Israel and by improving its international stance, rejecting support for Palestinian statehood, and excluding the possibility of nonexclusively direct negotiations between the two sides to the conflict.

The differences of opinion among Israelis on whether this policy toward the EU truly serves its best interests or not shows that Israel’s government has not fully considered its implications, risking a deterioration of its standing in the global arena, as well as of its ability to resolve the Israeli-Palestinian conflict.

Lately, the EU has increased its humanitarian support for Palestinians as well as its contributions to the U.N. Relief and Works Agency (UNRWA) and devised quick-impact projects in the Gaza Strip to compensate, at least partially, for the U.S. cuts.

Yet, the EU has not been successful in halting or reversing trends of ever-greater fragmentation of the Palestinian territory and loss of socio-political cohesion.

On the contrary, the situation has been worsening rapidly with a concrete risk of the door closing for good on conflict resolution through the two-state approach.

More than half a century has passed, and a resolution to the conflict seems more distant than ever: Palestine is still under occupation, settlement-building is proceeding systematically and daily life continues to become increasingly unbearable for walled-off and cut-off Palestinian communities.

After many failed attempts for a solution, a status quo appears to have set in. The conflict continues to be viewed with discomfort but also with helplessness and a certain disillusionment, as unsolvable while the situation of Palestinians consistently worsens and even optimists cannot easily assume that the current U.S. government will take a sensible approach to the conflict.

In December 2019, Luxembourg’s Foreign Minister Jean Asselborn penned a letter to the EU Minister for Foreign Affairs Josep Borrell stating that the time was right to recognize a Palestinian state. Such a move, he argued, "would neither be a favor, nor a blank cheque, but a simple recognition of the right of the Palestinian people to their state. In no way would it be directed against Israel."

EU Foreign Policy Chief Josep Borell had said Trump’s plan questions "the 1967 border, as agreed by both parties, with the State of Israel and an independent, viable Palestinian state, living side-by-side in peace, security and mutual recognition."

Nine out of the 28 EU member states recognize Palestine, but the bloc as a whole does not.

In 2014, Sweden became the first EU country to recognize Palestine. Malta and the Greek Cypriot administration recognized Palestine before joining the EU, as did several Eastern and Central European states when they were part of the Soviet Union.

However, some of these countries, like the Czech Republic, for instance, have emerged as one of Israel’s closest allies in Europe. The Greek Cypriot administration, for its part, is not taking part in the current initiative due to the close relations it has developed with Israel as of late.

Palestinians expect the EU to be a genuine and influential political actor in the Israeli-Palestinian conflict, taking into consideration the realities of the occupation, which remained for decades a background issue.

By recognizing a Palestinian state, any future Israeli attempts at any annexation can be treated by the EU countries as a conquest of another country by force and not merely an extension of sovereignty by the military occupier over occupied territory, as Israel is proclaiming.

The Palestinian right to self-determination is indisputable and has a solid basis in international law, U.N. resolutions and enjoys overall international legitimacy. Yet, this right has been systemically denied for decades because of Israel’s occupation, and the international community has not assumed its responsibility to fulfill this fundamental right.

Recognition of the State of Palestine will be a unique opportunity and a significant step for Merkel and Germany to regain their footing as leaders. It will also be a push for a peace process based on the two-state agreement, with east Jerusalem the capital of the future Palestinian state.

This conflict remains vital and significant not only for the people of Palestine and Israel but for the entire Middle East and the world.

* Palestinian author, researcher and freelance journalist; recipient of two prizes from the Palestinian Union of Writers
Last Update: Jul 22, 2020 11:06 am