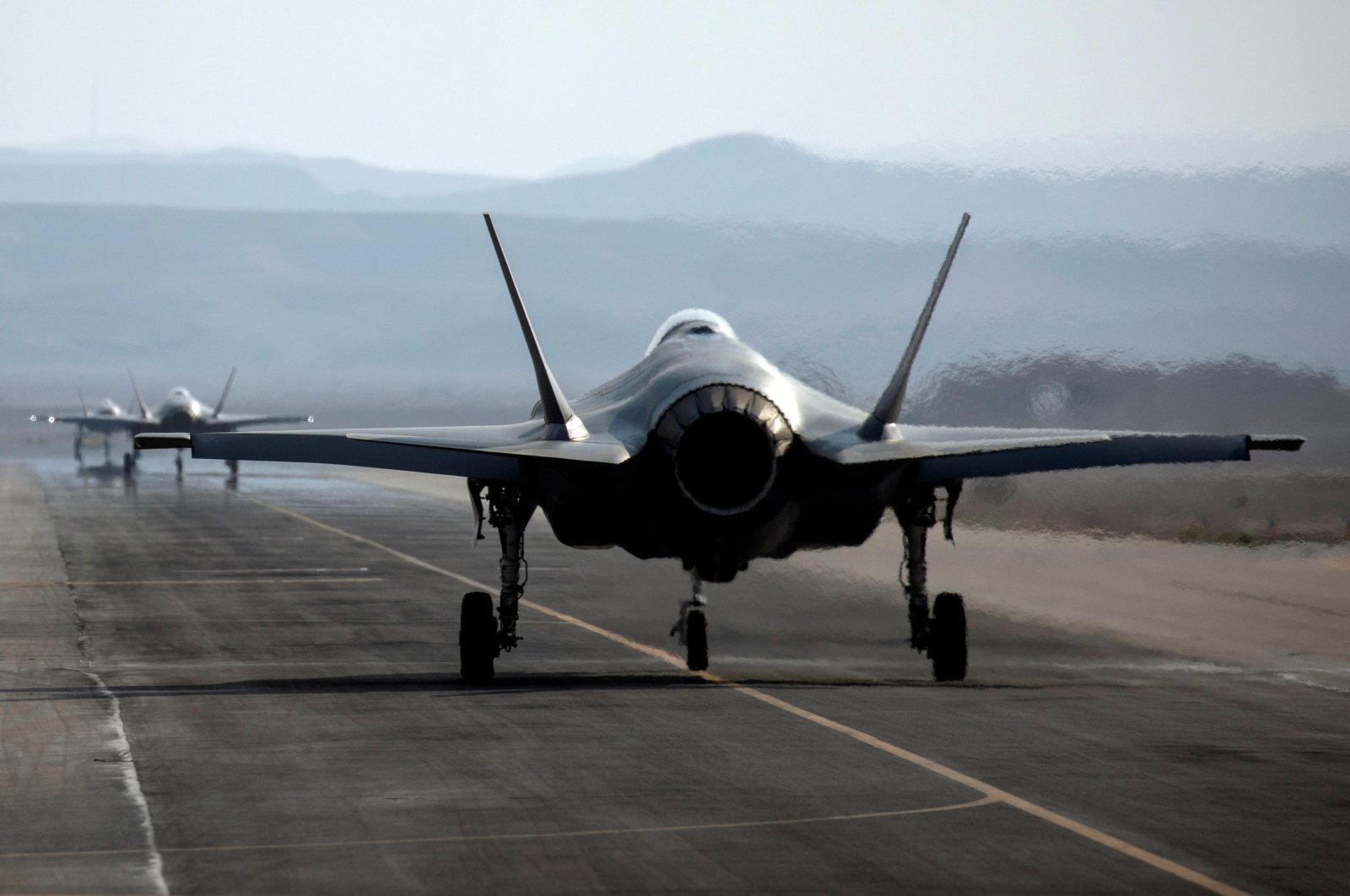 An Israeli F-35 aircraft is seen on the runway during "Blue Flag," an aerial exercise hosted by Israel with the participation of foreign air force crews, at Ovda military air base, southern Israel, Nov. 11, 2019. (Reuters Photo)
by Batu Coşkun Oct 16, 2020 12:05 am
RECOMMENDED

The Abraham Accords – the deal reached between Israel, the United Arab Emirates (UAE) and Bahrain to establish diplomatic relations – has been tied to the UAE’s desire to procure Lockheed Martin’s most advanced fighter jet to date – the F-35. Spectators have noted that the UAE’s possible purchase of F-35 fighters has been part and parcel of negotiations between Israeli Prime Minister Benjamin Netanyahu, U.S. President Donald Trump and Abu Dhabi Crown Prince Mohammed bin Zayed (MBZ), with the UAE asserting that its fleet of F-16s is outdated and in need of replacement.

Netanyahu has appeared to have had initial reservations regarding such a transfer of sophisticated military technology to the Emiratis, hoping to retain Israel’s military superiority in a region dominated by hostile governments. Now though the Israeli position appears to have shifted, with assurances being given by American officials in line with keeping Israel’s tactical superiority intact. This policy is etched into American foreign policy as retaining Israel’s “qualitative military edge” (QME) and enjoys broad bipartisan support, being legally enshrined.

A deal between the White House and Abu Dhabi is said to be in the works for early December, right before the UAE celebrates its national day, meant as a great gesture to the Emiratis by Trump. Senior Emirati officials, namely Anwar Gargash, minister of state for foreign affairs, has claimed that there is no longer any obstacle for such a purchase. Trump, on the other hand, has said that he would be happy to sell F-35s to the UAE, as he views such deals as largely transactional and benefitting American economic interests. Indeed, it was Trump that authorized hundreds of billions of dollars worth of military equipment to Crown Prince Mohammed bin Salman (MBS) of Saudi Arabia, boasting of the size of the deal while he received the prince in the Oval Office.

While Trump might be happy about such a deal, nothing is set in stone for the UAE regarding the F-35 fighters. Such a transaction would have to receive the blessing of Congress, Nancy Pelosi, speaker of the House of Representatives, recently announced that Congress would monitor the sale in a bipartisan manner to ensure that Israeli security is not jeopardized. While potential Israeli lobbying alongside the UAE’s own lobbying machine could work in favor of Abu Dhabi, the plan could very well be shelved altogether by the congressional authority.

Though if the UAE does succeed in securing a deal to receive the F-35 fighters, even with Israeli and congressional blessing, a myriad of problems awaits Abu Dhabi and Washington, complicating such a transaction and opening up new windows for conflict. The first of these would be other Gulf powers – namely Saudi Arabia and Qatar – making a similar move for F35s to not be outgunned by the Emiratis, who have increasingly emerged as the most prominent actor in the Gulf, even shadowing former regional hegemon Saudi Arabia. Second would be the emergence of a far more paranoid and aggressive Iran that could violently lash out against a military buildup in the Gulf. Third would be a possible objection from Turkey, which has recently been excluded from the F-35 program on the basis of acquiring S-400 missiles from Russia.

A UAE Air Force equipped with F-35s runs the risk of upsetting the existing regional power balance, adding a new dimension of militarization to the Gulf sphere. Initially the junior partner of Saudi Arabia, the Emirates is ever more ambitious in projecting power in the region. The UAE is following a unilateral foreign policy trajectory, having broken off from the Saudi-backed campaign in Yemen, bolstered its position in the Horn of Africa and spearheaded the Gulf’s normalization with Israel. F-35 fighters would only serve to feed the frenzy of Emirati ambition that runs foul with several regional actors. Iran would surely perceive such drastic military buildup as hostile, but even Saudi Arabia, which largely converges with the UAE, could become upset by such a sudden shift in power dynamics.

In the possible outcome that the UAE’s procurement of the F-35 aircraft sets a precedent for other Gulf nations – such as Saudi Arabia – to make similar purchases, the Israeli and congressional positions on such acquisitions would likely be unfavorable. American strategic thinking must assess the feasibility of such a purchase, as both the UAE acquiring the aircraft and the precedent it sets with regards to other Gulf states acquiring the advanced fighters is dangerous. Both moves could see a rise in tensions, with sophisticated American military hardware becoming the nexus of such conflict.

Turkey’s exclusion from the F-35 program, despite being a vital member of the aircraft’s supply chain, also adds to the list of possible conflicts that may arise if the UAE were to go through with the purchase. Ankara and Abu Dhabi are major political rivals, and Turkish officials will not be happy to see F-35s that have been withheld from Ankara in the hands of the Emirates. Such a move could push Turkey to further sophisticated military hardware acquisitions from Russia in order to balance the playing field.

The Qatari position is also worth discussion, as the U.S. last week – in comments made by the State Department’s deputy assistant secretary for Gulf affairs – expressed its desire to name Qatar a “Major Non-NATO Ally” (MNNA). This significant designation is enjoyed by 17 other nations, and only by Kuwait and Bahrain in the Gulf. With the U.S. increasing its strategic cooperation with Qatar, which remains at odds with the UAE, it is only natural for Doha to make similar requests for advanced military hardware. Indeed, such requests should also be subject to less scrutiny with regards to MNNA status, and the privileges that it encompasses on the procurement of U.S. military technology.

Can the UAE be trusted?

The F-35 stealth aircraft will become the prime military equipment in Western arsenals for the considerable future. The Trump administration’s transactional view on such sophisticated hardware is foolhardy. The UAE should not be the recipient of such advanced weaponry, as their current position of favor in Washington is not enough to consider them a trustworthy partner. The UAE maintains a close relationship with the Assad regime in Syria, regularly courts Iran by evading American sanctions and has most recently been involved in troublesome endeavors in the region’s geopolitical conflicts, Libya and Yemen to name a few.

Rational decision-making must prevail in the U.S. to prevent the planned transfer of F-35s to the UAE. This can either happen by virtue of Congress, under the pretext of maintaining Israel’s QME, or by the assessment of a potential fallout if the deal were to materialize. The U.S. must be wary of upsetting the regional status quo and hence must act to make sophisticated military hardware unavailable to regimes that could upend the balance.