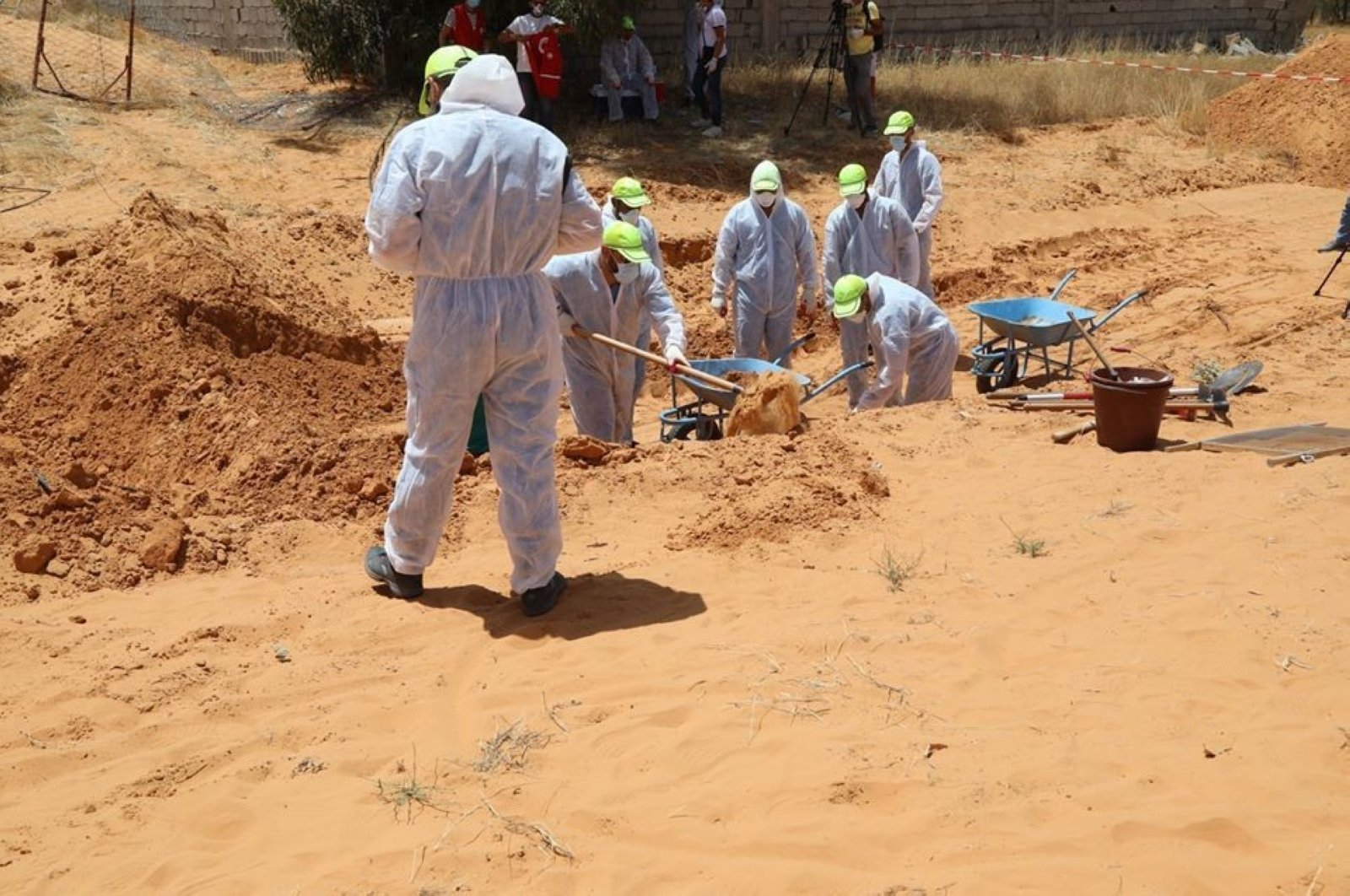 Mass graves have been found in areas liberated by Haftar forces in Libya. (İHA Photo)
by DAILY SABAH WITH AGENCIES Jun 20, 2020 2:58 pm
RECOMMENDED

The Libyan Army said Saturday 190 corpses had been found in morgues and mass graves south of Tripoli and the city of Tarhuna since June 5.
In a statement, the army said 106 bodies, including those of women and children, were found carrying signs of torture inside a hospital morgue in Tarhuna on June 5.
A further 37 bodies were found in another hospital in the city, of which 14 had been identified, the military said. According to a statement, 15 additional bodies were found in the Qasr bin Ghashir area south of Tripoli. The military said the bodies belonged to persons kidnapped by the militia of putschist Gen. Khalifa Haftar.
The remains of 14 unidentified people were also found south of Tripoli on June 6 while 15 bodies were discovered in a well, while a mass grave was discovered near Tarhuna on June 8-10, the army said.
On June 11, the army said three more bodies were found in a mass grave in the same city. It was reported last week that at least eight mass graves have been discovered, mostly in the town of Tarhuna, a key western town that served as the main stronghold for Haftar’s illegitimate eastern-based forces in their 14-month campaign to capture the capital Tripoli. The discoveries have raised fears about the extent of human rights violations in territories controlled by Haftar’s forces, given the difficulties of documentation in an active war zone.
Earlier this week, the Libyan Army said it was awaiting a U.N. report that exposes “crimes and genocides” committed by Haftar’s militia in Tarhuna. U.N. Secretary-General Antonio Guterres expressed deep shock last week at the discovery of mass graves in Libya and called for a transparent investigation. The U.N. chief also called on Libya’s U.N.-supported government to secure the mass graves, identify the victims, establish the causes of death and return the bodies to next of kin.
The Libyan Army recently inflicted heavy blows on Haftar and liberated Tripoli and Tarhuna, in addition to other strategic locations, including Al-Watiya airbase, from his militias. The internationally recognized government has been under attack by Haftar’s forces since April 2019, with more than 1,000 killed in the violence.

Libya's U.N.-recognized unity government also announced that it will boycott talks on the conflict in the North African country to be held by Arab League foreign ministers next week.

Foreign minister Mohamad Taher Siala told the bloc's executive council on Friday that the planned meeting would "merely deepen the rift" between Arab governments on the conflict, his ministry said.

The talks, to be held by videoconference because of concerns about coronavirus, were called for by Egypt, a key supporter of the Tripoli government's archfoe, eastern-based putschist commander Haftar.

Siala complained there had been no prior consultation with his government, even though the meeting concerned Libya, and said the virtual format of the meeting was not appropriate for addressing the thorny issues involved.

The Government of National Accord (GNA) has been in the ascendancy since its Turkish-backed forces defeated a year-long offensive by Haftar's loyalists against the capital earlier this month and drove them out of western Libya.

Egypt responded with a peace initiative that was welcomed by fellow Haftar supporters the United Arab Emirates, Jordan and Saudi Arabia but was widely viewed as a bid to buy time for Haftar's force to regroup.

The GNA and Turkey both dismissed the initiative and called for continued ceasefire negotiations under the aegis of the U.N. Washington too called for U.N.-led cease-fire talks.

The latest escalation has been marked by an uptick in foreign involvement. Recent weeks have seen tensions rise between Turkey and France, which despite public denials has long been suspected of favoring Haftar until his recent setbacks.

The U.N. has urged outside powers to respect a deal reached at a January conference in Berlin, calling for an end to foreign meddling and upholding a much-violated arms embargo.