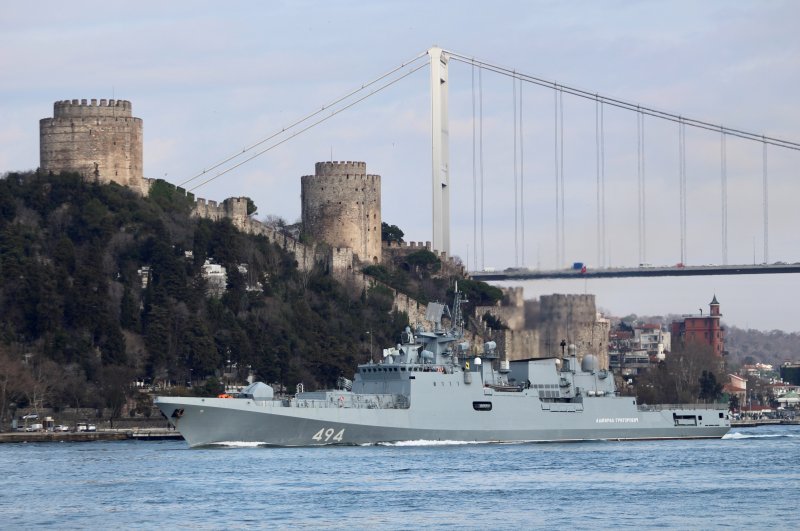 The Russian Navy's frigate Admiral Grigorovich sets sail in the Bosporus, on its way to the Mediterranean Sea, in Istanbul, Turkey, Feb. 28, 2020. (Reuters Photo)
by French Press Agency - AFP Feb 28, 2020 11:27 am
RECOMMENDED

Two Russian warships armed with cruise missiles transitted the Bosporus strait in Istanbul on Friday on their way to Mediterranean waters, as tensions spiraled between Turkey and Russia following the deaths of at least 33 Turkish soldiers in Syria, the Russian military said.

The two Russian frigates – the Admiral Makarov and the Admiral Grigorovich – had earlier left the port of Sevastopol on the peninsula of Crimea, which Russia annexed from Ukraine in 2014, and were transitting the Bosporus and then the Dardanelles straits, a Russian military spokesman said.

He did not specify where the ships were eventually heading, but Russian naval ships that pass through the Bosporus normally head into the Mediterranean to back Moscow's operations in Syria.

The transit came hours after Ankara announced at least 33 Turkish soldiers were killed in Syria's Idlib province after a strike it blamed on Russia's ally Damascus.

Russia said the troops were "where they should not have been" and had been among "terrorists."

The incident has raised new questions about the sustainability of the alliance between Turkey and Russia to bring peace to Syria.

As a Black Sea littoral state, Russia is allowed to have its military ships pass through the Bosporus under the 1936 Montreux Convention on the Straits.

Under its terms, Turkey can only block Russian naval shipping if war is declared or if it feels under an imminent threat of war.

The intense traffic of Russian vessels to and from Syria – known as the Syrian Express – has caused immense curiosity in Istanbul, where the warships pass through the heart of the city in full view of ship-spotters.