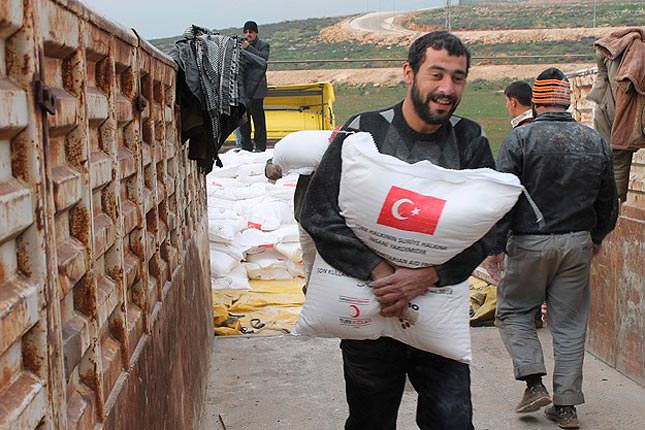 Turkish humanitarian aid to Syria remains significant and imperative to those suffering from the conflict across the border, said head of the Turkish Red Crescent, Ahmet Lütfi Akar.

"People who were displaced could have been starving to death without the aid," said Akar. "As the Turkish Red Crescent, we supply milk, bread and baby food to the region every day."

There is no food production in the region, even of the essentials such as sugar, wheat, and flour. The humanitarian assistance to the Syrian border reaches more than 6.5 million people. Aid should continue as long as the war does, he said.

According to the latest information obtained by Sabah, aid from the Turkish Red Crescent and various institutions first arrives at the Syrian border. At that point, volunteers identified by Turkeytake the humanitarian aid to those in need. The supply processes have been carried out under the supervision of the National Intelligence Organization (MİT) to ensure security.

The Disaster and Emergency Management Presidency (AFAD), under the office of the prime minister, announced on Feb. 17 that the total number of Syrians registered and assisted in 22 camps located in 10 provinces was 218,565, including 109 Syrians receiving medical treatment in hospitals.

The U.N. Refugee Agency (UNHCR) said on Feb. 6 that it started the first of up to 13 airlifts planned to deliver winterized core relief items, medicine, and other supplies to 50,000 internally displaced persons in northeastern Syria.