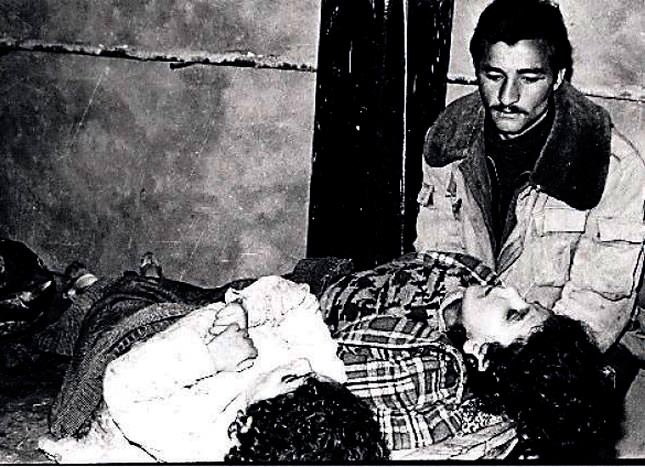 by Feb 26, 2014 12:00 am
A commemorati on for the victims of the 1992 Khojaly Massacre, where 613 Azeri people were killed by Armenian armed forces, was held in Turkey's eastern province of Kars, bordering Azerbaijan on Tuesday. Speaking at the memorial service held in Azerbaijan's Consulate General, Consul General Ayhan Suleymanov said that the killing of Azeri civilians was based on 'Armenian nationalism' and was a massacre against, not only the Azeri people but also the whole humanity. "The wider Khojaly city was razed to the ground that night. Unarmed civilians, including children, women, elderly and patients, were subjected to a mass killing. The aim of the massacre was to annihilate all the people of the city but few of the Khojaly residents survived so as to bear testimony before the history," he said. The Khojaly Massacre is recognized by the parliaments of Canada, Mexico, Colombia, Peru, Pakistan Iran, Bosnia and Herzegovina, Romania, Czech Republic, and the Kingdom of Jordan. The commemoration ceremony was also attended by Kars Deputy Governors Cevat Uyanik and Hakan Alkan along with several non-governmental organizations.

Taken under siege by Armenian armed forces towards the end of 1991, Khojaly was a town of 936 square kilometers where 2,605 families were living, with a total population of 11,356. After the invasion of Khankendi in December 1991, the capital of Nagorno-Karabakh, Khojaly was the next target for Armenians for its geostrategic importance and for hosting the only airport in the region. In 1992, Armenian armed forces took control of all the villages and roads surrounding Khojaly one by one and disconnected the town from other cities. With all the roads to Khojaly blocked, helicopter was the only transport into the town but it also failed when the helicopter travelling between Azeri cities of Shusha and Agdam was shot by Armenians on Jan.28 1992, killing 44 civilians many of whom were women and children. The power supply to Khojaly was also cut off in early January.

Khojaly town was left with local defense forces having only light weapons and a small number of national army soldiers.
On February 25, Armenian armed forces launched an offensive to capture the town and started battering it with support of hard equipment and the personnel of the Infantry Guards Regiment 366 of the former Soviet Union. After almost two hours of artillery and tank shelling, a total of 613 civilian Azeri citizens were killed including 106 women and 83 children, according to official figures. Human Rights Watch said within this particular conflict of the disputed territory of Nagorno-Karabakh, it is "the largest massacre to date." Azerbaijan and Armenia fought a brutal three-year-war over the landlocked Nagorno-Karabakh region in 1991-1994, following the collapse of the Soviet Union. By the end of the war in 1994, the Armenian and separatist forces occupied the territory, which held and currently control approximately 14% of Azerbaijan's territory. A Russian-brokered cease fire was signed in May 1994 and peace talks, mediated by the OSCE (Organization fdr Security Cooperation Europe) Minsk Group, have been held ever since by Armenia and Azerbaijan. Also in his address to his Justice and Development Party (AK Party) group meeting on Tuesday, Turkish Prime Minister Recep Tayyip Erdogan commemorated the Khojaly massacre in Azerbaijan. "The children of Azerbaijan who lost their lives in Khojaly massacre are our children, as well."