Inside group meetings of the parties 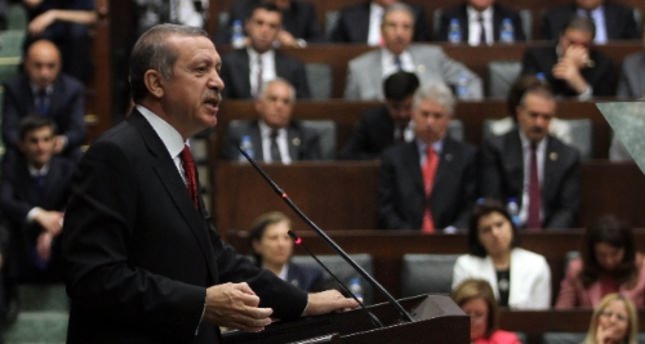 by Feb 26, 2014 12:00 am
In the AK Party group meeting, Turkish Prime Minister Recep Tayyip Erdoğan addressed the voice recordings allegedly belonging to himself and his son, Bilal. The prime minister said the voice recordings are phony and fabricated by the Gülen Movement. He also stressed the changes made to the National Intelligence Service (MİT) in the new bill are in line with European Union standards.

Erdoğan also emphasized the importance of the bill shutting down prep schools. He demanded AK Party parliamentarians work harder ahead of the local elections.

Republican People's Party (CHP) Group Meeting Agenda:
CHP's President Kemal Kılıçdaroğlu criticized the government for the aforementioned voice recordings. He noted turmoil deepened on Dec. 17 after a corruption probe was launched against a handful of ministers' sons and businessmen.
Kılıçdaroğlu said that a new page must be turned in Turkey's history after the probe comes to an end.

Peace and Democracy Party (BDP) Meeting Agenda:
The voice recordings were also in the agenda of the BDP's co-president Selahattin Demirtaş. He said that the government cannot cover the corruption by claiming that the voice recordings are fabricated. He addressed protests in Şırnak's Uludere, a province in southeast, and criticized the police for acting harshly against the protesters.
Nationalist Movement Party (MHP) did not hold group meeting yesterday due to President Devlet Bahçeli's schedule.