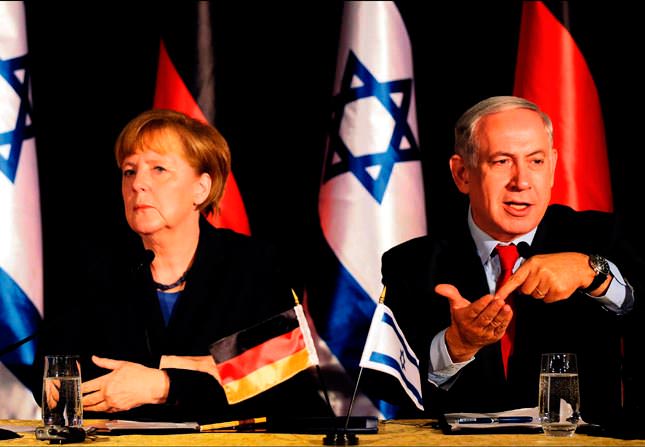 Despite Germany and Israel seeing Iran a treat, opinions differed on nuclear negotiations and Palestine

Chancellor Angela Merkel said yesterday at a joint news conference with Israeli Prime Minister Benjamin Netanyahu Germany views Iran as a potential threat not that just to Israel, but also to European countries, topped short of endorsing her host's demand that Tehran give up all sensitive nuclear projects under any negotiated deal with world powers, and reiterated Berlin's opposition to Israeli settlements on occupied land where the Palestinians seek statehood. Germany is Israel's most important ally in Europe, where the Netanyahu government frets it is losing support given troubled peace talks with the Palestinians. That makes Merkel's views a bellwether of European sentiment on Middle East issues.

The German chancellor visited Jerusalem with her cabinet to mark almost 50 years of bilateral ties with Israel, which was founded in part as a haven for survivors of the Holocaust. "We see the threat not just as a threat for the state of Israel but as a general threat for Europe as well," she said of a potential Iranian bomb, adding that Germany would pursue international talks with Tehran on its nuclear activities. The diplomacy was kick-started with an interim deal in November, which Netanyahu blasted as an "historic mistake" for easing sanctions on Iran while leaving its infrastructure for enriching uranium and potentially producing plutonium. Iran says its nuclear projects are for peaceful needs. Netanyahu, whose country is widely believed to have the Middle East's only atomic arsenal, acknowledged that world powers "talked about the possibility of some enrichment" continuing in Iran as part of a final deal. "I think it's a mistake," he said. "Every single leader that I've talked to in the Middle East agrees with that position, whether they say so publicly or not. Why? Because if Iran really wants just civilian nuclear energy, then they don't need any enrichment. They don't need centrifuges."

Asked if she agreed, Merkel was circumspect. "It is clear that there is a difference of opinion here with regard to these negotiations and whether they ought to take place. We have set out on the path of low enrichment, but enrichment does take place and I believe that we can succeed," she said. She added, "The question is whether we will be able to achieve a result that is better than the present state of affairs. We have decided it is better to participate in the negotiations because we believe that to be better than the status quo." Both Netanyahu and Merkel spoke out against calls in Europe for Israeli products to be boycotted in solidarity with the Palestinians, saying such measures hindered peacemaking.

U.S. Secretary of State John Kerry relaunched negotiations last July with the Palestinians seeking a state in the Israeli-occupied West Bank, East Jerusalem and the Gaza Strip. Yet those efforts have snagged on long-running disputes, including Israel's demand to keep a presence in the West Bank, which it has peppered with Jewish settlements. The United Nations and European Union deems the settlements illegal, a stand on which Merkel gave no ground in Jerusalem. "For a two-state solution we need territorial integrity for the individual entities. In view of this, we regard the settlements question with concern and are not always of the same opinion" as Israel, she said.