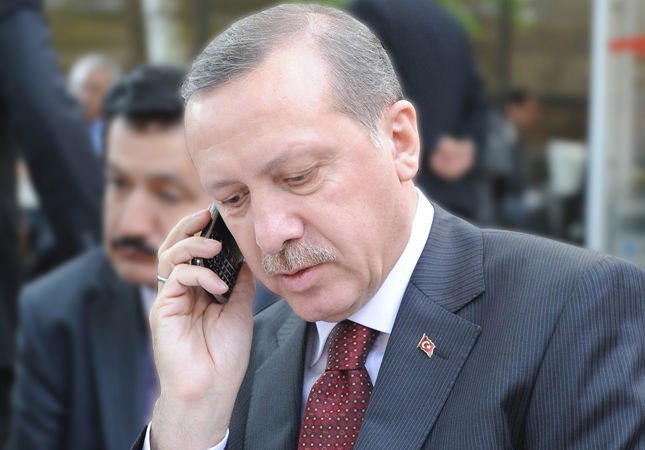 Erdoğan accused the parallel structure of tapping into his private conversations and of releasing a recording in which the prime minister allegedly implies he has millions of euros in his house.

"Parallel structure" is a term used to describe members of the Gülen Movement - also referred to as Hizmet - an organization run by the self-exiled cleric Fethullah Gülen, which has been engaged in a campaign to undermine the government.

After the recordings were posted online, Erdoğan said in no uncertain terms during an AK Party group meeting that they had been fabricated. "They even spied on cryptographic phones [belonging to the] state. [This is why] the minister is creating a new framework in the Scientific and Technological Research Council," the prime minister added.

The speech immediately sparked an investigation by Ankara's Public Prosecutor's Office into the Scientific and Technological Research Council's (TÜBITAK) substantial Center of Research for Advanced Technologies of Information Security (BILGEM), which is responsible of designing cryptographic phones. TÜBITAK also swiftly began a project to change software on such phones to circumvent possible future leaks.

Ömer Adıyaman, an independent journalist who is known for his investigative reports on state secrets, echoed Erdoğan's statements and said that information technology firms belonging to or close to the Gülen Movement have seized control of the significant government databases.

He points out that the Movement first targeted Turkish National Police. "A technology company called Endersys A.S., owned by Barış Şimşek, has received a tender on information technologies with the lowest bid from Security General Directorate (SGD). The company generated the whole infrastructure of the SGD and could see all the information in the database. This corporation has a sister company called Inforcept that is based in Istanbul. Şimşek is also a partners of Inforcept."

Documents published by the whistleblower website WikiLeaks shows that Inforcept sells sophisticated tracking and surveillance tools which are capable of tapping into personal computers, mobile phones and Internet communication. The company uses technology known as Deep Pocket Inspection that can snoop on the contents of personal emails.

Yıldıray Oğur, a liberal leaning columnist from the daily Türkiye, wrote yesterday that the company removed its Turkish page after the journalist had discovered that the Inforcept Networks sold its software to mobile phone operators in Turkey. Ogur said, "B.S. [Barış Şimşek], the founder of Endersys A.S. and the partner of Inforcept became a Chief Researcher at BILGEM last December. Why did a businessman earning a huge sum of money, decide to be a government employee in the midst of Dec. 17 operation?"

Adıyaman claims that Inforcept also has won a TÜBITAK tender to revamp systems at BILGEM and that Barış Şimşek cut his ties with these Gülen-linked companies in order to protect himself from the prosecution and became a "humble" public servant.

Oğur stated that an investigation into bugs found in the prime minister's office two years ago revealed that Endersys and five other technology firms have been infiltrated by the Gülen Movement. "Representatives of these companies generally meet at a prep school owned by the movement in Istanbul's Ümraniye. Sometimes they see each other in Ankara for other purposes. It is very clear that there is a gang inside the state trying to suffocate Prime Minister Erdogan."

Endersys has refuted the allegations and said that a lawsuit has already been filed in response to Adıyaman's claims about the company. Şimşek could not to be reached for comment.