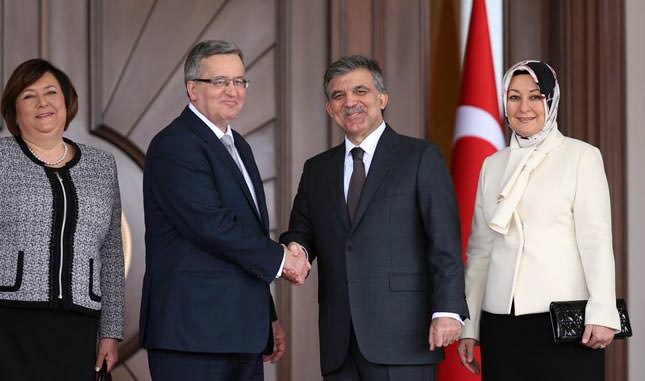 Istanbul (Daily Sabah) - President Abdullah Gül met with Polish President Bronislaw Komorowski yesterday to celebrate the 600th anniversary of the establishment of diplomatic relations between Turkey and Poland. An issue important to both countries is the current situation in Ukraine.

Gül noted Turkey supports a solution that preserves Ukrainian unity, political stability and sovereignty. He emphasized the importance of a peaceful resolution to the conflict in Crimea. "Turkey, Ukraine and Russia are neighbors," said Gül. "Therefore stability and security in this region are priorities.

Turkey has been closely and actively watching the recent developments in Ukraine and we were one of the first to establish diplomatic relations after the government changed." The Turkish president expressed his hope that the crisis would be resolved through dialogue in order to avoid a second Cold War that would threaten countries around the world. Gül also touched on the wiretapping scandal and mentioned he recently commissioned the State Supervisory Council (DDK) to investigate the matter, along with other issues such as corruption and the selection of public officials.

The investigation will also identify precautions that must be taken and laws that should be introduced to address these issues. Both presidents discussed developments in the region and reviewed bilateral agreements to enhance economic and trade relations. Both expressed their wish to encourage bilateral investment and emphasized the significant potential for both countries in terms of industry and tourism. President Komorowski expressed Poland's desire to see Turkey in the European Union and referred to both countries' cooperation in NATO. "Fifteen years ago, Turkey supported Poland's integration into NATO, and now we support Turkey's membership in the European Union" said the president.
Last Update: Mar 06, 2014 9:40 am
RELATED TOPICS