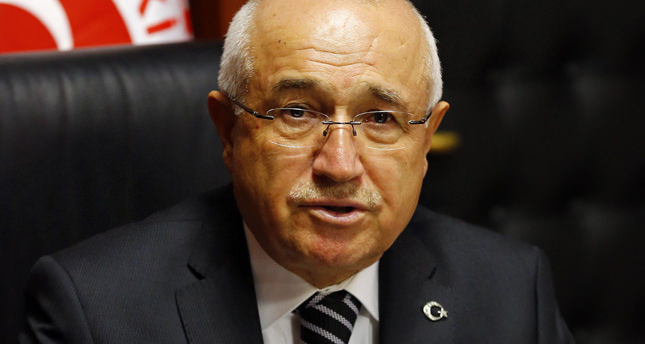 by Anadolu Agency Mar 07, 2014 12:00 am
Ankara - "Shadow" groups' involvement in Turkish politics is illegal regardless of whether they are in conflict or cooperation with the state, says Turkish parliamentary speaker. Turkey is experiencing the unwanted results of some "shadow" groups' attempts to influence politics, according to the country's parliamentary speaker Cemil Çiçek.

In an interview with Anadolu Agency, Ciçek said the way these groups engaged in politics would be illegal, regardless of whether they were cooperating or in conflict with the state. Ciçek was speaking on the wiretapping scandal which has targeted high-level politicians, including Prime Minister Recep Tayyip Erdoğan, and the involvement of "parallel" circles in Turkish politics. Ciçek said any issue involving those circles could be brought into political discussion, but any solution to these problems should be sought within the framework of legal principles. "Evidence obtained via illegal ways should not lead to a legal decision.

If we were to convict someone on wiretapped talks, this should definitely be a judge's decision. If there is no juridical decision, arbitrary wiretappings should only be a subject of politics," he said. "We, as Turkish people, have double standards regarding such issues. This is a sad reality. If the victims of illegal acts are one of 'us', we start a row; we act on the contrary if the victim is one of 'them.' This makes our job difficult in revealing the facts," Ciçek added. In February this year, Turkish dailies revealed that Prime Minister Erdoğan's secure phone line had been tapped and that cryptology experts, who had designed his secure phones at Turkey's main research funding and science management organization, Ankarabased TUBITAK, had left the line open to be monitored.