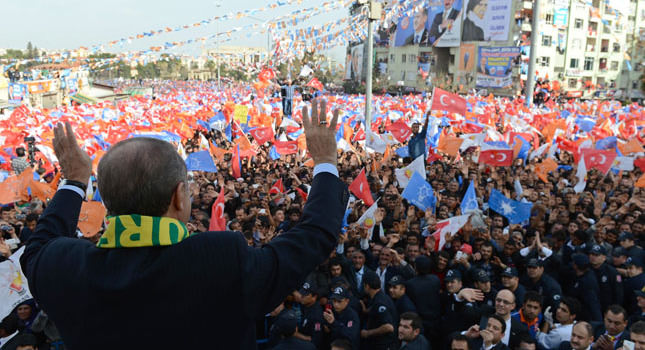 Şanlıurfa - Amid a sea of orange and blue AK Party flags, Erdoğan slammed media outlets for claiming that photos of crowds at AK Party campaign rallies are fabricated. Erdoğan assured his supporters that the AK Party would emerge victorious from upcoming elections and said that ''March 30 will put a smile on not only our faces, but also on the aggrieved ones since you are showing your trust in us here and they are seeing it."

Erdoğan denied corruption allegations against his government and spoke to the crowd about the development in Turkey during the AK Party rule.

Regarding the ongoing reconciliation process with the Kurds and efforts by some factions to derail the process, the prime minister said, ''They tried to close our party to prevent us from solving the terrorism problem. They then sabotaged the Oslo process and tried to arrest the head of National Intelligence Agency (MİT). The Dec. 17 operation was carried out for the same purpose.''

Erdoğan also accused controversial imam Fethullah Gülen and the opposition Republican People Party (CHP) of fabricating voice recordings, allegedly belonging to him, which were leaked online recently. He added that the attitude of the political opposition in Turkey is similar to that before the May 27, 1960 military coup and said that opposition parties have been collaborating with the Gülen Movement, which he referred to as a "parallel state," and are planning to topple the AK Party government.

Later in his address, Erdoğan turned to the AK Party's Şanlıurfa metropolitan municipality mayoral candidate Celalettin Güvenç and asked voters to support him. 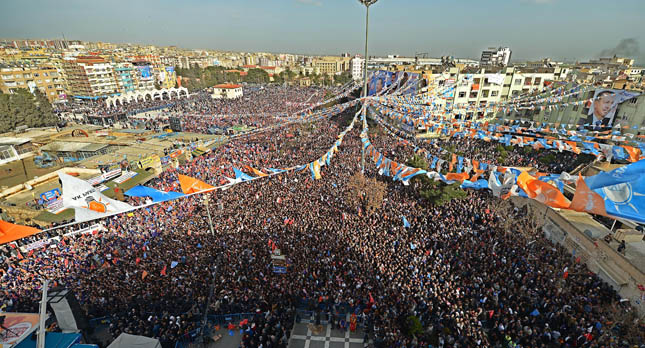 Following the rally Erdoğan travelled to Suruç County and inaugurated the Suruç Water Tunnel, the world's fifth-longest water transmission tunnel. The Suruç Tunnel which will transport 90 tons of water per second from Atatürk Dam to Suruç Valley, meaning it will have a larger capacity than many rivers in Turkey. The Suruç Tunnel will provide Suruç County and 135 surrounding residential areas with modern irrigation. The project will provide $70 million annually to the national economy and direct employment opportunities to 190,000 people.

Even though the elections will focus on the local level, developments in national politics, especially the Dec 17. operation, have caught the attention of many citizens in the region. Retired worker Ahmet Çetin is among them. ''I feel deceived and cheated by the Gülenists. I have given lots of donations to them for many years but it is over now. They have eavesdropped on and blackmailed thousands of people. I did not know that they were capable of such a betrayal'' he said just after he finished praying at the empty tomb of Said-i Nursi, an influential Muslim theologian who inspired many different movements, including the Gülen Movement.

Taxi driver İbrahim shared similar sentiments ''Many people that know and myself, have withdrawn our children from the Gülen-affiliated prep schools. We assumed that these people were sincere and proper Muslims, but during the Dec.17 operation and afterwards we found out that they run like members of illegal networks,'' he said.

Şanlıurfa has a large urban center and the province is home to a 1.8 million strong population. The city is primarily Kurdish but also hosts Arabs and Turkish residents.

Şanlıurfa is located near the Syrian border and is home to a large Syrian refugee population. There are five refugee camps in the province that host more than 100,000 people. Moreover, the total number of refugees is believed to be much higher when the number of people who live outside of the camps is taken into account.

Despite the increased burden on the local community stemming from the influx of refugees, most local people do not complain. "Our business has slowed down due to the ongoing civil war in Syria, but we couldn't turn a blind eye while our brothers were suffering and dying just a few kilometers from us," a local tradesman Halil İbrahim Beyaz remarked as he sat under the shade of a tree in Urfa's central park and took drags from his shisha (water pipe).
The reconciliation process with the Kurds is also at the top of the agenda for people in the region. Ahmet Akçay who describes himself as supporter of BDP said, "You may have only come to realize this recently, but we have known that Gülenists were always against the peace process. They have created enemies for the Kurds through their media." Akçay also added, "Even though I personally don't like Erdoğan and the AK Party, we have to admit that serious reforms have been implemented and barriers on Kurdish language and identity lifted. The most important thing is that people are not killed anymore."
Last Update: Mar 10, 2014 10:09 am
RELATED TOPICS