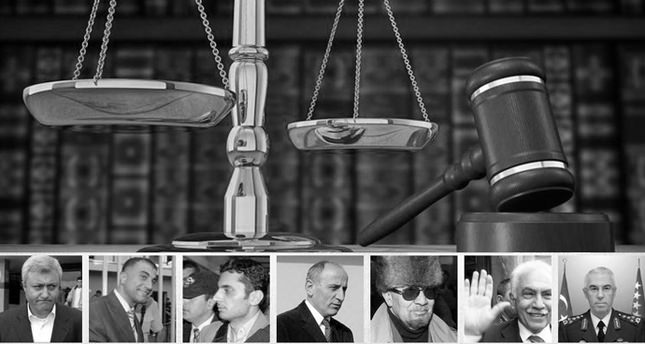 A number of defendants, prosecuted as part of the Ergenekon investigation into an attemped coup against the government, were released pending trial, including journalist Tuncay Özkan and gang leader Sedat Peker

Istanbul - A number of defendants accused under the scope of the Ergenekon trials and other cases have been released as a result of a recently approved bill by President Abdullah Gül to abolish Turkey's Specially Authorized Courts (ÖYM) in an effort to improve the country's justice system.

The defendants were released on the grounds that their imprisonment may result in victimhood due to the fact that their arrests were precautionary measures, but currently there are no grounds that the evidence can be damaged and there were other defendants of their status who have been recently released. Tuncay Özkan, a journalist and politician serving a life sentence at Silivri Prison; Sedat Peker, an organized crime leader; and Levent Göktaş, a colonel were among those released.

Cuma Özdemir, Hamit Çeker, Salih Gürler and Abuzer Yıldırım, defendants from the Zirve Yayınevi Murder case involving the murder of three people - have also been released with an electronic bracelet, except for Cuma Özdemir who lives in a town with no GSM reception.On the other hand, Serdar Ziriğ who has been imprisoned under the scope of the Kurdish Communities Union (KCK) case was also released after over five years of in prison.

Evaluating the releases, lawyer and Parliament member Bülent Turan pointed to the fact that the main motive behind these regulations is to change people's perception, which entails seeing the state as an enemy, [and] to provide them with the sense that they are citizens of the state," Turan said.

According to Turan, the basis of improving the rule of law is to ensure that the law applies equally to all and there are no exceptions for certain individuals.

In response to criticism about the release of defendants who are labeled murderers, Turan stated that it actually stems from the fact that their arrests were not justified even though it has been long since their imprisonment. "The AK Party government has limited this period to five years, but even this is too long," said Turan, who explained that imprisonment should not be a punishment when precautions can be taken through electronic bracelets and prohibition from leaving the country, which will ensure that citizens are tried and sentenced within a reasonable amount of time to improve rule of law in Turkey.

The abolishment of ÖYMs will result in the transfer of cases tried by ÖYMs to high criminal courts and reduce the maximum imprisonment period to five years, paving the way for prisoners to be released after five years.