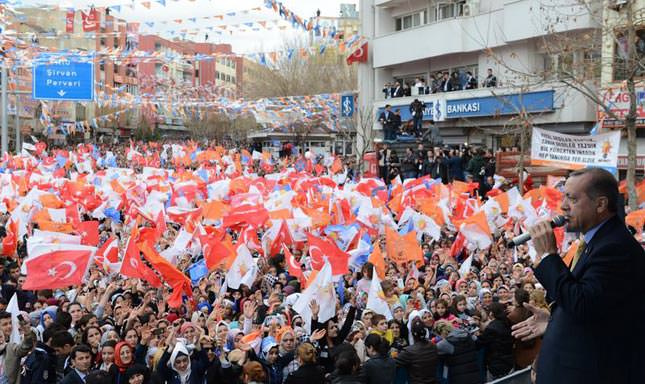 by daily sabah Mar 13, 2014 12:00 am
ISTANBUL – Turkish Prime Minister Recep Tayyip Erdoğan held a rally in the southeastern city of Siirt yesterday ahead of upcoming local elections on March 30. In reference to last year's Gezi Park protests and the Dec. 17 operation aimed at undermining the government, Erdoğan said, "They tried to destabilize Turkey first through the Gezi Park protests and then the Dec. 17 operation, which is a coup plot. I want you to know that they destroyed places with petrol bombs. Is that democracy? The only path to democracy is the one through the ballot box."

He went on to say that the Nationalist Movement Party (MHP), Republican People's Party (CHP) and the Gülen Movement created an alliance and are trying to get citizens to take to the streets. He also accused illegal left-wing organizations, anarchists and terrorists of vandalism in the streets and vowed to hold those organizations accountable.

Referring to the reconciliation process with the Kurds and the democratization package, the prime minister said, "There is a new Turkey now, a country uniting its people. In the new Turkey, people can speak freely and publish books in their native languages. There is brotherhood in this country. We have politics instead of guns."

Slamming CHP leader Kemal Kılıçdaroğlu regarding his claims that the prime minister has bank accounts in Switzerland, Erdoğan said, "Go and find those accounts. If there are [any], I will give you all the money you find."

Touching on the alliance between the CHP and the Gülen Movement, he accused Kılıçdaroğlu of slander. "Their imam in Pennsylvania [Fethullah Gülen] gave them [the CHP] a fatwa [which is legal opinion or ruling issued by an Islamic scholar] to [attack] the AK Party," he remarked.